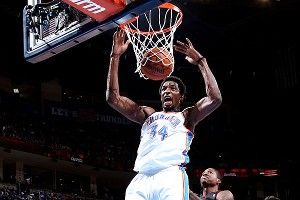 At 4:53 p.m. PST yesterday, I joined everyone else in watching the battle for America’s soul. As I took my place in front of the TV, my mind wandered to what the night meant. This wasn’t about one man. It rarely is. This was about everything. This was about those in blue looking for a handout from a broken system, and those in red pulling themselves up no matter the circumstances. This was about what we, as a nation, want to believe. This was Magic-Bulls on Fox Sports Florida.

The idea came a few hours earlier. A few Grantland staffers were discussing the lack of Tuesday-night TV and wondered which, if any, sports would compete against the election. The answer was three NBA games (and one MAC football game): Bulls-Magic, Thunder-Raptors, Nuggets-Pistons. Because everyone in the office gets twisted enjoyment out of my feelings on this year’s Bulls, the challenge emerged as such: As everyone with a television considered our nation’s future, could I go to a sports bar and watch nothing but mediocre basketball? Challenge accepted.

My evening started easily enough. Just before 5 p.m., I walked into the bar and found a seat in its empty 16-TV’d main room. Election coverage held spots on four of the screens, but one particular seat allowed a vantage point devoid of CNN. Assuming I didn’t look to my right or left, everything would be fine. An Incubus-heavy soundtrack was just loud enough to drown out the sounds of Wolf Blitzer coming from the other room.

The accompanying programming was a perfect cross section of the night’s sports landscape. Six of the 16 screens were tuned to the NHL Network, which was showing reruns of 2011’s 24/7. Next to Sidney Crosby making peanut butter and jelly were David Ferrer and Juan Martin Del Potro, tied 1-1 in the second set of a Barclays ATP World Tour Finals match. At the risk of offending any of the invisible tennis watchers, I requested the Bulls-Magic game be put on a TV replaying last week’s Steelers win. A quick survey of the room gave me an inadvertent look at Romney’s 53 percent hold of Missouri. I hoped it’d be my last.

A comparison between candidates on one screen was mirrored by a comparison between centers on the other. I didn’t quite catch whatever figures Fox was highlighting for both Joakim Noah and Nikola Vucevic, but I’m sure they were both very impressive. Analysis of the stellar post matchup was followed by a few election puns used to describe J.J. Redick’s big night against Phoenix two nights earlier. A spot as the sixth-man-catch-and-fling guy on a team trying to lose games was always J.J.’s NBA destiny.

If there were a good night to wade into the Bulls’ Rose-less existence, last night wasn’t it. Lined up opposite Chicago and its masked-man backcourt was the wonderfully tanktastic five of Aaron Afflalo, E’Twaun Moore, DeQuan Jones, Vucevic, and Glen Davis — the last of whom has been the Magic’s no. 1 offensive option through their first two games. Knowing about Orlando’s roster/long-term plan is one thing. Seeing it is another.

For the most part, the first quarter went how I imagined it might. Only Afflalo did much good for Orlando, and the Bulls’ five were the smart, pro-laden group they are, but relied on a mid-range game made necessary by the lack of a single shot creator. Chicago’s starters remained until the 2:46 mark — because, really, who’s coming in? The answer is apparently Nate Robinson, Marco Belinelli, and Nazr Mohammed. Much like Orlando’s starting five, the first glimpse of the Bulls’ new bench can only be understood through direct exposure.

At around 5:45 p.m., I realized there was only one thing scarier than the Bulls’ reserves — a sneaker-and-beard crew of about 12 who probably weren’t coming to a TV-filled bar to watch Toledo play Ball State. A manager met the group at the door, and when they asked about the election, I knew I was in trouble. Five minutes later, “Everlong” was replaced with Anderson Cooper, and the TVs flanking the Bulls game were both switched to CNN. A member of the group looked up and saw the 37-36 Bulls lead. “This game in Chicago is too close to call,” he said. And I didn’t appreciate his frivolous tone about something so serious.

Few things are more American than the stretch of Hollywood Boulevard between Highland and Vine, and last night, it had a particularly patriotic tone. Each TV visible from the street was tuned to the election, and as I searched for a politics-free site, establishments from sushi restaurants to Western bars were blaring noise about exit polls. Eventually, my walk landed me at a cantina that, while void of League Pass, had the Thunder-Raptors game and music playing.

Oklahoma City was up 20, and by now, there was plenty of Hasheem Thabeet happening on the screen in front of me. Thabeet was shooting free throws when I sat down, and for the first time, I noticed the Rasheed Wallace patch on the back of his head.

Because I’d turned off my phone in full media-blackout mode, I wasn’t sure of the time, but it was deep enough into happy hour for the three women behind me to start into “Champagne Supernova” during the intro to “Soul to Squeeze.” After a Kevin Durant layup, one of them noted that Obama had won Pennsylvania, and without thinking, I looked to the screen tuned to CNN and saw Wolf counting down the seconds until the 10 p.m. EST poll closings. It wasn’t long after that CNN’s sound replaced the music. The volume was just loud enough to pull me away from a 20-point NBA game, and as I looked toward the TV to my left, I noticed that a man sitting at the bar looking eerily like Paul Ryan.

By then, I figured that if the group from bar no. 1 could be waited out, it already would’ve been. I walked back only to see that its entrenchment was now beer-pong deep. The bar was now nearly full, and nothing about the viewing options had changed. The Bulls and Magic still had a few minutes remaining. Earlier, a gentleman had requested the Toledo–Ball State game. The game was still on, but he was gone. Thunder-Raptors ended, but no one bothered to turn the channel. It was official. I was alone.

The Bulls eventually won, with Nate Robinson establishing himself as the team’s best offensive player in the fourth. My enthusiasm was about what it should be after a close win at home against the worst team in the league. When it was over, I asked for a change to the Nuggets-Pistons, but by that point, I was struggling to ignore the election crowd. After each Obama win was announced, there were cheers. The beer-pongers lobbed taunts at the pro-Romney crowd in a far corner. On back-to-back possessions, Danilo Gallinari and Andre Iguodala drained 3s, and as Iguodala’s went down, there was Wolf discussing the other battle going on in Colorado.

Two Ty Lawson free throws gave Denver a double-digit lead right around the announcement that more than 90 percent of the vote in Florida was in. By the time the Pistons cut it back under 10, Iowa, New Mexico, and Oregon had given Obama a 256-191 electoral-vote lead. Then, at 8:16 p.m. Pacific, right after Toledo’s final drive to avoid an upset stalled, CNN called it for Obama. The Ball State sideline danced right along with a crowd of Obama supporters in the streets of Boston.

The bar lights went down, the Kings of Leon cranked up, and Iguodala laid in the ball to give Denver a 103-92 lead. I turned on my phone and started scrolling through the tweets. Amid all the noise was one isolated moment of sanity: “Tonight was the first time since his rookie year Hasheem Thabeet has reached double-figures and only the fourth time in his entire career.” What a feeling, to witness history.