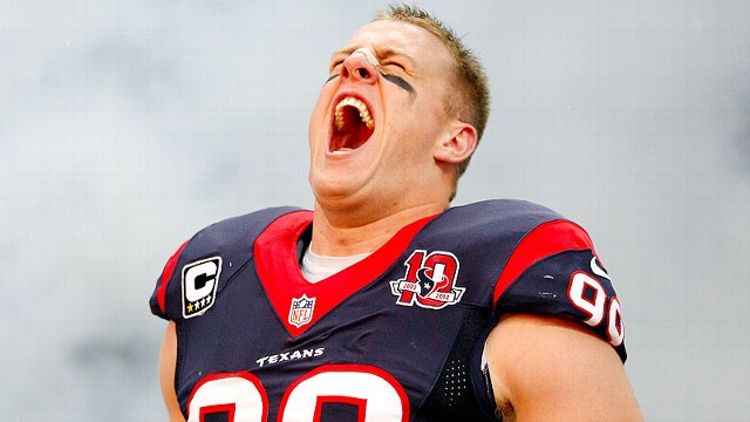 I don’t want to get all self-congratulatory here, but there’s really no way around it. We’ve made it through 15 Warning posts, and not once have I mentioned J.J. Watt. Seriously, go check. This is something for which I should be rewarded. I’m not saying I deserve a trophy, but a commemorative plaque feels appropriate.

You may not know this, but I’m a fan of J.J.’s work. Adrian Peterson’s 2012 was nothing short of amazing, but for me, the best part of tuning in to the NFL every week was watching just what sort of destruction Watt would unleash.

The sack total — 20.5, all of which are shown in the video above — was enough to lead the league and make for one of the best seasons ever, but it’s only the smallest part of explaining what Watt did last season. According to Pro Football Focus, Watt totaled 76 total pressures, good for the fourth-best total in football. This is when we should note that Watt takes the majority of his snaps as a 3-4 defensive end, traditionally a two-gap position not afforded the ears-pinned-back, pass-rush designation given to players like Cameron Wake (whose 86 pressures were tied for best in the league). In short, what Watt did last season as a pass rusher does not happen.

Leading the league in sacks from that position might’ve been enough to warrant the Defensive Player of the Year Award he eventually received, but just for fun, Watt also decided to be the league’s best run-defending lineman. The pass-rush numbers are hard to believe, but the run-game numbers actually seem made up. Pro Football Focus credited Watt with 52 total stops in the running game — 22 more than any other defensive lineman. For the season, Advanced NFL Stats credited Watt with 39 tackles for loss. All-Pro, all-world defensive tackle Geno Atkins was tied for second among linemen — with 18.

In all, it wasn’t just the best defensive season of 2012; it was one of the best defensive seasons ever. The combination of Houston’s scheme and Watt’s skill set means that there’s never a play that he can’t directly affect. The one above is from Houston’s Week 15 win over Indianapolis. The Colts are trying to run opposite Watt’s side, but he beats Jeff Linkenbach so quickly, and so thoroughly, that he’s making the play in the backfield before it even gets started. No player uses his hands like Watt, and it allows him the room to diagnose plays so immediately that he has a chance to disrupt every one.

Watt’s spent the past few months pretty much the same way I’ve spent mine — a lot of batting-practice home runs and making children’s dreams come true. Oh, and casually dropping info about last season like, “All the ligaments in [my elbow] were torn, they were all gone, so they had to have time to recover and regroup. So obviously, I wasn’t at full strength.” When Watt came out after the season and said that he didn’t expect his second year to be his best, Grantland’s Chris Ryan commissioned a very accurate rendering of what Watt would probably look like in 2013. Now, we can probably amend that image to include a fully functional second arm. The only downside to a healthy Watt, for me, is that elbow brace was an easy way to spot him. The downsides for every offensive lineman in the AFC, well … there are a few more.