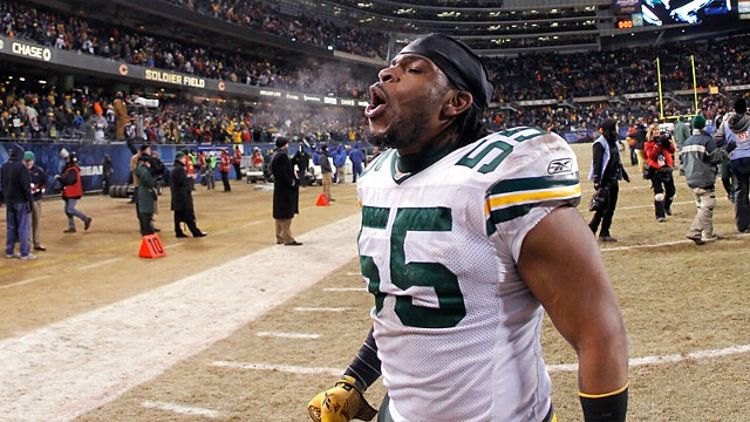 Last week, in a move that inspired five “What the hell is happening?” texts from my best (read: only) Packers-fan friend, Green Bay released inside linebacker Desmond Bishop. Two years ago, Bishop was the best inside linebacker on the Green Bay roster, but he missed all of last season with a torn hamstring. When healthy, Bishop would be an upgrade over both of Green Bay’s current starting options, but judging by the Packers’ choice to cut him loose despite having plenty of cap flexibility, it doesn’t seem like Bishop’s old team was buying his claims that he was good as new.

Not surprisingly, there were several teams in the market for Bishop’s services, including the Chiefs, Giants, and Vikings, but in the end, Bishop chose to be the latest Packer defector to head to Minnesota. When asked if the opportunity to play against the Packers played into his decision, Bishop said this: “It was part of the reason. And if I can get a chance to play against Aaron Rodgers, I think that right there, in itself, is a motivation. You know, you want to play against the best.” It wasn’t an answer that approached Favre-ian levels of bitterness, but that the question was asked at all seems to be all that matters.

I’ve always said that while the Bears-Packers rivalry is more talked about, the one between the Packers and the Vikings is more vitriolic, and the idea of so many players switching sides in the past decade alone just seems hard to believe. From Robert Ferguson to Darren Sharper to Brett Favre to Greg Jennings, and now to Bishop, there’s been plenty of side-switching as of late, and each time it seems to come with at least a few headlines born of players taking shots at old teammates or commenting on how much they’re looking forward to sticking it to the Packers.

Jennings went back and forth with Aaron Rodgers earlier this offseason, referring to him as “the guy they have now” when comparing him to Favre. This came after Rodgers responded with “Who?” when asked about Jennings at an event. There’s a chance it was all in jest, but then again, there’s a chance it wasn’t. This isn’t a rivalry that needs any added factors (Favre was the only one that could really move the needle, but he really did), but it certainly doesn’t hurt. If anything, a healthy Bishop fills one of Minnesota’s biggest needs and makes the actual football part of things more competitive than they already were. But I’ve got to believe that Bishop wants to show Green Bay what they decided to cut loose, and even though this matchup don’t need any added elements, I’m not going to turn away a little more fuel for the fire.