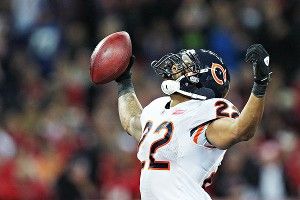 Finally, our long regional nightmare is over. After a contract dispute that began as he was lighting up his 2011 lame-duck season, Matt Forte finally got his long-term deal from the Bears. As Bill Simmons said on Friday about Drew Brees’s situation in New Orleans, the most frustrating part of the Forte saga for Bears fans was just how silly it all seemed.

In his first four seasons, Forte has been the Chicago offense. No, seriously — he’s led the team in receptions in three of those seasons, and for the first half of 2011, he was responsible for almost 50 percent of the team’s total yards from scrimmage. The series of truly stupid things Jerry Angelo strung together in Chicago eventually cost him his job, but the hard line he and management took with Forte last season was the final nail in the coffin for fans.

Any defense for Angelo begins with the premise that the world for even elite running backs in today’s NFL is a strange one. Shelf lives have never been shorter, and of the two backs who got monster deals last offseason, one is nursing a torn ACL and the other fell off the face of the earth for most of 2011. Still, it’s hard not to be irked by the blatant dismissal of a franchise’s best skill position player in at least 20 years.

The terms that Adam Schefter reported seem to be an amenable outcome for everyone involved. Four years and $32 million both protects the Bears from a Chris Johnson–, Adrian Peterson–type investment and gets Forte some guaranteed security at a position where it’s so hard to come by. I know us Bears fans will be breathing a little easier, too. The locker room isn’t the only place new GM Phil Emery has garnered some favor today. Congrats on your second big move, Phil. And this one even required more than not being Jerry Angelo.