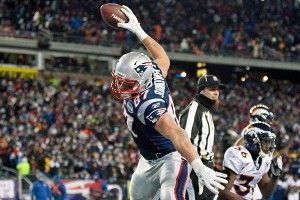 
Gronkowski has parlayed being the league’s most entertaining attraction with being a legitimate top-10 fantasy pick and someone who seems to make one or two plays a game that no one else can make. In-his-prime Antonio Gates was special, but the difference with Gronkowski is that he isn’t merely a product of the NFL as a passing league, where faux-tight ends spend all their time split out as misnamed wide receivers. He’s also a more-than-capable inline blocker who can flat-out punish guys while also catching 17 touchdown passes. We’ll miss the antics as the season beings, but the football is a pretty decent consolation.

July in Sports: By the Numbers

You Really Shouldn't Be Watching Judo