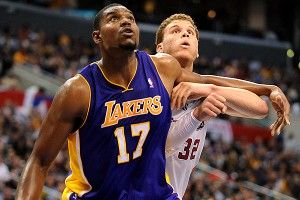 What happens when you combine the NBA’s lockout-shortened season with some unforeseen scheduling quirks? You get 28 Days Later at Staples Center. Here’s how I explained it to my wife yesterday morning:

Me: “Crazy stretch at the Staples coming up.”

Her [immediately suspicious]: “What do you mean?”

Me: “Starting today, the Clippers, Lakers and Kings have 28 home games in 28 days.”

So much for that idea. Hence, a slight tweak: We’re covering these 28 games on Grantland as a group effort. I handled yesterday’s opening doubleheader, which featured a nationally televised Lakers-Celtics game followed by a Clippers-Warriors showdown three hours later. Now here’s a case where Los Angeles might be underrated as a sports city. An NBA doubleheader featuring four different teams, three locks for the 2012 Olympic team (Kobe, CP3 and Blake), five future Hall of Famers (Kobe, KG, Allen, Pierce and Gasol), the league’s most famous rivalry (Lakers-Celtics), the league’s most entertaining team (the Clippers) and the league’s most lovably tortured franchise (the Warriors)?

Quick tangent: I moved to Los Angeles in November 2002 and always assumed I would be gone by now. There are probably two dozen reasons why I haven’t left yet and why I may never leave, but the most underrated one? Having two NBA teams playing 20 minutes from my house. I bought Clippers season tickets in 2004 and probably attend 25 games per season. I don’t attend nearly as many Lakers games, if only because being around 18,000 Lakers fans gives me the same sinking feeling that one of the Walking Dead survivors has when they’re trapped in a school bus or a barn with zombies banging against it. But that’s fine — I like knowing I can go anytime I want. I like that LeBron and Kevin Durant come twice as many times; that I have double the chance to catch a must-see rookie (like Kyrie Irving or Ricky Rubio this season). At this point, I can’t imagine having it any other way.

Occasionally, there’s a day like yesterday, when everything falls into place and Los Angeles feels like the capital of the basketball world. The Lakers and Celtics started things off with one of those exhausting battles that brought back memories of “Hearns-Leonard III” or “Ward-Gatti III” — you know, the third act of one of those boxing trilogies in which both boxers aren’t remotely the same anymore, but it’s still fun to watch them beat the hell out of each other. The Lakers have managed to remain competitive with three elite players and nine guys who range from “below-average” to “somebody needs to drive you to the NBA vet and put you down.” I don’t think there’s ever been an NBA roster quite like it. It’s like making a $200 million blockbuster movie with Will Smith, Charlize Theron and Ryan Gosling … then casting people off the street for every other role. I picked them to finish 34-32, assuming there was no way Kobe, Gasol AND Bynum could stay healthy during a condensed schedule. Wrong. Improbably, they’re contending for the no. 3 seed in the West while steadfastly avoiding any crippling injuries. Nobody thinks the Lakers can win the title … then again, nobody wants to play them in the playoffs.

The Celtics haven’t been as lucky: They lost Jeff Green for the year and Jermaine O’Neal and Chris Wilcox recently, although you could argue they lost those guys the moment they signed them. They went into yesterday’s Lakers showdown with Kevin Garnett, Brandon Bass, Greg Stiemsma and JaJuan Johnson as their only bigs. Yikes. I can’t remember the last Lakers-Celtics game that featured so many players ranging from “mediocre” to “downright useless”: Keyon Dooling, Stiemsma, Sasha Pavlovic, Avery Bradley, Derek Fisher, Troy Murphy, Andrew Goudelock, Matt Barnes, Josh McRoberts … I mean, those were 45 percent of the guys who played, and I didn’t even include Mickael Pietrus, Metta World Peace or Steve Blake (or the four guys who didn’t play). It’s a shame they didn’t make this a “Losing GM Leaves Town” match.

A normally lively crowd of Celtics haters didn’t even wake up until halftime — when the Red Panda Acrobat wheeled out on her unicycle and flipped bowls onto her head — then finally got involved after a Pierce/Peace/Garnett skirmish in the third that almost seemed contrived by all three to get the crowd going. By the fourth quarter, it felt like a playoff game: The Lakers were pounding Boston inside but couldn’t handle Rondo’s speed in transition (or his general you’d-be-crazy-to-trade-me brilliance). Kobe nailed two huge 3s midway through the fourth right as Boston was trying to pull away, then another big jumper after Ray Allen’s 3 had put Boston up five with 2:41 to play. The Celtics never scored again. On the biggest play of the game (up one, under 40 seconds left), Boston tried for a two-for-one possession and ran a perfect play, getting Brandon Bass a wide-open 17-footer that he’d been draining all game. He missed it. The Lakers pounded it inside to Bynum for the clinching hoop and that was that.

The lesson, as always: When you’re running the biggest play of the game for Brandon Bass, you’re probably a no. 8 seed. By the way, I knew the Celtics were in trouble when I noticed Tom Brady sitting courtside. Anytime Brady and I are in the same building, something traumatic happens. We need to go to couples therapy or something. I don’t want to talk about this game anymore.

My friend Chen (fellow Lakers hater) and I quickly scampered out of the building and drove to The Greatest Chinese Food Restaurant Ever to eat away our sorrows. (I can’t tell you the name, or where it is. It’s like Fight Club. You’ll never get the name out of me. Even if you waterboard me.) Just know that I gained three pounds from this meal. Ninety minutes later and loaded with MSG, I caught a ride back to Staples and reentered the suddenly Clippers-friendly arena. How do they turn the building over that fast AND clean it AND fumigate the stink of Lakers fans? It’s a great question.

Like everyone else in attendance, I assumed the Clippers would cruise to an easy victory because (a) they were kicking off a six-game homestand, (b) Stephen Curry sprained his ankle for the 755th time, (c) the Warriors played the night before, and (d) the Clippers have more talent than the Warriors. But when Dorell Wright starts making 3s (four in the first quarter!!!) and the Clippers start bricking free throws (16 in all)? All bets are off. Hey, you know a bad playoff recipe? Poor free throw shooting and bad coaching. I have been following the NBA since I was 4 years old — if the Clippers’ 2012 destiny isn’t losing a Round 1 or Round 2 playoff series in the most excruciating way possible, then I don’t know anything.

The real problem is Vinny Del Negro was hired before the 2010-11 season by Clippers owner/skinflint/slumlord Donald Sterling because the Bulls were paying half of Del Negro’s salary. You get what you pay for. As I tweeted last week, I don’t think the Clippers necessarily need to fire Vinny — they can simply demote him to assistant, or add him as the third man in the TV booth. He doesn’t need to go away entirely. He just needs to, you know, stop being the head coach.

Every game, Vinny does at least one thing that makes you think, What the hell is going on here???? Last night, he waited waaaaaaaaaaaaaaay too long to play his energy guys (Reggie Evans and Eric Bledsoe) with the game slipping away (an 18-point deficit) in front of a comatose/semi-horrified crowd. When he finally played the Evans/Bledsoe card and they brought the Clips back (and woke up the fans), Vinny missed multiple chances to sub his best player (Chris Paul, also one of the best players alive) for an ice-cold Mo Williams (1-for-8) midway through the fourth, finally pulling the trigger with just 3:18 remaining in a tie game after Paul had been sitting for a solid half hour. Inexplicable. You would have thought dozens of “PUT CHRIS IN!” cries would shake Vinny out of his stupor, but no. The Clippers couldn’t finish down the stretch, and that was that. Yet another annoying loss for a team that should be running away with the Pacific and somehow is allowing the Lakers to hang around. Aaaargh.

I left the building mildly impressed by the Warriors (for a lottery team, they play their butts off and don’t have any dogs, although Curry’s ankle problems continue to be perplexing), mildly discouraged by the Clippers (who just can’t seem to stay out of their own way some nights) and unequivocally delighted by the doubleheader of hoops (two NBA games in nine hours!). Only in Los Angeles.

The good news for Clippers fans: They get to play an almost-definitely-dead-legged-and-shorthanded Celtics team tonight.

The good news for Celtics fans: Between Vinny and the Clippers’ foul shooting malaise, you’re always in any Clipper game.

The good news for me: Three games in 32 hours! Say what you want about Los Angeles, but in 2012, it’s the professional basketball capital of the world. Until tomorrow.