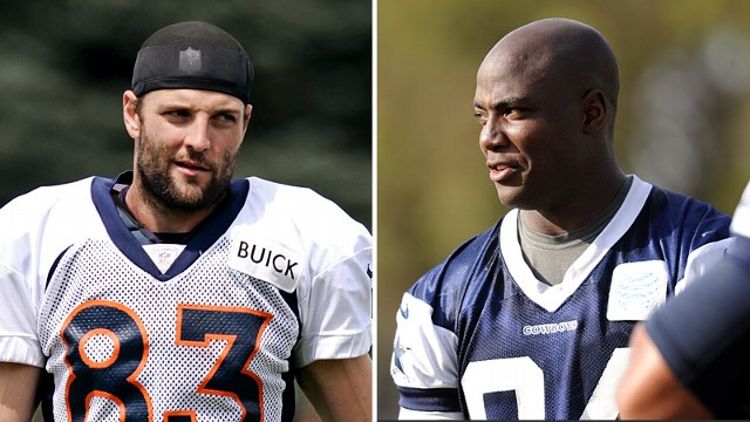 In the past six years, it’s impossible to find two players more productive at their respective positions than DeMarcus Ware and Wes Welker. Since Welker arrived in New England for the Patriots’ historic 2007 season, his 672 catches are 80 more than the man in second place (Brandon Marshall), and Ware’s 91.5 sacks in that same time frame are tops in the league. This year, each is going through the most significant transition he’s seen since that 2007 season (and for Ware, probably his entire career).

New details about Wes Welker’s divorce from Bill Belichick and the Patriots are still coming to light, but we know that for all the personalities involved, the football implications on both sides are significant. For Tom Brady, it means his first season in the past six without his most reliable target, and for Welker, it means getting to play with the other best quarterback of this generation. It’s unlikely that Welker will match the sort of raw totals he regularly put up for the Patriots. He’s 32 years old, the slot receiver doesn’t play as central a role in the Broncos’ offensive happenings, and the rest of his receiving corps is probably the best he has ever played with. But since arriving in New England, Welker has proven to be among the most reliable players in the entire league, at any position, and that’s likely to continue in Denver.

I sat down with Welker last month to talk about the similarities in playing with both Tom Brady and Peyton Manning, his first few months in Denver, and the massive hands on fellow Broncos receiver Demaryius Thomas.

It’s unclear how this happened, but somehow, DeMarcus Ware has come out of the first eight years of his career underrated. There’s a chance it’s because the talk at Valley Ranch is always about Jerry Jones’s insanity or Tony Romo’s golf, but it feels like we haven’t given the best defensive player of the past five years (Darrelle Revis is also in this conversation) his just due. This past season, Ware became the second-fastest player in NFL history to get 100 career sacks (Reggie White; just Reggie White), on his way to his seventh straight double-digit sack season.

Ware did all of that damage as an outside linebacker in the Cowboys’ 3-4 defense, but this year, he’ll have his hand on the ground. This offseason, the Cowboys fired defensive coordinator Rob Ryan and replaced him with Monte Kiffin, of Tampa 2 fame. Initially, there were concerns among some people (read: me) that changing the position of one’s best defensive player wasn’t really in a team’s best interest. There are elements of the switch, though, that point to Ware being as good as he’s ever been. Unburdened by coverage responsibilities and a massive playbook, Ware’s role in the Cowboys’ defense will now be as simple as ever: get after the quarterback. He’s also making the transition with probably the best tutor available. Rod Marinelli, who came to Dallas after a stint as the Bears’ defensive coordinator, has a history of coaching defensive line that includes Warren Sapp, Simeon Rice, Julius Peppers, and Henry Melton. Instead of working with a linebackers coach every day, Ware now has the benefit of learning from one of the best teachers of technique in the game’s history.

DeMarcus came by last month to talk the switch to defensive end, some of Marinelli’s odder coaching tactics, and what it’s like to play for America’s Team.

About Last Night: Quoth the Ravens