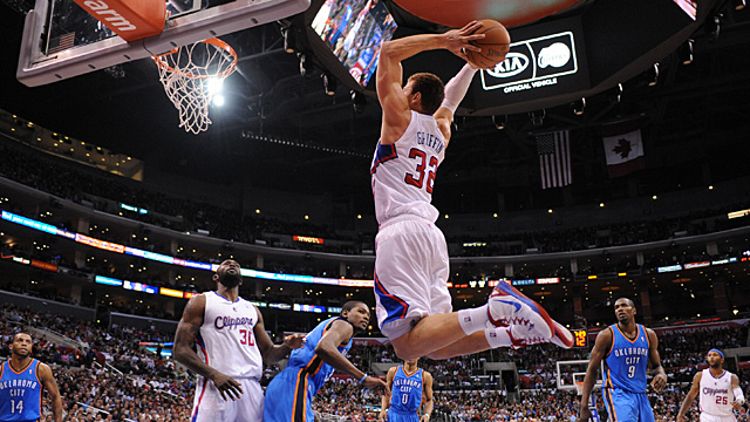 In pop culture, it’s pretty normal to see artists disavow the very thing that made them popular or relevant in the first place. You don’t see it so much in sports. Athletes are usually pretty psyched to be popular and relevant. But if you’ve ever seen Blake Griffin play, especially live, where all his sarcasm, eye-rolling, and exasperation are on full display, then you know his temperament is closer to that of a musician or writer than it is your typical athlete.

So it makes sense that, in the lead-up to what is going to be the most important season of Griffin’s career (regardless of whether they all seem that way), Griffin is concentrating more on aesthetics than anything else.

“We’re moving on and we’re going to find our identity during training camp and that will be our new city,” Griffin told ESPN’s Shelley Smith this week. “No more Lob City … Our offense is going to have a totally different look this year.”

Is this systemic change due to the arrival of new coach Doc Rivers? Sure. Is there going to be an increased emphasis put on defense and half-court offense to help the Clippers control games that, especially late in the season and in the playoffs, slipped through their fingers? Totally. Did this have to come at the expense of Lob City? No way.

This isn’t really about the Clippers. He may be saying “we,” but this is about Blake. I mean, can you imagine DeAndre Jordan’s reaction to this?

Lob City — or at least the style of play that was eventually branded Lob City — helped make Griffin a star, but it also created a (pretty fair, I think) perception that Griffin was a highlight reel, effective for three quarters of playing above the clouds but useless down the stretch. Toward the end of the season, even if he was battling various injuries, Griffin was a peripheral figure at the close of Clippers games.

To grow as a player (and an artist) Griffin wants to shed his skin. He apparently also told Smith that he had been working on his face-up game from 10 to 15 feet from the basket. For as exciting as it is to see Griffin release people’s souls when he dunks on them, it’s equally excruciating to watch him stop time as he dribbles between his legs for eight seconds while facing the hoop, so I wish him luck with that. The only thing that really bothers me, and should bother you, about Blake wanting to go electronic, or acoustic, or whatever this is, is his need to disavow it all:

“People will still wear T-shirts … I can’t really go to people’s houses and take their T-shirts and cut them up. But we [will] have a new identity as a team and that’s going to be what we work out during training camp.”

This is where he sounds like Kurt Cobain. Why would you care whether people wear T-shirts, sing the Tyga song, or enjoy watching Chris Paul perfectly tee you up for a slam? It’s one of the most exciting things in sports! Just go with it! These things have a habit of running their course; there’s no reason to prematurely kill it or make fans feel dumb about rocking a Lob City shirt. You’re playing basketball, not making In Utero.

This could very well be a good sign for the Clippers; it could signal a more coherent system and a new level of seriousness. It certainly suggests that the Clippers are taking Rivers’s arrival seriously. I get all that. I just don’t see why you can’t have a decent defense, a functional half-court offense, and death from above. How fun would that be to watch?