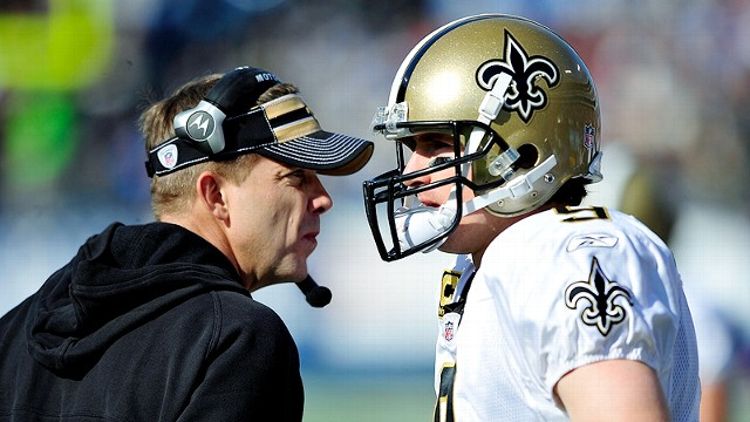 Last year’s New Orleans Saints finished the season third in the league in points scored. By Football Outsiders’ DVOA, they were the ninth-best offense in football. Drew Brees once again threw for more than 5,000 yards and 40 touchdowns. For most teams, it would be a season worth raving about. For the Saints, it was a step back.

The previous season, New Orleans had been second in both points per game and DVOA, and Brees’s 5,476 yards was the highest single-season total in league history. Those 13-3 Saints were just the latest example of a head coach–quarterback combination that belonged in any argument about the league’s best. The Saints’ 7-9 2012 season wasn’t the fault of its offense (it was the fault of a historically bad — as in “most passing yards ever surrendered in a single season” bad — defense), but missing out on one half of that quarterback-coach combo certainly didn’t help matters.

The penalties from the Saints bounty scandal will likely be remembered even by those outside of New Orleans as a debacle, in which Roger Goodell seriously overstepped his bounds and will forever deserve to be disparaged for doing so, but for the people who care about the actual football, all they did was deprive us of an entire season of Drew Brees–Sean Payton magic. Even if we don’t consider that both men arrived in New Orleans in the wake of Hurricane Katrina and were instrumental in reviving a downtrodden franchise that would go on to provide at least some refuge for a devastated city (to be clear, we should consider that), what Brees and Payton have done on the field since 2006 is staggering. Starting in their first season, the Saints’ finishes in offensive DVOA with both Brees and Payton:

In scoring offense, the finishes are even better. Five times New Orleans has landed in the top five, and twice they’ve led the league. There are occasions in the NFL when passing numbers are easy to shrug off, the product of a team struggling to get back into games over and over. For the Saints, the passing game is a never-ending bludgeoning, independent of the score. I mean, Brees’s single-season passing record came in a season that saw New Orleans win 13 games.

Any hope that this season will be a return to offensive form for New Orleans starts with Payton, but it goes further. Near the end of last season, it was revealed that Jimmy Graham, New Orleans’s de facto no. 1 receiver, despite being a tight end, played the entire season with a wrist injury. Graham still had 85 catches for 982 yards and nine touchdowns. The fourth-year tight end told USA Today in a story that ran today that the Saints are “more dynamic offensively than we’ve ever been.” Think about that for a second. I’ll wait.

In a move that sounds worse than it actually is, the Saints will be entering the year without their Pro Bowl left tackle, Jermon Bushrod, who was signed by the Bears to a big contract this offseason. Luckily for New Orleans, and for new starter Charles Brown, much of Bushrod’s success was a credit to how quickly Brees gets rid of the ball. With Payton calling plays, New Orleans has finished in the top five in adjusted sack rate every year. Still, continuity is one of the most important factors in offensive line success. The good news is that the change at left tackle is met with stability on the inside. New Orleans has been a factory of great guard play for much of Payton’s tenure. Carl Nicks was probably the best in the league at the position when he went to Tampa Bay last offseason, but Ben Grubbs played well in his place, and Jahri Evans remains one of the league’s best on the other side. Even with Bushrod gone, offensive line should be a position of strength.

Nothing much changes on the outside for Brees. Marques Colston and Lance Moore will once again be his starting receiver combo, with Darren Sproles acting as a matchup nightmare out of the backfield. One addition that might be worth noting is rookie Kenny Stills, a fifth-round pick who had a knack for making big plays during his time at Oklahoma. What the Saints decide to do at running back is always anyone’s guess. Pierre Thomas typically ends every season near the top of Football Outsiders’ DVOA leaders, but considering New Orleans spent a first-round pick on Mark Ingram two years ago, there’s still plenty of pressure to see if he can finally be an answer. Thomas is likely to be the starting running back when he returns from injury, and it’s probably about time.

We know that, ultimately, the Saints’ season will be decided by what happens on defense, but for those more interested in entertainment than the team’s ultimate level of success (as a Bears fan, I’d just as soon they finished 6-10 while scoring about 12,000 points), Payton and Brees reuniting is worth celebrating.