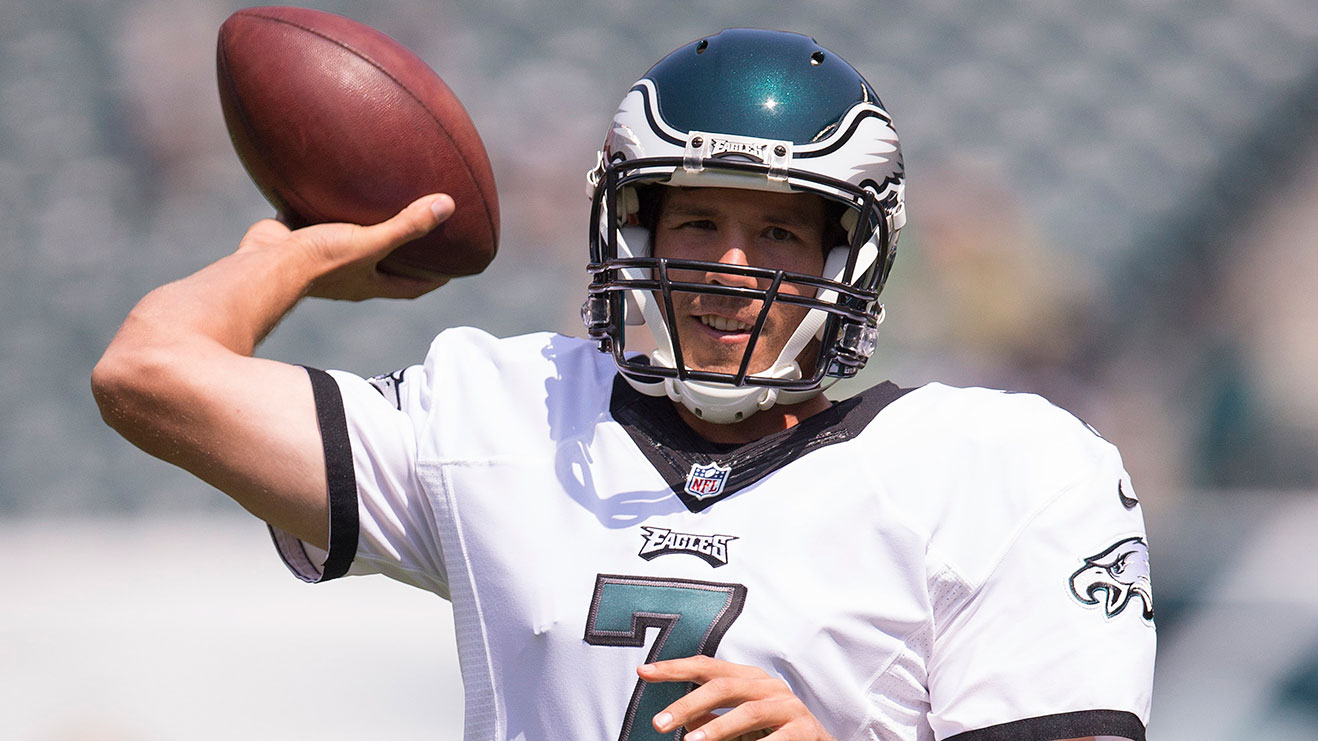 This week, our NFL coverage is focusing on franchises that are a small nudge — in one direction or the other — from taking their rightful place in the NFL hierarchy. While Bill Barnwell is homing in on teams and coaches that have reached a tipping point, I decided to build a list of players facing a step up or a drop down in 2015.

On the Cusp of Stardom 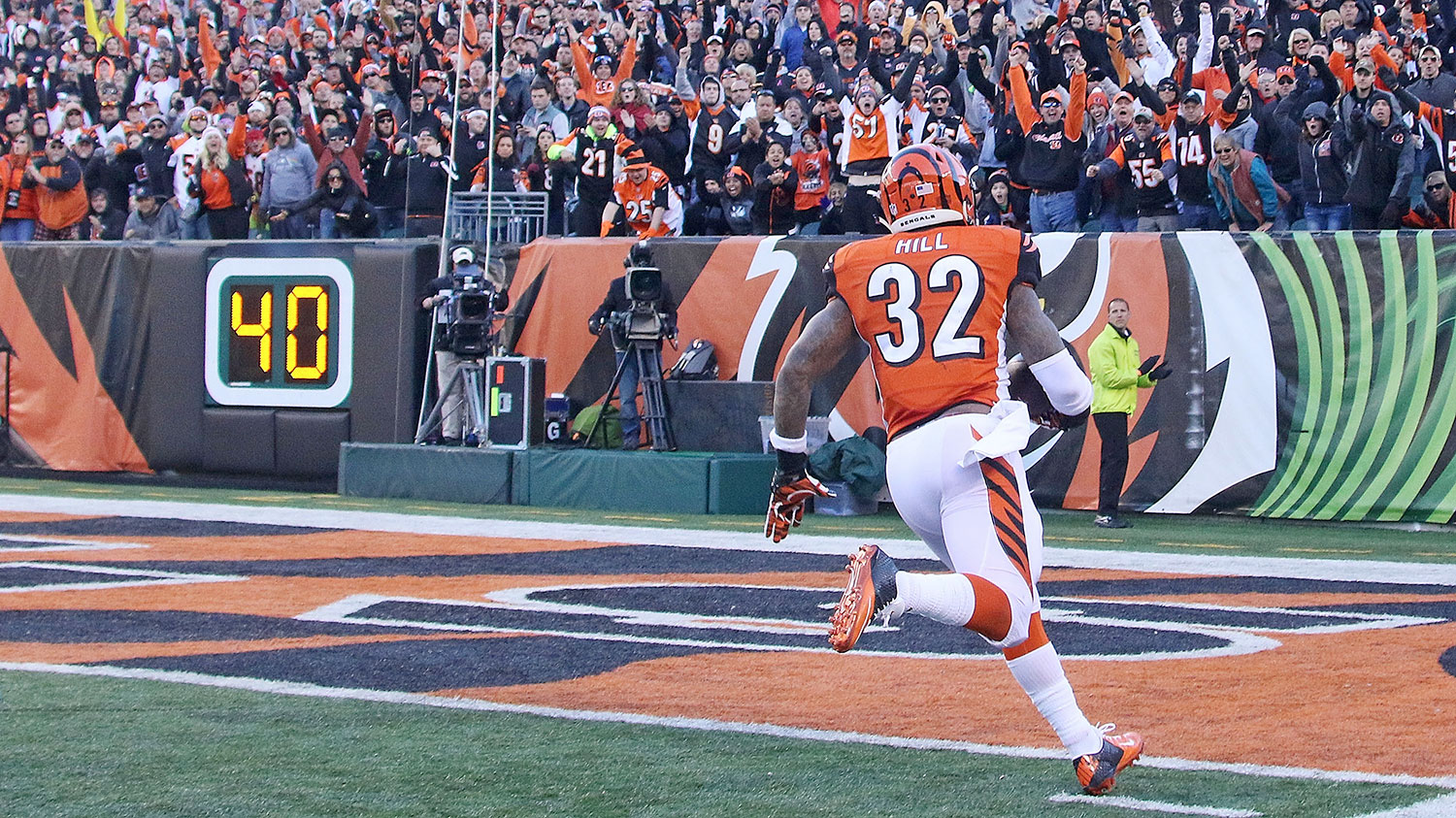 Two years ago, I remember glancing at some of the advanced stats for the Bengals’ running game and being a little confused. Giovani Bernard looked like an exciting young running back, and Cincinnati’s offensive line had as much talent as just about any other group in football. Yet, the 2013 Bengals finished 20th in rushing DVOA. In other words, their running game was somehow less effective than letting Andy Dalton throw the ball.

It's almost here. For everything you need to know about the new season, follow all of Grantland's coverage.
Thankfully, Jeremy Hill is here to right the world. The Bengals finished 10th in rushing DVOA last year on the strength of a monster second half by Hill, who was one of the most efficient per-carry backs in the league. With a bigger workload this year, it would be surprising to see the second-year back crack 5 yards per carry again, but his talents remain perfectly suited for an offensive line that just wants to line up and run over teams.

Cincinnati doesn’t have the luxury of trotting out Tony Romo at quarterback, but it’s easy to imagine the Bengals trying to replicate the 2014 Dallas offense: a high-quality line, a powerful running back, one specimen of a wide receiver, and plenty of manageable third downs. If that formula works, Hill’s per-carry numbers might drop, but he’ll have a very real chance to win the rushing title.

In each of his three seasons, Tannehill’s improved in all the primary areas. Last year, his completion percentage jumped 6 percentage points, and he threw three more touchdowns and five fewer interceptions. On the whole, Tannehill completed 66.4 percent of his passes, posted 27 touchdowns and 12 interceptions, and threw for over 4,000 yards. Despite what look like pretty nice numbers, he still hasn’t been able to throw the ball downfield consistently. Miami finished 30th in QBR on throws that traveled 20 or more yards in the air, and even though the offense was top 10 by DVOA last year, the Dolphins are still missing the ability to gain big chunks of yards.

That’s not all on the quarterback, though. And every non-Suh move Miami made this offseason seemed to be part of an effort to fix that problem. Of players with double-digit targets at least 20 yards downfield, no one had a better catch rate (60 percent) than Kenny Stills, who came over in a trade with the Saints. And in case you haven’t seen much of Miami’s first-round pick, DeVante Parker, just know that he will go and get it.

It’s also tough to make any deep throws when you don’t have the time. In Weeks 1 through 9 — when star left tackle Branden Albert was still in the lineup — Miami faced pressure at the ninth-lowest rate in football. After Albert tore his ACL, the Dolphins dropped to 27th over the final eight weeks. The offensive line continues to be a question mark, but this group should at least be better than last year.

With Albert’s return and a couple of new downfield threats, Tannehill has the skill set and the situation to gain some serious ground on the Elite Quarterback tier.

Vikings fans are really going to hate me and Barnwell by the time the season starts. This team has tons of young, exciting talent, and Barr might be the best of them all. Just two years after moving from offense to defense at UCLA, Barr went through another significant transition as a rookie, moving from the purely pass-rushing role he played in college to linebacker in Mike Zimmer’s defense.

Barr had just four sacks in 12 games last year, but expect that number to jump a bit in his second season as he gets a better handle on his responsibilities. And even if Barr’s sack volume never gets too high, his versatility — he plays both as a pass-rusher and a cover linebacker in a way few guys still do — makes him an invaluable building block for Minnesota. It wasn’t totally clear just how he’d fit in Zimmer’s scheme when the Vikings took him ninth overall in 2014, but right now, it looks like he’s well on his way to being a star.

There aren’t many stars left among the Giants defense, but if you had to pick one, it’d be Hankins. Although they finished 24th in defensive DVOA last year, Perry Fewell’s group was able to generate pressure on a higher percentage of opponent dropbacks than every team other than the Eagles. Underrated edge guys like Damontre Moore and a post-hype Robert Ayers help, but their job’s much easier when there’s a massive pocket destroyer wreaking havoc on the inside. Despite playing plenty of nose tackle in 2014, Hankins had seven sacks.

He isn’t quite built in the way most other effective pass-rushing defensive tackles are, either. Hankins is listed at 320 pounds, which seems generously low, and his ability to both get after quarterbacks and be a force in the run game reminds me of Haloti Ngata. That may seem like high praise, but consider this: Hankins is already among the better interior linemen in football and by season’s end, he’ll still be only 23. On a defense that’s really searching for foundational pieces, he figures to be one for a long time.

On the Brink of Irrelevance 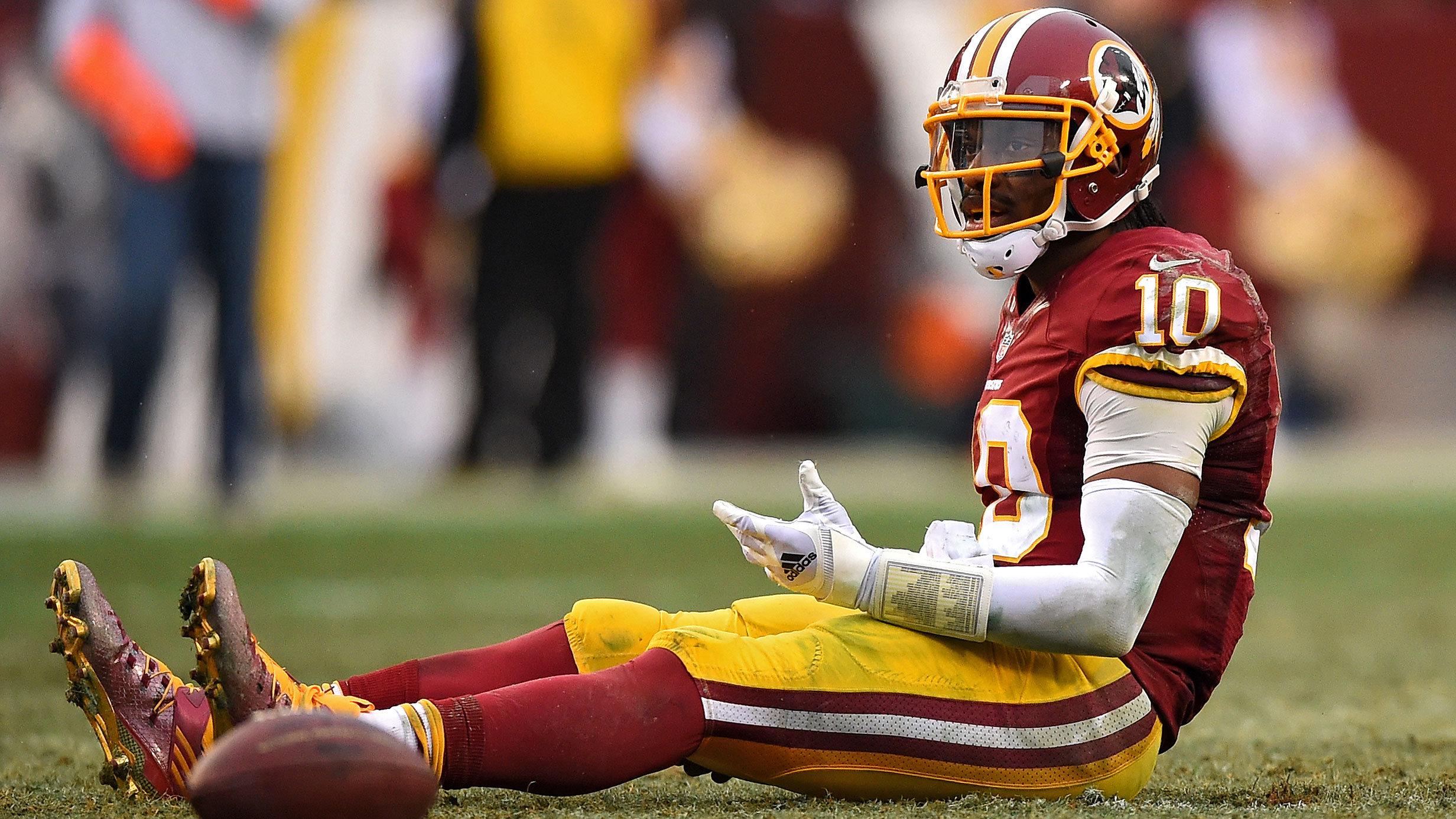 I don’t want to spend too much time on Griffin’s “I feel like I’m the best quarterback” comments, so I’ll just say this: Nah.

If we’re envisioning a season in which Griffin at least returns to the ranks of decent NFL quarterbacks, though, it starts in the same place it did for Kyle Shanahan’s offense in 2012: play-action. Since Griffin came into the league, this is the list of quarterbacks with a better QBR on play-action throws: Peyton Manning, Ben Roethlisberger, Russell Wilson, Matt Ryan, Tony Romo, and Philip Rivers. He’s seventh — behind six star quarterbacks and ahead of Andrew Luck, Aaron Rodgers, Tom Brady, and Drew Brees.

But on throws without play-action? Well, it’s not great. Griffin’s QBR of 45.0 is 26th among 31 qualifying quarterbacks since 2012. The only ones who’ve been worse? Tannehill, Mark Sanchez, Chad Henne, Brandon Weeden, and Josh Freeman.

From the beginning, Griffin’s success was built on the threat of the running game — both with him keeping the ball and Alfred Morris toting it. The scampering quarterback we saw three years ago is probably gone, but for there to be any hope of Griffin inching toward the heights of his rookie year, Washington will need Morris and that offensive line to be better than they were last year. Getting star tackle Trent Williams healthy and bringing in rookie mauler Brandon Scherff at guard should help with that, but if they’re not enough to give Washington the kind of run-friendly environment Griffin will need to succeed, this could really be the end of the quarterback’s time in the nation’s capital.

Even with a massive, Ndamukong Suh–shaped crater at defensive tackle — one that exists despite the newly signed Haloti Ngata being in town — Detroit still elected to let Fairley walk. Before a midseason knee injury, Fairley was playing some of the best football of his career in 2014. The sack numbers weren’t impressive, but with him and Suh shoving guards back into opposing quarterbacks, the Lions built the best defense in football over the first half of the season. Detroit fell off a bit in the second half, and while that had to do with more than just Fairley’s knock, missing its second star tackle certainly didn’t help.

Come the offseason, Fairley’s free-agency value on the open market was one of the more intriguing story lines. Yet, when he signed a one-year deal with St. Louis for $5 million,1 it was a clear indication that most teams were hesitant to give him a long-term deal in the price range he wanted.

At this point, it looks like it’s going to take a full year of Fairley producing at a high level for a team to trust him with a big deal. In St. Louis, he’ll see his share of single-teams with Aaron Donald next to him and Robert Quinn and Chris Long on the outside, but there’s also a chance that the depth across the Rams’ line limits his number of snaps. However much he ends up playing, if Fairley can both look motivated and stay healthy for an entire season, the 27-year-old should get one more significant multiyear contract in 2016.

One of the rare defensive picks from that 2012 draft who hasn’t turned into a star, Kirkpatrick finally started to make his way into the Bengals lineup late last season while Terence Newman struggled with injuries and a dip in play. Cincinnati has enjoyed one of the better pass defenses in football in recent years, and part of that is because of the depth of quality at cornerback. With Adam Jones, Leon Hall, and Newman holding down the starting spots, Kirkpatrick’s struggled to break through, and this year provides what might be his last chance to do so.

Newman is off to join former coordinator Mike Zimmer in Minnesota, but last year’s first-round pick, Darqueze Dennard, is lurking, hoping to avoid the spot on the bench that Kirkpatrick occupied during his first few seasons. If Kirkpatrick can’t get a firm grasp on a starting job this season, it’s unlikely he ever will.

I’d like to hop in a time machine to go back and see Bradford’s reaction when he learned he was traded to Philadelphia. Few players in the entire league needed a change of scenery more than him, but going from the uninventive Brian Schottenheimer to the mad genius of Chip Kelly is like going from a unicycle to a smart car.

That the Eagles figured him worth acquiring is already a good sign for Bradford’s future. You can see Kelly’s thought process here, too: When he starred at Oklahoma, Bradford was the point man for the fastest offense in college football, and that’s what he’ll be operating under Kelly. He’s at his best when he’s making quick throws to the middle of the field, and he’ll have plenty of those chances in this offense. It’s no coincidence that the Eagles’ nominal no. 1 receiver, Jordan Matthews, plays in the slot.

Bradford will also be aided by the kind of effective running game he never had in St. Louis. In his four seasons as a starter, the Rams’ best finish in rushing DVOA was 19th, and in three of those years, they finished in the bottom five. The Eagles finished 13th last season after running away with the top spot in 2013. Even with the departure of Evan Mathis, some better offensive line health, coupled with the arrival of DeMarco Murray and Ryan Mathews, should bring the Eagles back near where they were in 2013.

With the run game and the construction of their receiving corps, this is an offense perfectly suited for Bradford’s talents. He’ll have every chance to succeed with Kelly, and if he doesn’t, I’m not sure there’s a scenario in which he can.