Here’s the Catch: Travis d’Arnaud Looks Great, But Can He Stay on the Field? 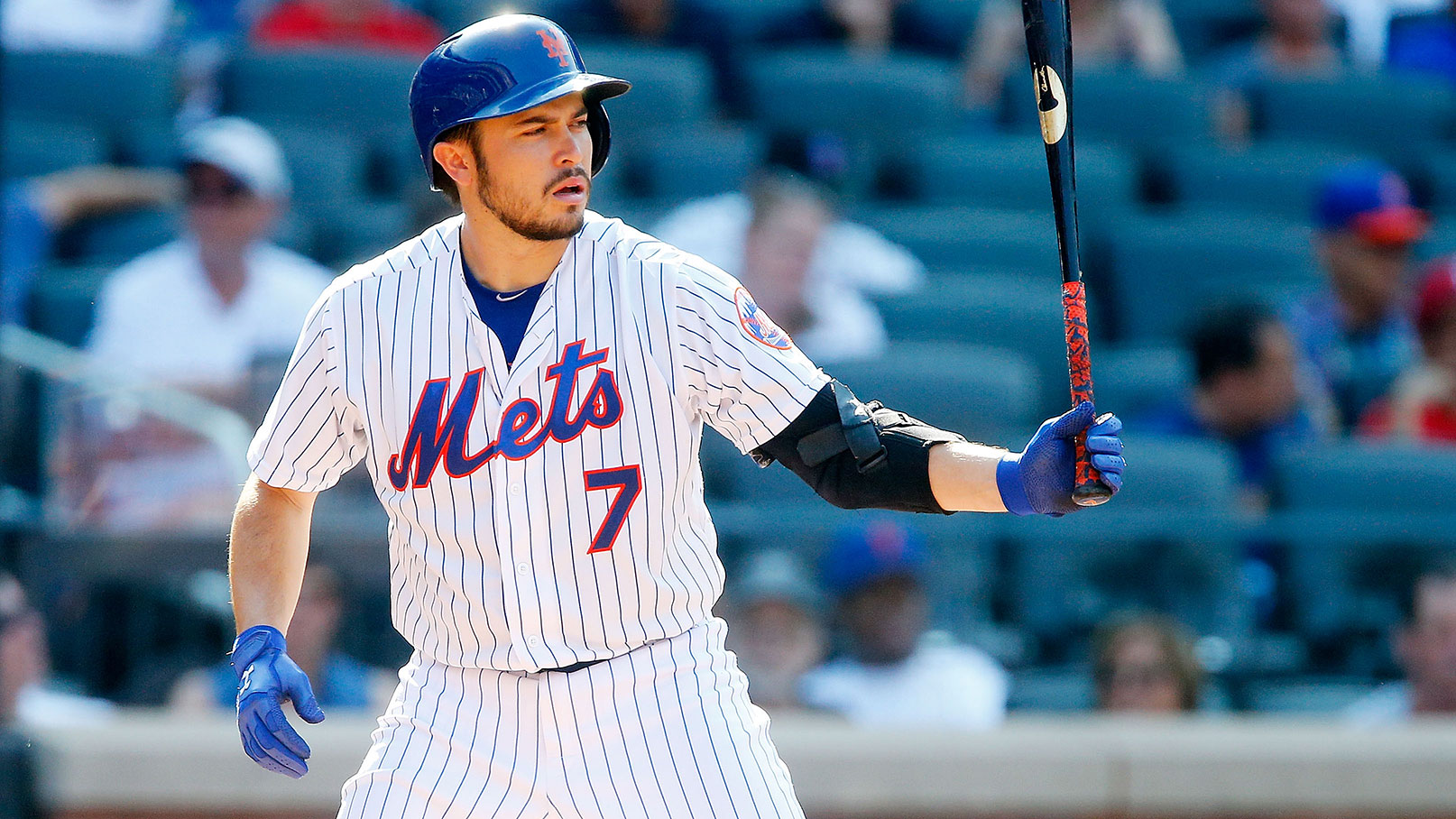 The New York Mets’ fairy-tale season is one of the most engaging stories in baseball this year, but the Yoenis Cespedes–for-MVP campaign is one of the silliest. One of the many reasons to dismiss the hype is that several of Cespedes’s teammates have also been red-hot since he arrived from Detroit. Of those players, few have shone brighter than catcher Travis d’Arnaud.

Ever since the Blue Jays acquired R.A. Dickey from the Mets in December 2012, we’ve heard how Toronto would eventually grow to regret that trade. Despite the team’s run to a likely AL East title three years later, Jays fans can’t be thrilled with what they gave up. The linchpin of the deal remains Noah Syndergaard, the flame-throwing right-hander who’s been dominant for most of his rookie season. But prospect hounds also lauded the acquisition of d’Arnaud.

Unfortunately, there was a catch.

Few baseball labels sting more than being called “injury prone.” It often serves as an unfair characterization of a player who might’ve happened to endure a series of unfortunate but also unrelated setbacks. You could argue that d’Arnaud doesn’t deserve that label, given the radically different circumstances that led to his back, knee, foot, head, hand, and elbow injuries.1 Still, players who suffer a lot of injuries don’t typically lose that stigma until they, well, stop getting hurt. In d’Arnaud’s case, the difference between hurt and healthy is enormous. He’s been hurt a hell of a lot for someone in just his second full big league season. But as d’Arnaud has shown this year, when he plays, he can be really good.

His 2012 season ended after just 67 games, due to a knee injury. That followed a back injury that limited him to 71 games at Single-A Dunedin in 2010. And the injuries didn’t stop there. D’Arnaud made his major league debut on August 17, 2013, a promotion that likely would’ve come earlier, if not for a foul ball that broke his foot while he was behind the plate in Vegas.

Nonetheless, by the start of last season, d’Arnaud had shown enough to leave spring training with the Mets’ starting catcher job. Over the first two months, d’Arnaud batted just .196/.268/.304. Then, on May 13, he suffered a concussion after being hit in the head by a bat. Recovered from the concussion but still struggling in early June, the Mets sent him down to Las Vegas for two and a half weeks. When d’Arnaud returned, he finally started to show off that big potential at the big league level, batting .272/.319/.486 over his final 69 games.

At this point, you know what’s coming: After raking at a .317/.356/.537 clip through his first 11 games this season, d’Arnaud suffered a fractured right hand from getting hit by an A.J. Ramos fastball. The Mets didn’t see him back on a major league diamond for nearly two months. D’Arnaud returned to the lineup on June 10, started eight of the next 11 games, and then hyperextended his left elbow trying to tag A.J. Pierzynski out at the plate on June 20. This latest mishap would cost d’Arnaud nearly six more weeks.

Since returning from the DL on July 31, d’Arnaud has caught fire, batting .291/.372/.559. Yes, all kinds of kooky things can happen over a span of 35 games, but it’s still pretty rare to see a catcher putting up better numbers (in that timeframe) than Jose Bautista, Edwin Encarnacion, Jose Abreu, and Chris Davis have for the season. How does he rank when compared to his positional counterparts? Among catchers with as many plate appearances, d’Arnaud has been the single best offensive catcher in baseball on a park-adjusted basis.

For opponents deciding how to attack the Mets’ slugging catcher, staying away from the fastball wouldn’t be a bad idea. Expand the sample size to include the entire 2015 season, and d’Arnaud nets the following line against heaters: .294/.391/.571. Shrink it to the past six-plus weeks, and we can see that d’Arnaud’s destroyed anything low and everything over the middle of the plate. 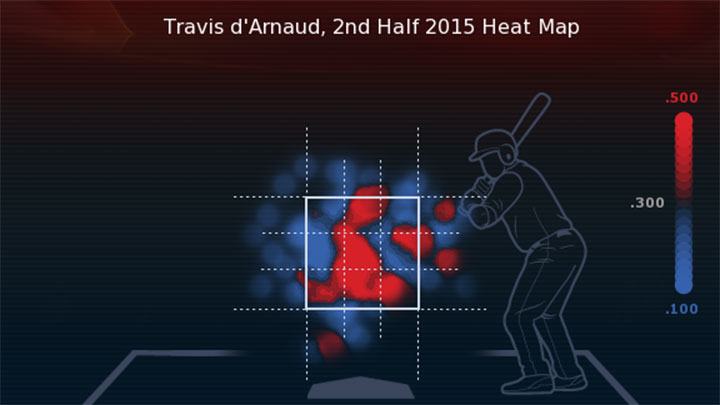 More generally, d’Arnaud’s walking more often than he did for most of his minor league career (8.6 percent of the time) and also striking out less often (16.2 percent of the time). Now that he’s healthy, we’re starting to see the player that the Mets (and Blue Jays and Phillies)2 hoped to see one day: a power hitter with an improving batting eye and pop to all fields.

Improvement has come behind the plate, too. As a rookie last season, d’Arnaud led the National League with 12 passed balls (in 105 games behind the plate); this year he’s allowed just one (in 53 games as a catcher). Last year, opposing base-stealers ran wild on d’Arnaud, swiping 58 bags in 72 attempts — marking a lousy 19 percent caught stealing rate. This year, they’ve stolen 26 times in 38 tries, good for a much improved 32 percent caught stealing rate. Amid that improvement, d’Arnaud has remained one of the better pitch-framers in the game, ranking 13th this year (and 14th last year) in that category per StatCorner.com.

As good as d’Arnaud’s looked since the trade deadline, some skepticism is advised. Of the 43 games the Mets have played since August 1, 27 have been against four atrocious teams with atrocious pitching: the Marlins, Braves, Phillies, and Rockies.3 More troubling is the specter of another injury, given how many times we’ve seen that play before, and how big a drop-off the Mets would suffer if d’Arnaud went down again.4

So, sacrifice some chickens, get the guy a protective bubble, do whatever it takes to keep d’Arnaud healthy. Just 26 years old, he is a budding star who the Mets control through 2019. His combination of tools and results points to a catcher with All-Star upside for the future, but as the Mets vie for their first NL pennant in 15 years, the immediate hope is that he stays on the field deep into October.