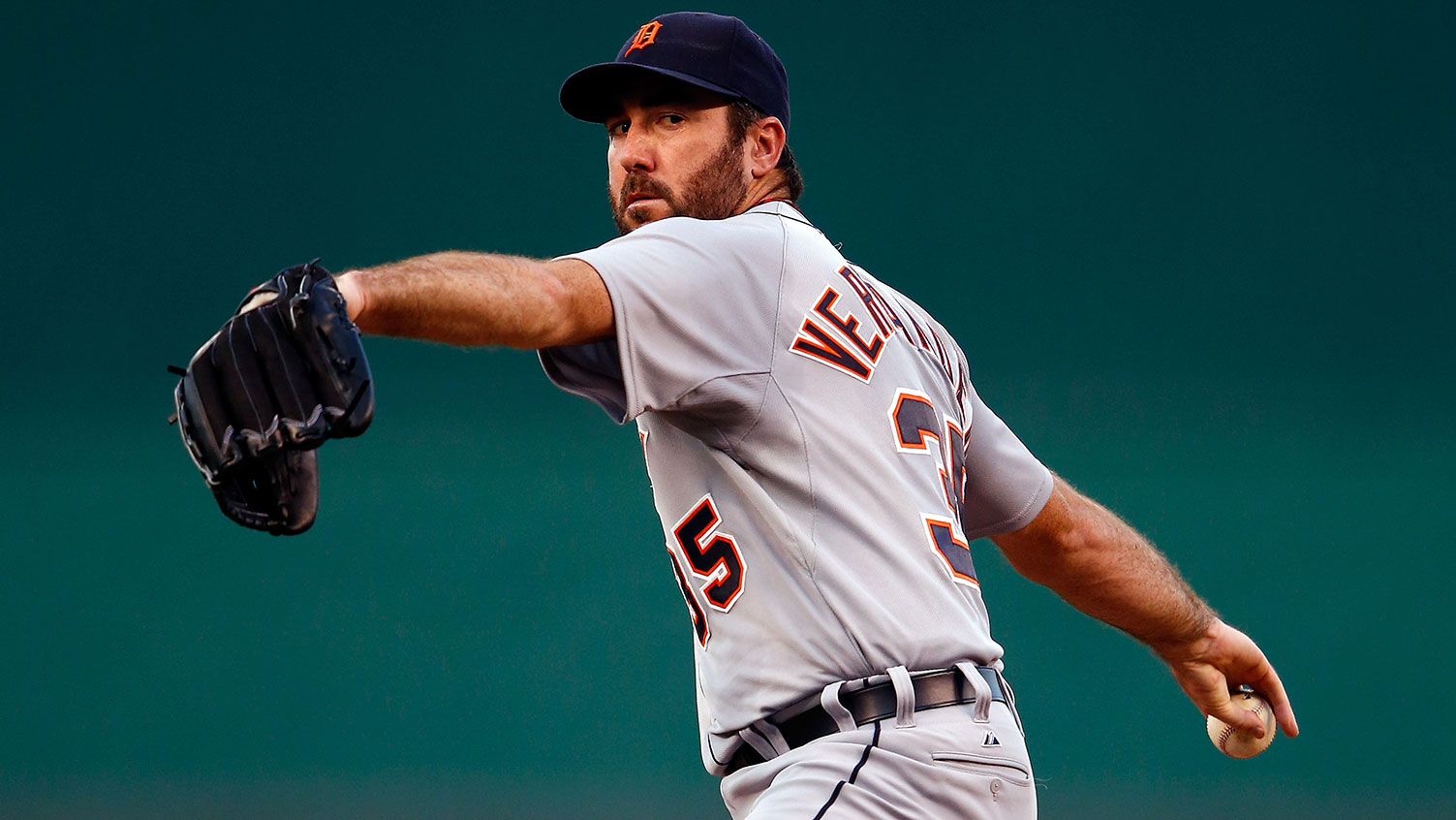 After four years atop the AL Central, the Tigers sit in last place, 21 games back of the first-place Royals. The guy who built the team is gone, and so are David Price and Yoenis Cespedes. All in all, it’s almost a completely lost season in Detroit, but there is one tiny beacon of hope emanating from beneath all the disappointment: Justin Verlander is suddenly pitching like Justin Verlander again.

Six starts into his 2015 campaign, though, Verlander was lost. Once arguably the best pitcher on the planet, Verlander had missed the first 10 weeks of the season with a triceps strain. When he returned, he struggled to find consistency, giving up two earned runs, then six, two, seven, one, and seven again in those first six outings. After a 3.2-inning debacle against the Orioles yielded eight hits (including two homers) to go with those seven runs, Verlander knew he needed to change his plan of attack if he wanted to help the Tigers win.

Which is to say: He needed to develop a plan in the first place. Up to that point in his career, the pitcher who’d won the 2006 Rookie of the Year award, made six All-Star teams, and won both the AL Cy Young and MVP awards in 2011 had been doing something that virtually no other pitcher ever would: ignoring scouting reports.

At the height of his powers, Verlander could get away with going in blind. During that 2011 season, Verlander’s fastball averaged 96 mph. Plus, the big right-hander had a knack for saving some fuel in the tank for late in games, as you’d often see him touch 98 or 99 with his heater into the seventh, eighth, and even the ninth inning. Combine that kind of heat with his impressive secondary stuff — especially his hammer curveball — and you could see why he wouldn’t bother analyzing how his opponents hit. When you’re that good, you don’t adjust to the competition. The competition adjusts to you.

However, by the time he got knocked around by the O’s on July 19, it had become painfully clear that Verlander just wasn’t that guy anymore. The blazing fastball still had some juice on it, but it clocked in at closer to 93 mph. In 2014, he’d posted a 4.54 ERA and 3.74 FIP, his worst results for both stats in six years. Once a strikeout machine who wielded stuff so devastating that hitters could rarely square up his pitches, he’d fanned just 159 batters in 206 innings, with a 17.8 percent K rate that was his worst showing in eight years. The 9.7 hits per nine innings he allowed last season were the most he’d ever allowed in a full season. And in the early going of 2015, he’d looked even worse. Trudging off the field after that debacle against the Orioles, he owned the following numbers: 34 innings, 22 strikeouts, 12 walks, 39 hits and eight home runs allowed, an opponents’ OPS of .860, and a 6.62 ERA.

In other words, he was a total disaster. When you pitch like a guy about to get demoted to rookie ball, and not the world-beating, $28 million-a-year ace the Tigers paid for, it’s time to start changing things up.

Yet, if Verlander met with Tigers pitching coach Jeff Jones to identify his struggles and actually formulate a plan against future opponents, it appears as if they discovered something curious: Despite the decline in velocity, it was time for him to start throwing more fastballs.

Typically, when a power pitcher loses multiple ticks off his fastball, the natural inclination is to throw fewer fastballs. Former fireballers like Pedro Martinez learned how to lean more heavily on off-speed and breaking pitches later in their careers, enabling them to succeed even without lighting up radar guns. But Verlander wasn’t your typical power pitcher. He’d never used his heater as much as you might expect from someone who could approach triple digits on the radar gun — and his fastball usage with two strikes, as this chart shows, was especially sparse.

Verlander had spent the best years of his career blowing heaters by hitters early in counts, then putting them away with lots of nasty two-strike curves and sliders, plus a few changeups for good measure. That pattern remained predictable for years, yet worked to great effect because his stuff was so damn good. But once his velocity dropped, opponents got better at smacking those fastballs for hits. Throw in a loss of bite on his breaking stuff along with the stubborn predictability of his pitches, and after a while, opponents started hitting all of his offerings a lot harder.

So when the time came to make changes, Verlander countered the classic logic of an aging fireballer and started throwing more heaters. These are his fastball numbers for this year:

That improved swing-and-miss rate with his fastball is especially impressive. Only three other ERA title-qualified starters in all of baseball have made batters whiff more often on their fastballs this year, and all three throw harder than Verlander does. That, too, might seem a little curious at first glance. His fastball velocity didn’t budge from his first six wildly erratic starts to his eight most recent outings. Lacking that extra heat, though, Verlander recently started throwing his pitches in drastically different sequences and locating his fastball a little better.

In those ugly first six starts this year, Verlander unleashed his fastball just 42 percent of the time in two-strike counts, continuing the same trend he’d followed for years. Presumably realizing that hitters were waiting for that predictable pattern of early-count heat and late-count junk, he adjusted. In his past eight starts, he’s fired fastballs 53.6 percent of the time in two-strike counts. Once he’d changed that pattern, all that was left was to edge the ball away from the middle of the plate. Throwing his fastball slightly higher than before allowed his 93 mph heaters to look a little faster as they came streaming in, causing more batters to swing through.

Last week against the visiting Angels, we saw Peak Verlander 2.0, as he took a no-hitter into the ninth before ultimately succumbing to a Chris Iannetta double en route to a one-hit shutout. Of his 112 pitches that night, 75 were fastballs, a 67 percent usage rate that was well above what he’d shown earlier this season. And of the 18 at-bats that ended in fastballs, the Angels managed one hit to go with eight strikeouts. Just look at the first three guys in this clip — Kole Calhoun, C.J. Cron, and Iannetta — and you can see the powerful effect that high, two-strike fastballs can have when the hitter doesn’t know they’re coming.

After following up that near-no-no with a two-earned-run outing in Kansas City on Tuesday, Verlander now sports the following line over his past eight starts: 58.2 innings, 53 strikeouts, nine walks, 40 hits and three homers allowed, an opponents’ OPS of .497, and a 1.53 ERA. Even without that mid-to-high-90s velo, he’s suddenly as effective as vintage Verlander again.

Of course, there’s no guarantee this will last. This season’s triceps strain aside, Verlander has been supernaturally healthy over his career. That’s been a blessing for his team, but it has also resulted in nearly 2,200 innings piling onto his odometer between the regular season and playoffs. So you wonder how long he can remain upright and effective, given the injury demons that threaten every pitcher. While Verlander always likes talking about his childhood idol Nolan Ryan, it’s highly unlikely he approaches either the longevity or the never-fading fastball mustard that made Ryan the biggest pitching outlier in modern baseball history.

He doesn’t have to be Nolan Ryan, though, and the Tigers will simply hope they can benefit from a version of Verlander who has tamer stuff but is better prepared to tame the opposition. With four more $28 million years left on Verlander’s deal, along with an aging and thinning roster that showed serious signs of wear this year, getting the wiser and better version of their former MVP isn’t a luxury. It’s a necessity.

The Storm of Plenty: Why Deflategate Has Been the Perfect Sports Media Feeding Frenzy