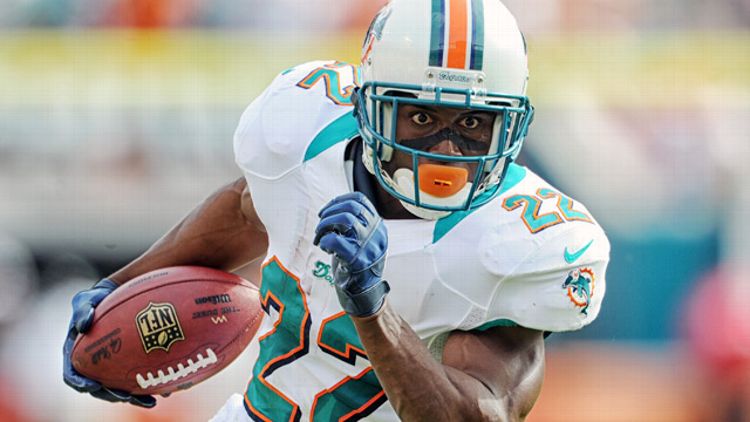 An introduction: Last year, I put together free-agent books from the perspective of a player agent for four different players, starting with Mike Wallace before moving on to Matt Flynn, Mario Williams, and Arian Foster. This year, I’ll be doing the same for three players, starting today with Reggie Bush.

For those who weren’t around last year, these articles are designed to be smaller versions of the “books” that agents like Drew Rosenhaus or Scott Boras might prepare on behalf of their veteran free agents as they’re about to hit the market. Normally, my goal is to present an accurate depiction of the league and its constituency; that’s not the case here. In these articles, my goal is simply to sell the player as best I can to a potential team. I won’t flat-out lie about the player’s strengths or statistics, but if I can distort the numbers to make the player look better, I’m happy to do so. Please keep that in mind when reading these next three pieces. Thanks!

Very simply, the game has changed. The NFL continues to evolve further and further into a league dominated by passing attacks, and there’s no sign of the shift letting up. In 1992, teams threw the ball an even 50 percent of the time. After a gradual climb, 20 years later, teams are throwing the ball on more than 54 percent of their offensive downs:

The numbers even understate how drastically the style and schemes of the league’s offenses are changing. More than ever, it’s important for your offensive players to be versatile. Teams that made huge leaps this past season were driven by quarterbacks and wide receivers who looked like running backs once they got the ball in their hands. Likewise, one need look no further than the World Champion Baltimore Ravens to see the value of a running back who can also catch passes. If you don’t have a superstar quarterback who can throw receivers open or fit the ball through impossible windows on every play, you need to surround the guy you have with playmakers who make his job easier. Reggie Bush is that playmaker. Reggie Bush is a back for today’s NFL.

I hardly need to point out the myriad skills Reggie Bush brings to the table. Since his days at USC, Bush has been renowned as a paragon of versatility and a constant threat to break a big play for his team. During his time as one of the key components of the New Orleans Saints offense, Bush lined up as a traditional running back, slot receiver, and devastating returner, helping to lead the Saints to a Super Bowl victory in 2009. Bush has been a winner and a perennial championship contender at every level of football.

Over the past two years, though, Bush has emerged as an essential part of a Miami Dolphins offense that is otherwise bereft of playmakers. Despite playing with a mediocre set of quarterbacks and without a serious weapon in the passing attack this past year, Bush has quietly become the workhorse of the team and the primary reason Miami has been able to move the ball downfield. You’ve seen what the likes of Brandon Marshall and Wes Welker have done after they got out of Miami and moved into an offense that fit their strengths; Bush is capable of a similar leap when he leaves the Dolphins this offseason.

You’ll note Bush’s touchdown total; in addition to remaining a big-play threat with his eight touchdowns of 15 yards or more over the past two years, Bush has been an effective goal-line back when the Dolphins have chosen to use him in that role. He has scored on three of his five carries from inside the 2-yard line, a 60 percent conversion rate that compares favorably with the league-average rate of 49.7 percent.

Because the Dolphins have been so hard up for offensive weapons, Bush has produced an impressively large percentage of his team’s workload. While Bush was regarded as a situational back during his time with the Saints, he has been the featured back during his run with Miami. During the past two years, Bush has been the ball handler on 35.2 percent of his team’s touches, which compares favorably to a back like Michael Turner (34.5 percent). About a quarter (26.4 percent) of Miami’s offensive yardage has come courtesy of Bush, which places him among the league’s best running backs:

Despite that heavy workload, Bush has been able to withstand the emphasis on giving him the football and remained healthy during his time with the Dolphins. Bush has only missed one game during his two years in Miami; only three of the other nine backs on that list above have suited up more frequently than Bush, who was on the field for 55 percent of Miami’s offensive snaps last year, tying him with Jamaal Charles and Darren McFadden. When you watch Bush play, you see a back who is both capable of picking up the tough yards up the middle and bouncing outside to create a long gain.

In addition, Bush has continued to make strides in protecting the football. After fumbling once every 43 touches as a member of the Saints, Bush fumbled just once every 65 touches during his time with the Dolphins. That’s a fumble rate that compares favorably to the likes of Maurice Jones-Drew, Willis McGahee, and Charles over that same time frame.

That all speaks to Bush’s continued improvement as a runner, but he remains the league’s most devastating running back in the passing game. Since Bush entered the league in 2006, no other halfback has more receptions than his 372. Only Steven Jackson and Darren Sproles have more receiving yards than Bush over that time frame.

Finally, there’s plenty of reason to believe that Bush’s best years are still ahead of him. The other backs on the market — thirtysomethings like Jackson and Turner — have far more wear and tear on their bodies than Bush does. Having just turned 28 and with fewer than 1,000 NFL carries, Bush is almost eerily similar to one recent back who shares both a skill set and a career path with him through the age of 27:

Player A is Tiki Barber. Over the four ensuing seasons, Barber ran for 6,256 yards and scored 34 touchdowns while making the Pro Bowl three times. Like Barber, Bush has gotten more effective and efficient as his role has expanded. While Reggie’s already had an extremely impressive career at the professional level, his best might still be yet to come. That’s rare for a player entering free agency, and it represents a significant value opportunity for whichever franchise acquires his rights.