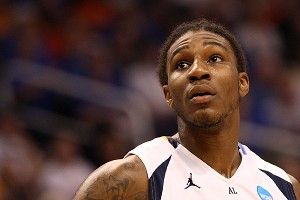 Last year, the Sacramento Kings got lucky with their second-round pick. With the 60th and final pick, they selected Isaiah Thomas. By the end of the season, he was an effective starter for them. Every team hopes they will choose guys who can make an immediate impact. Here are three guys who won’t go early, but could really help their future team.

Strength: Getting to the Rim Off of Ball Screens

Nineteen-year-old Evan Fournier posted over 20 points per game last season in the French pro league. His biggest asset is his ability to get all the way to the rim off of a ball screen. He plays off of screens 50.8 percent of the time, shooting on 54.2 percent of those attacks. This past season, Fournier posted a PPP of 0.903 on 43.9 percent shooting, placing him in the top 25 percent of all international players (tracked by Synergy Sports). The reason for his high efficiency is that Fournier gets to the rim at a very high rate.

Fournier has pretty good length, which is what allows him to finish over help defenders attempting to block his shots. If he sees a lane, he tries to get to the front of the rim, but if necessary, he’ll throw a hesitation move at the defense.

He has one year left on his contract with his French team, the Poitiers, though it has been reported that a buyout is possible.

Fournier doesn’t really stay focused all the time, especially on the defensive end. He has a tendency to lose track of his man, because he overhelps or because he ball-watches, which prevents him from closing out hard. According to Synergy Sports, in spot-up situations, Fournier allows opponents to shoot 43.6 percent while posting a PPP of 1.138, putting him in the bottom 20 percent among international players.

Both Harden and Fournier come off of ball screens looking to get to the rim. Harden has more moves right now — though Fournier has a nice hesitation move — but their mentality is very similar.

Andrew Nicholson proved to be one of the better college post players at St. Bonaventure last season because he knows how to use his size. He posted a PPP of 0.990, placing him among the top 19 percent of all college players, while shooting 57.4 percent. When watching Nicholson work down low, you rarely see his shot blocked or even bothered.

Taking advantage of his long arms, Nicholson’s pet move on the block is a jump-hook going toward the middle, which he can make with either hand. He also has good range around the basket. Even if he gets pushed out far from the basket, he can turn to hit a jump shot.

On the defensive end, Nicholson plays like a skinny and long player. He bites on too many pump fakes and struggles keeping his hands straight up when contesting shots. He allows 40.7 percent shooting and a PPP of 0.770, placing him in the 56th percentile in terms of post defense. He commits fouls 10.1 percent of the time when he gets posted up.

Nicholson allows his man get into his body way too easily, which negates his athletic skill. It’s harder to contest shots with your hands up when a guy is jumping right into your chest. He needs to do a better job of pushing guys away from the basket. If he can do those things, his foul rate will go down and he will be more effective on the defensive end.

Al Jefferson is one of the last true post guys, using fantastic footwork and his length to get off clean looks. Andrew Nicholson can play that same role.

Strength: Playing Off of Cuts

Jae Crowder is an undersize power forward, which is why he is projected by DraftExpress to go in the middle of the second round. I think he can be a solid energy guy off the bench. He’s skilled enough to play the three spot, but I think he could have his biggest impact as a four. He’s strong enough to defend and resist getting posted up. He is also good finisher, spacing out and cutting off of the basketball. This past season at Marquette, Crowder posted a PPP of 1.374 on possessions labeled as cuts by Synergy Sports, placing him in the top 14 percent of all college players on 70.7 percent shooting.

The key to Crowder’s “cut” game is his spacing — getting in the right spot and making himself available for his teammates’ passes. When he makes the catch, he strongly attacks the rim. That strength is the key, because it allows him to finish through (rather than over) larger defenders, taking the contact and still getting a shot up at the rim.

If Crowder wants to play the four, he’s going to have to be much better in pick-and-roll situations. With his big body, Crowder is a very good screener, but the fact that he isn’t a threat on the roll hurts his effectiveness. In situations where Crowder was the roll man (it wasn’t often: only 2.8 percent of his possessions), Crowder shot just 20 percent and posted a PPP of 0.533, placing him in the bottom 6 percent. The problem is that when Crowder rolls, he doesn’t go up strong as he does on cuts. He actually hesitates, and that hurts him.

He pops out way too much, doing so 93.3 percent of the time. Now, Crowder is a very good spot-up shooter (shooting 43.4 percent), but that’s with his feet set. In pick-and-pop situations, he isn’t going to have the same kind of success.

Crowder has a similar game as Haslem, though he is a bit more skilled. That lack of size really hurts Crowder, though.