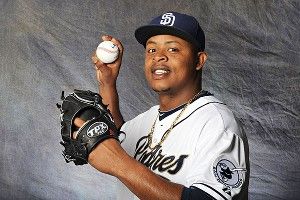 In 2011, no team underperformed its expected record by a wider margin than San Diego. The Padres scored just 18 runs fewer than they allowed, netting an expected record of 79-83; they went 71-91 instead. With a young nucleus led by Mat Latos, Cameron Maybin, and Cory Luebke set to return and a sense that they might’ve underachieved last year, the Padres had a deep sleeper feel to them.

Much has changed since then. The Pads pulled off a blockbuster trade with Cincinnati, acquiring Yonder Alonso, Edinson Volquez, top catching prospect Yasmani Grandal, and minor league pitcher Brad Boxberger for Latos. Despite appearances, this wasn’t some huge teardown, not when the Padres turned around and flipped two prospects for slugger Carlos Quentin’s last year before free agency. A knee injury will sideline the notoriously fragile Quentin for the first few weeks of the season, and Latos’s departure could mean significant innings for someone like journeyman Dustin Moseley. But there’s still enough here — Maybin growing into a potential franchise player, Alonso playing his first full season in the big leagues, one-time überprospect Chase Headley seeking a breakout at age 28 — to make the Padres watchable. Even if another sub-.500 finish might be in the cards.

Quentin’s injury, for now, leaves a sizable hole in the middle of the lineup. Guzman’s superficial numbers looked good last year, as he hit .312 in 76 games as a rookie. But he was also a 27-year-old rookie, benefiting from a gaudy .360 batting average on balls in play, with decent but not great power in his profile. The cleanup spot aside, you won’t see many (any?) raw statistical lines that jump out at you, due to Petco Park’s extreme pro-pitching environment. Makes you wonder what talented, young players like Maybin, Alonso, Nick Hundley, and even the underrated Will Venable might do somewhere else.

This is a team that suits its environment, though: The Padres finished seventh last year in UZR and third in 2010. Maybin and Venable in particular are huge space eaters, a necessity given Petco’s massive outfield.

Is Cory Luebke a top-20 National League starting pitcher? Or is he a product of his environment? He finished eighth in the league last year in FIP at 2.93. FIP isn’t park-adjusted, so you’d raise an eyebrow at that number … until you see that Luebke struck out 9.9 batters per 9 innings over 17 starts and 29 relief appearances last year, the fourth-best K rate in the majors for a pitcher with Luebke’s innings total. He’s a flyball pitcher, which makes you think that Petco saved a bunch of balls from flying out of the park … except he was better on the road than at home.

As much as Petco can improve pitchers’ results, road teams reap the same benefits. It might sound obvious, but the Padres need pitchers with elite skills every bit as much as they need true mashers in the lineup. Tim Stauffer is an effective groundball pitcher, Volquez was terrific in his first season with the Reds (granted, four years ago) before his control completely disappeared, and the Padres do have a few intriguing arms on the farm. But Luebke represents their best hope at a true ace. No pressure for a guy starting his first season as a full-time starter.

BREAKOUT PICK
Headley. Mostly a hunch, but Headley was a great all-around player coming up as a prospect, blessed with power, a good batting eye, and athleticism. Even Petco can’t fully explain a microscopic 4.3 percent homerun-to-flyball rate, by far the lowest of his career in any full season. He’s shown flashes of big on-base ability, terrific defense, and above-average pop at various points of his career. If he can put all of that together, there’s a six-win player in here waiting to happen.

IF EVERYTHING BREAKS RIGHT
The Padres bullpen, fortified by the additions of Huston Street and Andrew Cashner (the return for Anthony Rizzo in another offseason deal), helps the team overachieve, the team’s young, core players continue to improve, Luebke establishes himself as an elite starter, and the Padres inch toward 85 wins. In this division, that’s enough to at least make things interesting.

IF EVERYTHING GOES WRONG
Lots of losses this year, but even then, there’s hope for the future. An already strong farm system got a big lift from the Latos trade, propelling the Padres to no. 3 in Baseball America’s Organizational Rankings. Whatever happens this year, the true test will come over the next few seasons, as the Pads try to go from wielding a bunch of young, talented players to building an actual, winning team.

Delonte West Has a Workaround for That Finger Injury