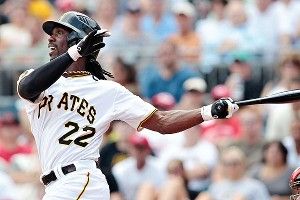 Pirates fans might not want to hear about rebuilding anymore, not after two decades of losing seasons. But the Pirates scored another bumper crop of talent in the 2011 amateur draft, and few if any teams now boast a deeper stable of high-impact pitching prospects. The Bucs are a still a long shot to contend this year. But you’ll see good baseball again in Pittsburgh in the not-too-distant future. And once the Pirates graduate all that young talent to the majors, they’ll have a chance to stay good for a while. Patience.

The next time you find yourself complaining about the slow pace of games, save some love for the Pirates, who’ve done their part to end games quicker by signing Barmes and Barajas in the offseason, thereby ensuring three automatic outs at the bottom of the order. At least the rest of the lineup holds some promise. Presley enjoyed a nice little breakout season last year, if 52 games and a batting line enhanced by a .349 batting average on balls in play can be called a breakout. Tabata continued to show enough speed and on-base ability to be a half-decent leadoff option, even as his power potential remained dormant as he passed his 23rd birthday. McCutchen’s developing into one of the best young players in baseball, and might have another gear or two left in his climb.

The difference-maker here, though, could be Alvarez. The no. 2 overall pick four years ago broke in with a strong rookie campaign in 2010, strafing right-handed pitching and posting an Isolated Slugging (slugging percentage minus batting average, a more complete gauge of power output than just home runs) over .200. But he fell apart last season, succumbing to injuries and a general case of the sucks. A week past his 25th birthday, Alvarez still has ample time to reclaim his power stroke and become the middle-of-the-order beast the Pirates hoped to get. If his cruddy defense eventually pushes him to first, the Bucs will live with it, so long as he’s also blasting 30-plus bombs a year.

Sadly, the notion that there’s one word in Mandarin that means both “crisis” and “opportunity” is a myth. In English, however, there is one term that covers both: Pirates rotation. For a team trying to keep payroll in check while still tossing out some intriguing arms, the Pirates have done a nice job assembling this starting five. Bedard is the consummate wild card, a very good pitcher who can still strike out a batter an inning in a good season, but also a lock to miss a bunch of starts. The question every year is how many. He made 24 of them last year, enough to rack up 2.4 Wins Above Replacement for his two employers; the Bucs landing him on a one-year, $4.5 million deal makes all kinds of sense. Beyond Bedard Injury Watch, you’ve got Morton, the de facto staff ace who might miss a month or more owing to offseason hip surgery; McDonald, the talented but erratic right-hander who can’t even manage six innings per start; Correia, the token veteran filler who’s there to eat whatever innings he can before opponents start whacking his subpar stuff around; and Karstens, the ex-Yankee who pitched a hell of a lot better (and luckier) than anyone expected last season.

That is, unless the Pirates get A.J. Burnett. Who would … wait for it … likely give the team a nice boost. Look past Burnett’s losing record and five-plus ERA over the past two years and consider this: He’s been pitching in one of the worst possible environments for any right-handed pitcher, much less one who struggles with command and leaves balls up in the zone where they can be mashed. A move to the kinder, gentler NL Central, and away from the pitcher’s horror show that is Yankee Stadium’s short porch, would help. Burnett still throws in the low-to-mid 90s and still snaps off one of baseball’s prettiest curveballs when he’s on. If this deal costs next to nothing as expected, the Pirates get a badly needed jolt of depth for their rotation, with a hint of actual upside. In a perfect world, the Pirates get Good A.J., Bedard finally strings together 200 (great) innings, Morton comes back quicker than expected, and McDonald finally has his long-awaited breakout.

More realistically, it’s another trial run to see what they have, while the Bucs wait for top prospects Gerrit Cole, Jameson Taillon, & Co. to advance through the system. Burnett aside, Edwin Jackson would’ve offered a nice bridge from present to future, but he took a one-year deal to play for the Nats rather than the three years, $30 million the Pirates offered him. Now, as ever, premium homegrown pitching talent is the commodity every team would kill to have; for a team like the Pirates that can’t even give its money away (at least not yet), it’s even more vital.

BREAKOUT PICK
McCutchen. Seems strange to predict a breakout for a player who was worth nearly six wins last season. But in his three big league seasons, McCutchen has now posted impressive power (23 homers, .198 ISO last year), a solid contact rate (84.6 percent), and big walk totals (89) … just not all in the same season. He’s still just 25, and you can feel a consolidation season coming, where all of McCutchen’s offensive skills come together and he challenges for league MVP honors, his team’s record be damned.

IF EVERYTHING BREAKS RIGHT
Alvarez and McDonald join McCutchen in posting breakout seasons, the bullpen gets big results from pitchers not named Joel Hanrahan, Bedard stays healthy, Burnett’s revitalized, and Neal Huntington pushes his chips in at the deadline following a surprising first three months. We’re less than a week away from pitchers and catchers reporting, and no one yet knows whether or not we’ll have two wild cards per league. If we do, and all of this clicks for the Bucs, we could see a pennant atmosphere by the three rivers for the first time since Kevin Young’s heyday.

IF EVERYTHING GOES WRONG
Morton and Bedard can’t manage 200 innings between them, Burnett pitches like the guy he’s made out to be by every WFAN caller, Alvarez turns in a second straight bust of a season, Barmes and Barajas make outs so frequently that the commissioner rules they be exiled to Altoona In The Best Interests Of The Game, and McCutchen demands a trade, eventually landing in the Bronx in exchange for Bubba Crosby and the 56,182 bottles of sunscreen confiscated by overzealous ushers since new Yankee Stadium opened. Great for the fight against skin cancer, not so good for long-suffering Buc believers.

The Philadelphia 76ers and the NBA's Middle-Class Dream