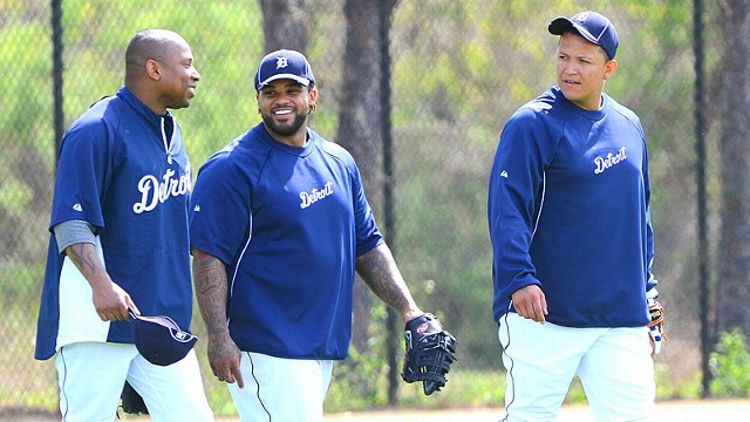 Victor Martinez out for the year with a knee injury? No problem when you have an owner who desperately wants to win a World Series and will spend whatever it takes to try and make it happen. The Tigers dropped $214 million on Prince Fielder, more than making up for Martinez’s lost bat and reestablishing the Tigers as heavy favorites to win the division. But Jim Leyland’s plan to shift Miguel Cabrera to third base could make for some ugly baseball along the way. It’s hard to tell if the Tigers are prepping for 2013 with Martinez back at DH; if they’re trying to prop up Martinez’s trade value by pretending they don’t have two other DHs in the lineup; or if they’re just being delusional about a player nine years older and 30 pounds heavier (even after some major offseason weight loss) than he was when he broke into the majors. The Tigers could field the worst defensive infield baseball has seen in years … and still roll into October.

Only three teams scored more runs last season than the Tigers, and this year’s offense figures to be even better with Fielder on board. Detroit could benefit from some subtler factors too. A thumb injury cost Brennan Boesch more than one-quarter of last season, and Ryan Raburn could provide 600 plate appearances of above-average offense at second. Even with potential pullback seasons for Alex Avila and Jhonny Peralta, this is the best offense in the division by a wide margin.

Porcello is going to cry himself to sleep this season. A lot. Only two AL Central starters, Justin Masterson and (the former) Fausto Carmona, induced groundballs more frequently than Porcello (51.4 percent GB rate) last year. If Cabrera sticks at third all year, he, Peralta, Raburn, and Fielder are going to befoul everything Tom Emanski ever stood for. Brandon Inge might’ve hit a buck-ninety-seven last season, and he’s not happy about being demoted. But he should get into as many games as possible as a defensive replacement, if only to make Detroit’s infield slightly less awful.

Defense aside, the rotation has some upside. Doug Fister (57-to-5 strikeout-to-walk rate in 70 1/3 innings with the Tigers last year) will be around for six months instead of two. Jacob Turner can’t yet drink legally, but he’d be hard-pressed to do worse than 2011 Brad Penny (5.02 FIP). In the bullpen, Al Alburquerque and his slider of death are out indefinitely, though an offseason Octavio Dotel signing should help for shutdown situations against righties. If Turner needs more seasoning or the pen needs reinforcements, the team that just spent $214 million won’t hesitate to add an arm.

BREAKOUT PICK
On a team full of mostly established talent, Boesch might be as close as the Tigers will get to a breakout player. Entering his age-27 season and given a full year of health, Boesch could tap into the power that fueled his 28-homer season at Double-A three years ago.

IF EVERYTHING BREAKS RIGHT
The American League could be a bloodbath this year with the Yankees, Rangers, and Rays loaded again, the Angels making major upgrades, and the Red Sox sporting enough talent to fulfill much of the promise they had last year. But with Verlander, Scherzer, and Fister atop the rotation and a loaded offense potentially getting even better, the Tigers have the talent to win the pennant. In a weak AL Central, they also have the easiest path to make the playoffs and give themselves a shot.

IF EVERYTHING GOES WRONG
A hell of a lot would have to go wrong for the Tigers to miss the postseason. But Detroit’s infield defense could be historically bad, Jose Valverde won’t go 49-for-49 in saves again if he pitches for 400 more years, Delmon Young’s more likely to be his usual out-machine self than the guy who destroyed postseason pitching and … even after all that, they’re probably still getting in, unless the Indians or Royals go nuts.