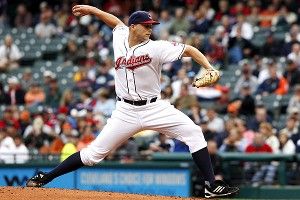 Every year around this time, Las Vegas casinos start posting over/under win totals for MLB teams. The LVH released its lines on Monday. The number on the Indians? 78.5 wins. Bet the over. Bet it hard.

The Indians have a lot going for them this season, starting with three starters at the top of the rotation who are going to burn a lot of worms. Even with the former Fausto Carmona a question mark heading into the season after being busted for identity theft and delayed reentry into the U.S., Ubaldo Jimenez, Justin Masterson, and Derek Lowe should keep Indians infielders busy all year long, and keep the ball in the park. After missing half of last year with thumb and oblique injuries, Shin-Soo Choo should be healthy for Opening Day, just one year removed from a huge .388 wOBA season. Lonnie Chisenhall and Jason Kipnis get starting jobs from day one as they continue their improvement, with defensive whiz Jack Hannahan around to spot for Chisenhall and suck up some of those copious groundballs. Even assuming some regression toward the mean for Asdrubal Cabrera (career-high 25 homers last season) and Casey Kotchman (career-high .306 batting average thanks to a .335 batting average on balls in play), this is still a balanced lineup with upside. Throw in a deep and capable bullpen and you’ve got a good team with the potential to be very good. That might not be enough against an already strong Tigers team that added Prince Fielder. But it’s another step in the right direction for an Indians team that’s on the right track.

The Indians finished 16th in runs scored in 2011. They could do a lot better this year. Choo’s injuries not only cost him 77 games; they also wrecked his performance when he was in the lineup. Chisenhall struggled in his rookie season, posting a .284 on-base percentage; he’s got the skills to do a lot better. And then there’s poor Grady Sizemore. He’s missed 276 games over the past three seasons. He was also one of the 10 best players in baseball before knee injuries steamrolled his career. He’s reportedly recovering well after October knee surgery and is expected to be healthy for spring training. The days of 30 steals and Gold Glove defense are never coming back. But if Sizemore can simply stay in the lineup, he’s a power threat (.198 isolated slugging last year) who could give the lineup a lift.

Jimenez’s ERA jumped nearly two runs last season. This despite virtually identical strikeout and walk rates in 2010 and 2011. So what happened? The velocity on his fastball dropped by two-and-a-half clicks, for one thing. That led to the lowest swinging strike percentage of Jimenez’s career, a below-average 7.5 percent. Jimenez’s batting average on balls in play and home run-to-flyball rate, two metrics that fluctuate based on both luck and how hard a pitcher gets hit, both spiked to career-high or near-career-high levels. If Jimenez doesn’t rediscover his lost 96 mph fastball, we probably won’t see his lights-out 2010 season again. But he can still be an effective innings eater, someone who induces groundballs and delivers above-average results. It’s Masterson, not Jimenez, who’s the best bet to be the ace of the staff in 2012 and beyond. But there’s still enough here with those two, Lowe, reasonably effective soft-tosser Josh Tomlin, and multiple fifth starter candidates for the Indians to compete.

The bullpen could be very good, if managed correctly. Vinnie Pestano emerged as an annihilator of right-handed hitters last year, holding them to a microscopic .115 average. Joe Smith and Rafael Perez formed an excellent righty-lefty duo of groundball specialists. Hard-throwing lefty Nick Hagadone could bolster the pen in his first full season in the majors. Oddly, closer Chris Perez might be the team’s fifth-best option in high-leverage situations. It’ll be interesting to see how manager Manny Acta handles the pen, especially if Perez delivers another pedestrian season. It could make good sense to keep him at closer if most of his opportunities are those cushy up-two or up-three, bases-empty, ninth-inning spots. That would leave the tougher outs for the best arms.

BREAKOUT PICK
Carlos Santana. He emerged as one of the best power-hitting catchers in the game last season, cranking 27 homers. But there’s more upside here. If Santana can replicate his 2009 and 2010 form, when he walked more than he struck out at Double-A and again in his 46-game major league debut, we could see an offensive explosion. Santana has MVP-caliber talent. In this, his age-26 season, we could see a monster year.

IF EVERYTHING BREAKS RIGHT
The Indians make the Tigers sweat. Detroit will be tough to beat after the addition of Fielder to a very good roster. But the rest of the division could feature three sub-.500 teams (the Royals are headed in the right direction, but their starting pitching is still iffy), giving the Tribe a chance to rack up a strong intradivision record. If that’s not enough to win the Central, it could be enough to contend for a wild card. Especially if each league adds a second wild card team this year (it’s February 23 — we still don’t know).

IF EVERYTHING GOES WRONG
Sizemore and Choo don’t bounce back, Chisenhall continues to scuffle, and the rest of the American League proves too tough to overcome. Even in that scenario, though, this still looks like a .500-or-better team.