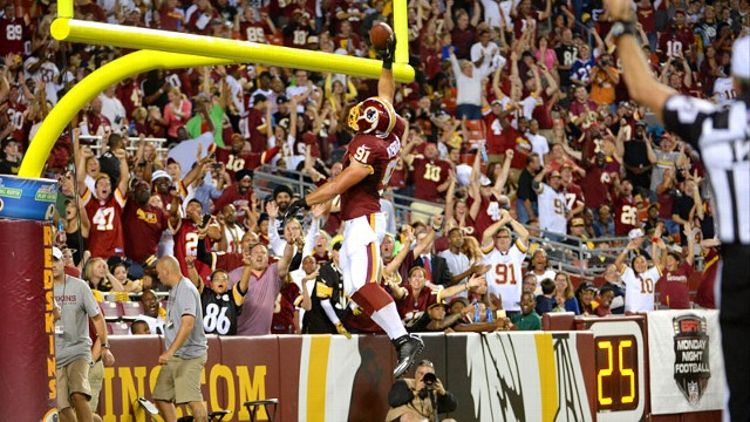 LB @LFletcher59 on @RyanKerrigan91: "It's almost like Bill Russell with his ability to block shots and keep it inbounds." #HTTR

That’s London Fletcher, following the Redskins’ preseason win over the Steelers last night. This quote is good for about 50 reasons, but we’re going to stick to two. The first is the reminder that London Fletcher started his NFL career around when Bill Russell started playing basketball. This is Fletcher’s 16th season. He has played in 240 straight games.

The second is the play Fletcher’s referring to. In last night’s first quarter, Kerrigan tipped a Ben Roethlisberger pass to himself and returned it for a touchdown and the game’s first score. And if you’re going to impersonate Bill Russell, there’s no more fitting end than taking it coast-to-coast for the dunk.

The play might not really count — it being the preseason and all — but it’s still worth noting that Kerrigan is making a habit of this, with similar returns in each of his first two seasons. But even though the touchdown (and the resulting photo above) is probably reason enough to get excited, the best part about last night’s play might be the reminder that Kerrigan is in line for a fantastic year. Someone who’s already been to the Pro Bowl probably can’t be considered a candidate to “break out,” but Kerrigan’s excellent 2012 came without Brian Orakpo bothering blockers on the other side of the Redskins’ defense. With Orakpo back this year (nagging hamstring injury aside), Kerrigan should only improve on the already great pass rush he put up a year ago. There may not be any more dunking this year, but there should be plenty of sacking in Washington.