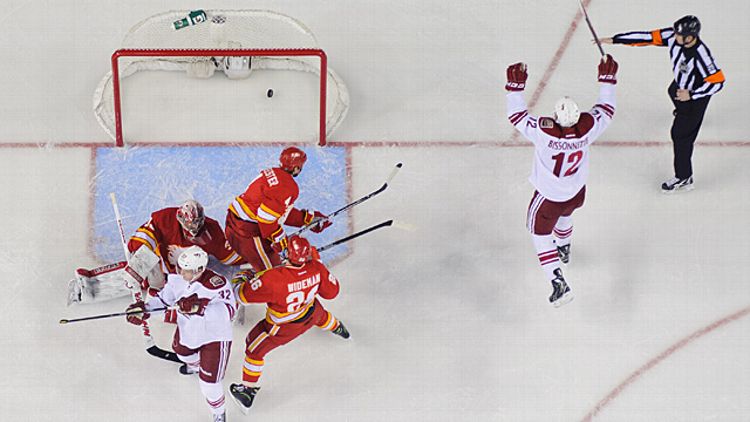 As the NHL season approaches the halfway mark, a few trends have emerged. And one of them is discouraging: Despite some hope for another post-lockout bump in scoring, the goals per game rate so far this year is virtually unchanged from last season. And the rate of even-strength scoring is on pace to be among the lowest since before the 2005 lockout.

That’s disappointing for fans of offensive-minded hockey, and it’s led to renewed calls for the league to take some sort of action to increase scoring.

Here’s the background: NHL scoring rates climbed steadily from 1950 through the early ’80s, and peaked at about 8.0 goals per game. The rate then dropped but stayed high, finishing over 7.0 for the last time in 1993. Then came the first lockout and the dead puck era, with goals per game plunging all the way to the low 5.0 range leading in to the lost 2004-05 season. There was a spike back over 6.0 after the 2005 lockout, but it hasn’t been sustained and scoring has dropped down to roughly 5.5, only slightly better than the dead puck low point. That’s where we find ourselves now.

Although it’s true that more offense doesn’t automatically mean a more entertaining product, and a 1-0 game can be far more exciting than a sloppy blowout, there does seem to be a consensus that the league could use more scoring. But how? While other leagues have responded quickly to dips in offense, Gary Bettman’s NHL has always struggled with exactly what to do about it.

Let’s take a look at 10 of the more common suggestions for increasing NHL scoring and consider whether they could actually work.

The logic: NHL rinks are 85 feet wide, which is smaller than the standard international ice surface. That extra room would create more space for skill players and make it harder for defenses to clog the neutral zone. After all, look how exciting the games are in international tournaments like the Olympics or World Juniors.

Would the NHL try it? Zero chance. The league had its opportunity to move to a wider ice in the mid-’90s, when a wave of new arenas were built. It didn’t, and it’s just not possible to make the change now.

Would it work? Probably not. Even putting aside that many “international” tournaments are played on North American ice, those games are exciting because they’re best-vs.-best affairs. Fans of European leagues will tell you that more typical games are often just as dull over there, and sometimes even more so because the wider ice makes executing the trap even more crucial.

Make other changes to the rink layout

The logic: Maybe you can’t make the ice surface bigger, but you can still move things around. Tweaking the way the various zones are laid out can throw a wrinkle into established defensive systems and create more room in key offensive areas.

Would the NHL try it? It has in the past, several times. It moved the nets out to create more space in Wayne Gretzky’s old office. It moved the blue lines out, and added the trapezoid behind the net to prevent goalies from over-handling the puck. It even “eliminated” the red line. (It’s still there, but the two-line pass rule it was mainly used for came out of the books.)

Would it work? It’s been hit-and-miss. Moving the nets out didn’t work at all (they went back to the old layout a few years later), and the trapezoid seems to cause more confusion than actual offense. The red line change did open things up, at least initially, though defensive-minded coaches eventually began to adjust.

Reduce the size of the goalie equipment

The logic: Here’s what an NHL goaltender looked like 30 years ago. Here’s what one looks like now.

Would the NHL try it? It’s been trying to crack down in recent years, though most fans seem to agree that the standards still aren’t strict enough. But the league can go only so far — goalies from previous generations weren’t facing slapshots from modern composite sticks, and in an age where we all say we want player safety to be a priority, it’s going to be tough to tell anyone that they need to cut back on protective equipment.

Would it work? Probably. This idea seems to come up especially often when former players are talking about the lack of offense. But not everyone is convinced.

The logic: The goalies are bigger and their equipment is bigger, which adds up to a lot less net to shoot at. So why not make the nets bigger, too, and restore some of that balance we’ve lost over the years?

Would the NHL try it? They don’t seem to want to. It’s worth pointing out that, in general, hockey fans seem to viscerally hate this idea. I can’t figure out why that is — an increase of two inches all the way around would barely be perceptible to the average fan — but the size of the net seems to be sacred ground for many.

Would it work? Yes, though the impact obviously depends on how big a change you make. Nobody wants to see soccer-style nets, but even a change of a few inches would be enough to turn all of today’s shots ringing off posts and crossbars into goals. And knowing that shooters had more net to aim at would force some subtle changes to defensive coverage, since they’d have to account for more space where snipers could realistically expect to score.

The logic: Hey, if we can’t come up with ways to create more offense 5-on-5, at least we can try to bump up the numbers by creating more random power play situations and hope nobody notices. After all, the dirty little secret of the last post-lockout scoring boost was that it was essentially all created by an increase in power plays.

Would the NHL try it? Definitely. Oh, they’d never admit to it, of course. They’ll come up with some sort of justification for ridiculous rules that defy all logic.

Would it work? More penalties will lead to more goals, and that’s especially true if those penalties seem oddly tailored to created 5-on-3s. Of course, more power plays isn’t really what fans mean when they say they want more offense, but if your priority is to just shut everyone up without making any hard choices, this is an appealing option.

Forget new penalties; just start calling the ones already in the rulebook

The logic: If the referees just called all the hooking, holding, and interference, scoring would go up. Not only would you create more power plays, but players and coaches would eventually learn that they couldn’t get away with playing a clutch-and-grab style, which would create more speed and flow at five-on-five.

Would the NHL try it? It did, in 2005. After a decade of seeing the game turn into something just short of a rodeo, the league announced a zero-tolerance approach to various penalties. That crackdown got most of the credit for the big jump in scoring that followed.

Would it work? Common sense says it would, but you have to stick with it. After those first few post-lockout seasons, referees seem to have backed off. We’re not back to the late ’90s days of open-field tackles, but the standards are slipping.

The logic: Since such a big chunk of offense comes from power-play goals, find a way to make them even more effective. That could include forcing penalized teams to serve the full two minutes even if they give up a goal, or no longer allowing shorthanded teams to ice the puck.

Would the NHL try it? The league has made some minor tweaks in recent years, such as always starting a power play in the offensive zone no matter where the foul occurred. But that’s a small change, nowhere near as radical as the suggestions above.

Would it work? Yes, in the sense that it would result in more goals. But again, increasing power-play scoring doesn’t do anything to address the bigger issue — most of the game is still played five-on-five, so any fix that doesn’t help in that area is really just a Band-Aid solution.

Forget messing with the rules; just contract a few teams and be done with it

The logic: The NHL expanded too quickly over the years, and the talent pool is now watered down. There are too many players who just aren’t skilled enough to score, and most of them stay in the league by figuring out ways to slow down the good players. Drop a half-dozen teams in bad markets, and the quality of every other roster would go up.

Would the NHL try it? Good lord, no. It’s getting ready for more expansion.

Would it work? Not necessarily. For one thing, talk of a watered-down talent pool ignores the influx of Europeans the league has seen since the late ’80s, not to mention the increase in American players. And besides, more bad players also means more bad goalies and defensemen, who in theory should be giving up more goals.

The logic: At its heart, the NHL’s offense problem is a coaching problem. It turns out hockey is a game in which it’s very difficult to score against a well-implemented defensive system, and coaches have spent the last few decades figuring that out. All the rule tweaks in the world won’t add up to much, as long as almost every coach in the league is emphasizing defense first.

Would the NHL try it? There’s nothing the league can do here, obviously. Individual owners, on the other hand, could make the decision to focus on offensive-minded coaches who would play a more entertaining style. That could be a good business move, especially in some markets that are struggling to attract fans.

Would it work? It’s a nice idea in theory, but it has one critical flaw: Defense wins. And at the end of the day, owners would prefer to have a boring winner over an exciting team that misses the playoffs. Eventually, the day may come when an offense-first coach leads his team to an unexpected championship, at which point the copycat factor could kick in. But don’t hold your breath.

Ignore the problem, hope it goes away

The logic: This is making my head hurt, let’s talk about something else.

Would the NHL try it? It did for an entire decade, starting in 1995.

Would it work? Let’s just say we’re probably going to get a chance to find out.