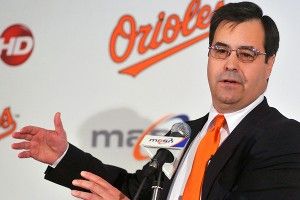 Dan Duquette is no stranger to statistical concepts in baseball. He hired an eager researcher named Ari Kaplan to build advanced scouting software and run analytics for him back in the early ’90s, when Duquette was just starting his first general manager’s job with the Expos. When he jumped to the Red Sox in 1994, he hired Mike Gimbel, a sabermetrician-by-hobby who’d offered him advice from afar while Duquette was still in Montreal. Years before the publication of Moneyball, Duquette was exploring every avenue to gain an analytical edge over the competition.

So when you remind him that the Orioles won 93 games and crashed the playoffs last year largely thanks to a historic and impossible-to-sustain 29-9 record in one-run games, he gets the question that’s coming next. Duquette understands the concept of regression to the mean. He knows that on paper, the Orioles, more than any other team in baseball, are ripe for a crash back to earth in 2013. He just doesn’t think that’s going to happen.

“I think we can be as good or better next year,” Duquette said. “Because we’re returning just about the entire ballclub. Our players are at an age where they should continue to improve. Plus we have another year of experience, along with pennant race and playoff experience.”

Last winter, Duquette talked with Grantland about his goals for the team, even as a long and difficult rebuilding process appeared to lie ahead. This time, the Orioles GM elaborated on his reasons for optimism in 2013, after a 2012 season that shocked the baseball world.

How did the Orioles do what they did last year?

We got some decent starting pitching, had some pretty good pitching depth. The core players up the middle are really good, they’re terrific defenders who can also hit. We had good leadership, Buck [Showalter] did a great job. The bullpen had a lot of depth to it; that helped us win a lot of close games.

That starting pitching was the big question mark heading into last season. What did you see in [Jason] Hammel and [Wei-Yin] Chen that made you pursue them?

Our scouts did a good job in recommending Hammel, and our pitching coach Rick Adair worked with Hammel and Chen all year. Fred Ferreira, who’s got an incredible track record, signed something like 60 big leaguers. He signed Miguel Gonzalez. That didn’t happen until early March. Our minor league pitching coaches did a good job. Rick Peterson’s organization-wide pitching program made a big difference. Having that organization-wide pitching program that emphasizes good delivery and change of speeds really helped our pitching throughout the organization.

We had a real transformation in our pitching staff during the year. From July 4 on, after Chris Tillman came back, he, Gonzalez, and Steve Johnson went something like 22-7, with a 3.33 ERA after that. They were all effectively first-year pitchers. When Brian Matusz and Tommy Hunter went to the bullpen full time, they were terrific too. It was particularly our pitching and defense in August and September that gave us a chance to win a lot of games.

Do you see the starting staff performing as well this year?

We’ve still got some more work to do to build a solid rotation for this year. But we’ve got young guys who could establish themselves as big league starters. Hammel and Chen are the veterans; then we’ve got Tillman, Gonzalez, Johnson, Zach Britton. We like T.J. McFarland; he did a good job in the minors for the Indians organization last year. He’s left-handed, keeps the ball down, 23 years old — you want to give a guy like that an opportunity.

Kevin Gausman was the top college pitcher in the draft a couple of years ago; Dylan Bundy was the top high school pitcher two years ago. Bundy’s making good progress. Both he and Gausman pitched in Double-A, then in the Double-A playoffs. Bundy came up soon after that. My expectation is both will help the club this year. I don’t know if they’ll break with us and start the season. But expectation is they’ll be in the big leagues and be there to help us win.

The depth of the bullpen really helped, that kept us in a lot of games. We had some serious power in our lineup and won a lot of games with the home run. Chris Davis had a breakthrough year, hit 33 homers. [Adam] Jones had over 30. Matt Wieters progressed as an RBI man. It was really bullpen and power. You gotta give a lot of credit to Buck, the way he managed the bullpen’s workload, the way he gives guys a lot of confidence.

People seem to always talk so glowingly about Buck. I’m interested in specifics. What does he do that maybe isn’t obvious looking in from the outside?

He provides solid, dependable leadership, and the players believe in him. He’s a taskmaster and holds players accountable, but the players also really enjoy playing for him.

Obviously it helped to have someone like Manny Machado get promoted and help the team. But it seemed like Buck also pushed the right buttons, doing things like moving Mark Reynolds to first …

The perception of our team was that we were a poor defensive team. But we transformed into a very good defensive team as the year progressed. When Reynolds went to first base, he really worked on his defense, handling short-hoppers, everything. And you know, it never hurts to follow Earl Weaver’s advice: Find as many shortstops as you can, then figure out later where they’re going to play in the big leagues. [Nate] McLouth was a plus in left field. The real strength of the team are our players up the middle: Jones, Wieters, and J.J. Hardy, they’re Gold Glovers. Stabilizing our defense made our pitching a little better. And instead of needing five runs to win a game, we only needed four.

OK, it is a young team, it is a team that won 93 games last year. But of course it’s not a perfect team either. There were some stars out there in free agency, and a fair number of solid players at various positions. The Orioles turn consistent profits every year. [Editor’s Note: As noted in this Hot Stove piece from December, the Orioles likely make $100–$150 million a year from their ownership of MASN alone, yet they’ve gone from one of the heaviest-spending teams in the league to running a below-average payroll.] How much thought was given to making a big move this offseason?

The players we have on the roster, a lot of them were on one-year deals. So we have an increase in our payroll from players who performed well. Thirteen of them were in the arbitration process, so we went from about $82 million last year to over $90 million this year. By virtue of their performance, they absorbed additional resources. That’s the way it should be; if you perform well, you should be rewarded.

We looked around for a top starting pitcher and a middle-of-the-lineup hitter. But the cost of a top starting pitcher we thought was too prohibitive in terms of what we’d have to give up in a trade. We feel good about what we have. We have a strong middle of the lineup with Jones, Davis, and Wieters. With Markakis and McLouth we have good table-setters. Maybe Machado will continue to improve. We’re hoping [Nolan] Reimold comes back and plays well. Maybe some of those young pitchers will improve this year. We picked up Travis Ishikawa, he’s an average hitter and a good defender. Hopefully our young guys will continue to develop. A little more patience at the plate would help us offensively.

Where do you think the team stands compared to the rest of the AL East?

Our ballclub improved more than any other in the big leagues last year. We got to the playoffs, we won three playoff games. We’re essentially the same club, and we hope to improve. We certainly have some more work to do. We need to get more quality innings out of our starting pitchers. And yes, it’s always a very tough division; these teams have a lot of experience and depth. But we’re on the right track.

Last year when we talked you said you wanted to get back to the Oriole Way. What does that entail? How are you doing with that?

The Oriole Way was a very specific way to play baseball, every person in the organization understood it. It started with good scouting; the morale of our scouts is good. Our player development operation needs some work to get up to the point where it’s producing players regularly for the big league club. Overall we made good strides. The attitude of our players is to work as hard as we can to win today’s game. The fans really got behind us, especially in August, September, and October — the playoff game against the Yankees was terrific. We’re a hard-working, lunch-pail club. That’s who we are. That’s who the city is.