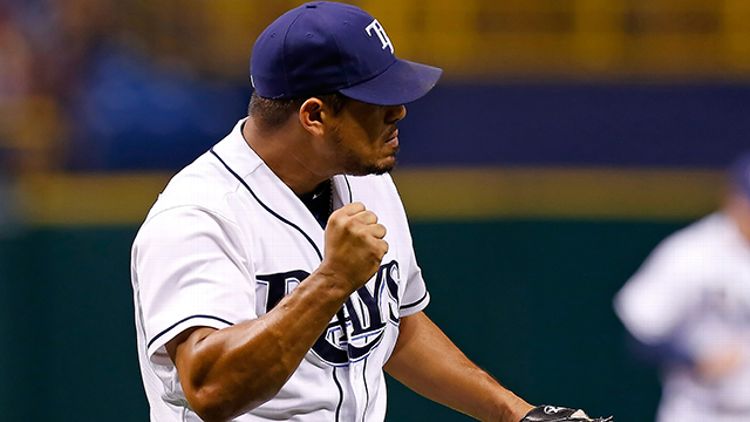 Joel Peralta is a real-life Eddie Harris. The 37-year-old Dominican might have more pitching tricks than anyone this side of the Major League character, most of them legal, one of them illegal.

Peralta didn’t make his minor league debut until he was 24. He appeared in 300 minor league games over the next decade, spending parts of seven different seasons at Triple-A. Peralta bounced around from the Angels’ system to the Royals, then to the Rockies, finding only fleeting success. Playing for the Nationals in 2010, he posted some of the best numbers of his career, with a strikeout-to-walk rate of better than 5-to-1 and career bests in ERA (2.02) and FIP (3.02). Signed by the Rays the following offseason, he’s found a more lasting home in Tampa Bay, emerging as the team’s go-to eighth-inning guy and one of the most effective setup men in the league. Though his bag of tricks might rival ol’ Eddie’s, Peralta’s a uniter and not a divider in the clubhouse, described by teammates as a bridge between different cliques rather than an antagonizer of Jobu worshippers.

I sat down with Peralta before a recent game at Coors Field to ask about his evolution as a pitcher, his old-school techniques for fooling hitters, and how confidence has played a role in his success.

It took you a long time to get here. Tell us about your journey to this point, starting with you growing up playing in the Dominican.

Growing up there as a kid in those [days] was pretty tough. We didn’t have a lot of help the way kids do now. There are more people involved there now, more people to help out, more [academies]. We might have one guy who’d help you learn and get better. But not like it is now, where you have a bunch of guys who are able to teach you. When you have to go through a lot of things and a lot of years to get to the big leagues, it makes you appreciate what you have even more.

You’re 37 years old and pitching better in the past couple of years than you ever did before. How does that happen?

To me, it was experience. Experience and getting the right pitching coaches. When I was young, throwing hard, I was just trying to challenge guys. I wasn’t pitching, I was just throwing the ball. I learned the hard way how to pitch, when I’d try to challenge guys and it wouldn’t work. I just got smarter, figuring out how to pitch. Keith Comstock helped me out when I was in the minor leagues with the Angels. But the main guy before I got here was Bob McClure with the Kansas City Royals. He really helped me out; he was probably the guy that taught me the most about being smart, control, commanding pitches.

I want to ask you about some of the things you do to keep hitters off balance. One of the things you’ll do is quick-pitch hitters, throw before they’re ready. How did you pick that up and how do you think it helps you?

I started doing it back in 2010 when I was with the Nationals. It just came to my mind that not many guys were doing it, so if I could get at it, hitters might not expect it. I just started practicing it myself. The first time I did it, Pudge Rodriguez was the catcher. He told me it was a good move to do it. And it just went from there. I started doing it more often, started getting guys off balance. It’s really helped me since I started doing it.

Another thing you do is throw a splitter up in the zone. Usually a splitter will dive out of the strike zone and get hitters to swing over top of it. When a pitcher throws one up in the zone, you’ll hear announcers say, “Oh, he hung that pitch.” But you’re doing it on purpose, almost like a changeup. What made you decide to start doing that?

The split-finger — that’s the pitch that got me here and kept me here in the bigs. I’m able to get lefties out with it. When the split is going good, they see the ball up in the zone, even if it’s up, it’s moving, and they’ll swing at it. And that’s what I want: for them to swing at that pitch. It’s not always a pitch you can control for a strike but it can be hard for hitters to make good contact on it, too.

You also pitch backward. How did that come about?

I tried that when I got up to the bigs. But I got better at it when I lost a little bit of velocity. I started doing it more, and I found I was able to throw the breaking pitch early in the count with some success.

You were suspended last year for having pine tar in your glove. There’s a fine line in baseball on what you’re allowed to do and not allowed to do as a pitcher. For example, you can go to the rosin bag and if it’s wet and feels tacky, you can do all kinds of things with it. But there are other substances you can’t use that might help you less than something like that. Do the rules strike you as weird, or inconsistent?

I don’t think pine tar is an advantage because it doesn’t make the ball move. It’s more about having a grip on the ball. But like you said, I throw a split — pine tar doesn’t help you get more movement on a split, doesn’t help you throw it better. If you scuff the ball, or use the Vaseline, the ball’s going to drop or move side to side. With pine tar, it’s not going to do that. But I said at the time that 85 percent of pitchers in the big leagues are doing something. Anyway, it’s over with.

I talked to one of your teammates, and he was saying you’re a good clubhouse guy. Not just that, but that you’re a kind of bridge between the Latin players and the Caucasian players. Is that something you consciously try to do, to get more people in the mix?

Well, I’m not trying to be a bridge. Especially with this team, I like everybody here; everybody gets along really good. Since everybody already likes each other, it makes it easier. I just try to have as good a relationship with all my teammates. I mean, we’re together for eight months; you have to.

Someone also suggested to me that you had a good influence on Fernando Rodney when he came to the team. He was a talented pitcher when he came to the Rays, but not someone who’d had great results. He made mechanical adjustments and did some other shifts, of course. But people have talked about you helping him get more comfortable on a new team. What’s your relationship with him now?

We’ve become good friends outside of baseball. We knew each other before, but not like this, not the same way. He feels comfortable here. I think he was the same guy with Detroit and the Angels. He just didn’t have the confidence in himself to show what he’s got. We help each other during the games, too. We talk about pitching, about the tendencies of the hitters; that helps, too.

Sam Fuld told me to ask why you think he used to dive for balls when Wade Davis was pitching, but not when you were pitching?

[Laughs.] Yeah, I gave him a hard time about that. One time last year, he did dive for a ball when Davis was pitching, and he wasn’t able to make a catch on a ball when I was pitching — it was in Boston, actually. Then after the game, I told him, “If I was a white guy, you would have dived for it!” [Laughs.] Since that day, we’ve been just messing around with that. But of course I know he would dive for anybody, we just have some fun with it.

You guys have a reputation for having one of the loosest clubhouses in the game. How do you find it different here, compared to Kansas City or the Rockies or the Angels or the Nationals? And how much of that is Joe Maddon?

You know, that guy gets the best out of you all the time. He treats you like a professional ballplayer. Even guys the first time they get called up — he treats them like they’ve been up for 10 years. And that gives you confidence. I’d never been on a team before where a rookie comes up and is treated that way. That’s the main thing: He brings the best out of you, just with his personality. I knew him before; when I came up with the Angels, he was the bench coach. I met him over there and knew the kind of person he was. But I’d never played for him. Then I got here. And one of the reasons I’ve done so well since I got here is because of him. Just to go out there and know that if I do bad, nobody’s going to talk down to me or talk behind my back. I know he’s got my back 100 percent. That gives you confidence to go out there and fight.

Is it something active like him coming to talk to you or a pat on the back, or is it more a feeling with Maddon?

He’ll go up to you sometimes. He did that with me last year when I had a really rough start to the season. One day after a really bad game in Boston, he came up to me and said I’m still going to be his setup guy, that he’s going to put me right back in the next game in the same situation. That really helped me out. [Note: Peralta gave up four runs without recording an out in Boston on April 13 of last season, raising his season ERA to 37.80. Though regression toward the mean surely played a role in his improvement thereafter, Peralta did indeed pitch much better after his talk with Maddon, posting a 2.85 ERA for the rest of the year, with 82 strikeouts and 13 walks in 66⅓ innings pitched.]

I can’t let you go without asking about the postgame clubhouse parties. For about 15 minutes after every win, you guys crank the music and there’s a big, crazy party. No matter where you’re playing, or if you’re coming off a losing streak, it’s always like that. What was your reaction the first time you saw that?

Definitely, I found that really crazy the first time. [Laughs.] It’s what we are. Joe likes fun. He wants us to have fun out there. Every time we do that, we feel like, OK, it’s one step closer to the World Series. We try to enjoy every minute of it. I think that’s part of why we’ve been pretty successful the past couple of years.

The Jalen Rose Report With David Jacoby (Plus Video!)