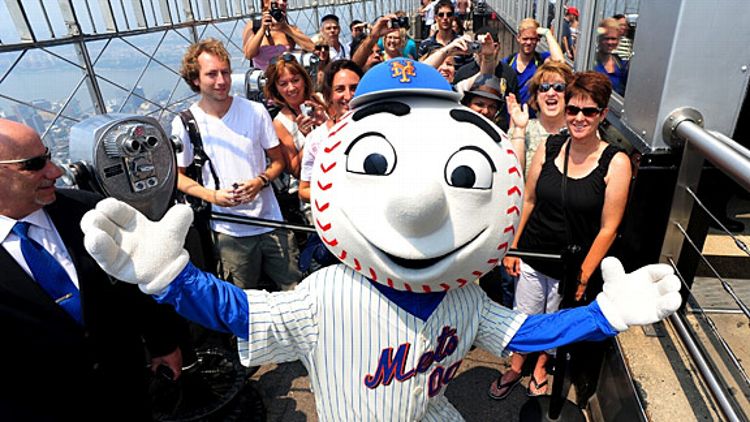 10. The weekly bleary-eyed Monday morning process of nearing the newspaper guy by the subway stairs and trying to remember without breaking stride whether it’s the Post that has that guy you hate or the Daily News? You really don’t want to risk guessing wrong so you buy both which means just a coffee at the cart outside the office instead of a coffee and a croissant. You read the dueling articles about another Knicks loss, and the two papers say either exactly the same thing or exactly the opposite, which either way is vaguely annoying and not worth the croissant, and also why is this train moving so slowly? You flip the page violently, tearing a shred off the corner, and voila: You are now in precisely the right frame of mind to enjoy “Equal Time” with Phil Mushnick.

8. The fact that only in New York could two people as disparate as Pat Riley and Jeff Van Gundy be considered representative of what the city is all about. (Maybe it’s good news for Mike D’Antoni that no one says that about him.)

7. The “My beer is Rheingold the dry beer/ think of Rheingold whenever you buy beer” song that gives you memory whiplash when you hear it because it got a lot of airtime on the FAN, which got a LOT of airtime on the little My First Sony radio that lay next to your pillow well after the age of embarrassment because it got a great signal and never stopped working. Also from the FAN: Mike Breen being funny — I swear! — on Don Imus; the bizarrely soothing how-you-be’s of the Sweater and the Schmoozer, callers Eli from Westchester (real) and Antoine from The Bronx (call coming from inside the building); the Alger-esque tale of Joe Beningo, a random regular caller who won a contest to try out as a host, earned the overnight show, and now works the 10-1 shift during the day; and Mike and the Mad Dog (miss you guys) devoting what was legitimately several hours each week to guessing the weekend’s TV rating numbers:

“OK, Mikey! First up we got! The Green Bay Packers! At Carolina.”
“What time was the game, Dog?”
“1 p.m. game, Mikey.”
“So that’s noon in Green Bay.”
“That’s noon in Green Bay.”
“Carolina. Well, there was no golf on …”
“No golf, no NASCAR. NBC was showing figure skating, which, talk about a sport that is an absolute disgrace …”
“This isn’t the first time with the French judges. It’s just an embarrassment.”
“Packers-Panthers, Mikey!!!”
“Two … not terrible teams, Dog, but you know, didn’t the Jets play at 1? [sound of shuffling papers] The Jets played at 1. I was on the bench so I had no concept of time. Everyone’s watching the Jets at 1, Dog. Bill Parcells, Dog … so back to that game, I’m gonna say two … two-seven.”
“MIKEY IT WAS A TWO-TWO!”
“A two-two. I knew it. I knew everyone would be watching the Jets. We’ll be right back after this.”

6. The outlandish and manipulative piece of New York propaganda that aired during the epic Barcelona Olympics and cemented your New York fandom. The commercial was so cherished you kept a blank VHS tape around and would lunge for the VCR whenever you heard the opening strains, the same way you lunged at your double tape-deck to record Ace of Base songs off the Top 40 radio station. The ad features Al Roker and Sue Simmons and Jerry Seinfeld and the Boy Choir of Harlem and some cool people at the 1:22 mark who are clearly heading to Dorrian’s after they’re done with the tea and the parasols on the lawn. (NOTE: The 2007 remix with Tiki Barber is, like the 2007 New York Mets team, never to be spoken of again.)

5. The hatred for and distrust of Jim Dolan, which is so extreme that sometimes you think maybe it’s kind of looped back around and turned into a twisted communal affection, the kind of shared fondness that a group of college friends feel more strongly for, say, the homeless woman who recites Shakespeare and sells loose flowers outside the all-night hoagie shop than they do for their actual and expensive classes.

4. Those precious few half hours in late August or early September when the Flushing Meadows footbridge resembles a Saharan plain, with slithering heat waves, glittering mirages, and herds on the move. In one direction plod the weary folk who have emerged sunburned (despite their visors) from the US Open daytime early-round sessions and are returning to Connecticut for dinner via Grand Central via the 7. They walk past sleeker, cleaner versions of themselves, most arriving from the office for the prime-time evening ticket — Nadal, someone has heard, against some guy who has no chance — and look, even the men, like chic gazelles. (In contrast to the tipsy wildebeests in faded black Piazza jerseys trudging toward Citi Field.)

3. The purple striped velour suit Walt Clyde Frazier was wearing when he invented the word “whimsicality” on the spot to describe Carmelo Anthony’s 3-point shot selection to you.

2. The day you bounced from work to stand a couple of blocks away, thigh-deep in pounds of paper still continuing to rain down from higher up than you could ascertain without risking rogue confetti to the eye, which you later learned was not a dissimilar circumstance to the first ticker-tape parade down Broadway in 1886, as described in the New York Times:

The street was packed, and many were the strangers and pretty country cousins gazing in open-mouthed wonder at the colossal buildings. All this display was an inspiration to so many imps of office boys, who, from a hundred windows began to unreel the spools of tape that record the fateful messages of the “ticker.” In a moment the air was white with curling streamers. Hundreds caught in the meshes of electric wires and made a snowy canopy, and others floated downward and were caught by the crowd. This was altogether too much fun, and the office boys had to give way to their elders. More and more of the tape went skimming through the air. […] There was seemingly no end to it. Every window appeared to be a paper mill spouting out squirming lines of tape. Such was Wall-street’s novel celebration.

That particular ticker-tape parade was done to celebrate the dedication of the Statue of Liberty, and you feel a little silly as you watch Eli Manning and Tom Coughlin go by on a float, especially because Tom Coughlin is wearing what resembles a priest collar, which is awkward? But then you realize that the Giants inexplicably beating Dallas AND Green Bay AND New England is much more important and worthy of the Canyon of Heroes than some novelty statue. Go Big Blue!

1. The time-capsule letter you wrote to yourself as a 16-year-old in 2000 that you got back last year, which contained hopes for the future both terrifying (“… have kids by age 25”) and tragic (“Please let the Knicks, Rangers, Mets, and Giants win a championship this decade!”) You can’t quite make out where the Devil signed it, though — he must have used invisible ink.

Katie Baker is a staff writer for Grantland. All of her worldly possessions are currently in a truck headed to California. Follow her on Twitter at @katiebakes.