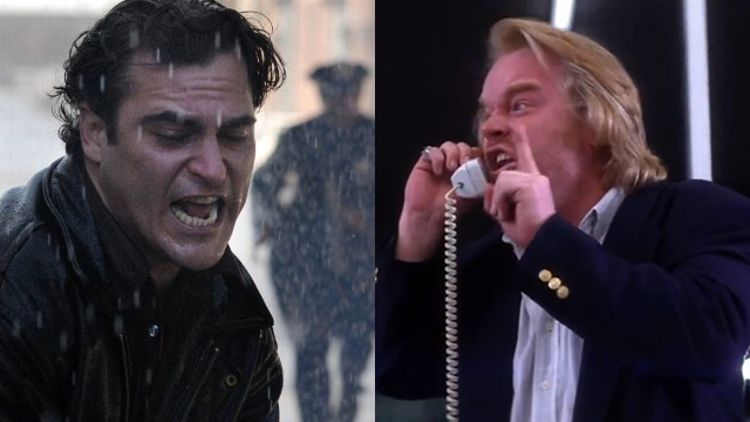 This week, Paul Thomas Anderson’s The Master gets a limited release, effectively kicking off Oscar season. There are many reasons to be excited about this movie, but chief among them is the chance to watch powerhouse thespians Philip Seymour Hoffman and Joaquin Phoenix act the living daylights out of one another. In anticipation of this battle for the ages, we’ve put together this pregame highlight reel and asked our staff: Are you Team Hoffman or Team Phoenix?

Bill Simmons: Team Hoffman. More important, this little exercise forced me to choose between two of my favorite movies ever (Boogie Nights and Almost Famous) and my two favorite Hoffman performances ever (Scotty J. and Lester Bangs). I debated it for about 2.5 seconds before remembering how much Hoffman crushed those Lester Bangs scenes. Iggy Pop! AMEN! He’s barely in the movie! I think they filmed five scenes total with him — three with Hoffman on the phone — and according to Cameron Crowe’s director’s commentary on the Blu-ray, Hoffman was sick the entire time, but they only had him for four days and plowed through the scenes. He ends up unleashing one of the greatest “movie lines as high school yearbook quotes” ever (“You’ll meet them all again on their long journey to the middle”), eviscerating Rolling Stone and what was happening to magazine journalism in general, calmly foreshadowing everything that was happening to rock and roll in the mid-’70s (particularly how commercial it was becoming), and giving the sagest advice that’s ever been given in a movie to any young writer (“You have to be honest and unmerciful”) and anyone who’s ever been uncool (“The only true currency in this bankrupt world is what we share with someone else when we’re uncool”). He’s in the movie for the perfect amount of time. And at no point does he ever beg William Miller, “Can I kiss you? I just want to kiss you on the mouth.” Thank God. Because I don’t think I could have handled that moment twice.

PSH as the late, great Lester Bangs, laying the philosophy on the young Cameron Crowe manqué and saving the preposterous rock-and-roll fairy tale that is Almost Famous. Bangs was most renowned for being a wild man, but Hoffman tapped into the lost romantic at the heart of people like him. (For political writers, it’s Hunter S. Thompson, whom stupid people latch onto for the invective and the excess, and miss the fact that he was one of the last true believers in what he called “what a monument to the best instincts of the human race this country could have become if we could have kept it out of the hands of greedy little hustlers like Richard Nixon.”) This is where the honesty of real journalism went to die.

Juliet Litman: There are clearly some very public fans of Almost Famous here at Grantland, and I am one of them. After his performance as music journalist Lester Bangs, how could you not be on Team Hoffman? He doles out all the advice you could ever need in life. How to talk to your boss: Tell him it’s a think piece. Should you get involved in a seductive profession like rock and roll? No, do something stable, like becoming a lawyer. Is it ever too early to listen to Iggy Pop? No. But most important, he gives you all the impetus you need to stay home on a weekend night. When someone asks you what you did last night, all you have to say is, “I’m always home! I’m uncool!” Conversation over.

Amos Barshad: A week ago I did a post called “If The Master Is Any Good, You Can Thank Joaquin Phoenix’s Fake Rapping.” It was supposed to be tongue-in-cheek. Phoenix had explained to the Times that doing I’m Still Here — growing a crappy beard, gaining a bunch of weight, saying the N-word, doing blow, etc. — had directly led to the techniques he employed in his Master performance. And since the former was laughed off the screen and the latter is already being labeled an Oscar front-runner, the comparison seemed ridiculous. But I saw The Master last night, and you know what? Joaquin might be right. He mumbles, he bashes, he lolls, he clenches and twists his body, he digs out the blackest humor — yes, he’s skinnier and sadder this time, but it really doesn’t seem all that far gone from I’m Still Here. So, best-case scenario: The Master‘s accolades lead to a drastic critical reevaluation of I’m Still Here, and PSH retaliates by staging a public performance-art piece where he quits acting to become a Guy Fieri–esque Food TV personality.

Andy Greenwald: Philip Seymour Hoffman’s performance in The Master just might be the best of his career — it’s outrageously charismatic, the charming charlatan with a heart of … well, one never actually finds out for sure. But you can’t build a monument of bluster like that without a soft, swampy foundation. Boogie Nights gets a lot of deserved attention for its thready cocaine highs, but PSH’s Scotty is the self-loathing, morning-after lows. Few actors let themselves get as squishy, as needy, as uncomfortable to look at as Hoffman does here, his nose running faster than his mouth (“I’m a fucking idiot!”). Lancaster Dodd, flimflamming leader of The Cause in The Master, is the shiny MetLife Stadium constructed atop Scotty’s sludgy Meadowlands. (And to think: All he wanted to do was kiss Dirk Diggler on the mouth!)

Emily Yoshida: Gladiator was one of the first R-rated films I was taken to in the theaters (it was educational!), and Joaquin Phoenix will always be the dude who hugged his dad to death, which is why my stomach automatically knots up with nervousness every time I see him onscreen, and why his being cast as Johnny Cash in Walk the Line was a brilliant move. Plus, he sang all those Cash songs (and learned to play guitar), which means that between acting, singing, and pretending to be a rapper, he’s a triple threat.

The phone call in this scene could be any phone call, ever. So here’s a fun game for when you’re bored and the cable is out and you feel like being an irascible little scamp: Next time a close relative calls you, ask them, “What’s your name, asshole?” Only, when you do it, affect PSH’s flippant-yet-enraged snarl. Replace “Barry Egan” with the name of whoever is calling. “Mom.” “Your best friend, Lucien.” “President Barack Obama.” “Piers Morgan.” “Grammy Award–winning diva Toni Braxton.” Doesn’t matter. After that, the next move is yours — you’ll be having an interesting conversation, regardless of the outcome. Pro tip: Do not attempt Hoffman’s Shut-shut-shut-shut retort. It will end badly. In an aneurysm.

Tess Lynch: Nothing against Hoffman (I almost went with the Mattress Man clip), but I think Joaquin Phoenix should earn points here for his affiliation with the Children of God cult and the fact that he went by “Leaf” as a child because he felt left out of his siblings’ nature-themed name canon. Insidery! Outsidery! In fact, his alcoholism, traumatic past (the creepy circulation of his 911 call after River died), and general weirdness (beard era) are just the kinds of things that serve as recruitment magnets for, uh, certain other cults. Imagine the E-meter on a man who tried to light a cigarette in an upside-down car. “Man, relax.” I am relaxed. “No you are not. Like a tomato, you scream when sliced.”

Katie Baker: It was hard not to go with one of my favorite Philip Seymour Hoffman moments: his perfect reaction to Bunny’s, um, business proposal in The Big Lebowski. But everyone knows and adores that movie, and deservedly so; let’s instead throw a little love toward one of the potbellied thespian’s lesser films. I’ve long thought that Along Came Polly is pretty underrated: Not only did it help launch Alec Baldwin’s comeback, it also drove a stake into the decorative pillow industry, brought us the “’appy as a ’ippo” fable, and, thanks to Hoffman, introduced much of the world to the dark art of the shart. But that wasn’t even his best, or grossest, scene in Along Came Polly. No, that would be his sweaty and beleggingsed turn on the pickup basketball court, in which he pays repeated homage to Shawn Kemp and generally moves about the blacktop with all the elegance and humility of a rampaging water buffalo. (My favorite moment might actually be the way he calls for a timeout. We all know someone just like that.) I love Joaquin Phoenix and his Gladiator thumb, I really do, but only one man can truly LET IT RAIN, old-school.

Dan Silver: I’ve never looked at a film and said “Oh, Joaquin Phoenix is in that. That’s worth a look.” But I’ve done that quite a bit with Hoffman. So as far as I’m concerned this is a no-brainer. It’s Hoffman in a landslide. Phoenix is always solid, but at least for me, he’s never made an unwatchable movie bearable solely based on his screen time (see Moneyball). Phoenix also gets points deducted because he starred in one of those James Mangold practical jokes. But Hoffman, oh PSH, I do love thee. Although he won his only Oscar for Capote, I find him to shine brightest when he’s elevating would-be generic supporting roles by infusing nuance and depth (Lester Bangs, Phil the Nurse, and even the main baddy in Mission: Impossible III). Alas, I do feel all of these pale in comparison to the dramatic spectrum of a performance delivered in the criminally forgotten Charlie Wilson’s War. Hoffman’s Gust Avrakotos is a disheveled mess of a spy. He exudes confidence in his words and actions, and yet is an immensely rational and practical person. And lest we forget, he also doesn’t get sick at sea.

Mark Lisanti: What’s that, you say? You’ve forgotten that Joaquin Phoenix was even in Gladiator? Well, now you remember. You will always remember.

Normally, if you were to lock Phoenix and PSH in a windowless audition room with nothing but a stack of random script pages and a running Super 8 camera on a tripod, my money’s on Hoffman to be the one emerging alive. But today, on this battlefield, I’m going to war with Commodus. Watch this clip. The person who cut it together gets it. Joaquin doesn’t even need to say the words. He’s destroying with his eyes.

Fine. The suit of white armor helps. It would help anyone.

But today I choose Phoenix, rising from a sloppy pile of Hoffman’s perfectly evoked schlub ashes.

Rembert Browne: After being nominated for his third Academy Award for 2008’s Doubt, Philip Seymour Hoffman did what every great actor does to celebrate:

He did a voice-over for the children’s show Arthur.

Voicing the character of Will Toffman, the play director at the community theater, he teaches Fern how to shake her nerves, be herself on the stage, and (most important) have fun. One may call it a stretch, but there’s no The Master without Arthur. You heard it here first.