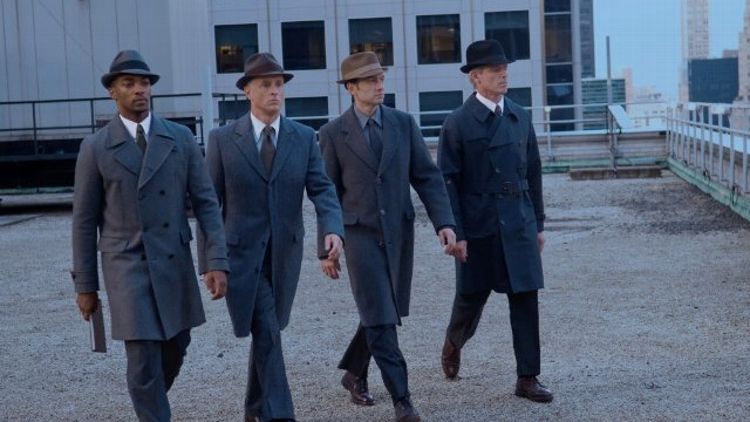 Gangster Squad makes its long-delayed debut this week, and the Grantland staff couldn’t help but notice that, from the looks of the trailers, at least, this film seems to feature a noticeable excess of hats. This places it in an important, rarefied echelon of headgear-oriented motion pictures, which we will now salute in this explosive first installment of the 2013 YouTube Hall of Fame.

Mark Lisanti: The Adjustment Bureau isn’t just a movie with hats in it. It’s the movie with hats in it.* The hats aren’t just stylish dome-dressing here; they’re crucial to the plot. They’re magic — nay, divine. They’re the headwear of Heaven’s enforcing angels, right off the pages of GQ’s “Cherub Rock!” spread in 2011, in which stars Matt Damon and John Slattery, naked but for a couple of impeccable fedoras, touched fingers across the gatefold. “Let there be hats,” read the caption, somewhat nonsensically.

And, damn, do they look sharp.

[*The Adjustment Bureau is also the movie with doorknobs in it, but that’s a tale for a different YouTube Hall of Fame.]

Dan Silver: It couldn’t have been more than five seconds after Daniel Craig and Naomie Harris walked into that outer office at the end of Skyfall that I turned to my wife and whispered in her ear, “She’s Moneypenny.” How did I know this before the “big reveal”? Like my fellow Bond aficionados, I immediately spotted the dead giveaway: the hat rack tucked away in the right-hand corner. You see, no super (cinema) spy has ever taken off, much less tossed, a hat quite like Mr. Bond (evil henchmen, on the other hand, are quite well-known for tossing their hats). From Connery to Lazenby and back to Connery, James’s airborne hat was always the prelude to his enduring flirtations with Miss Moneypenny. It was a playful gesture that Bond fans always looked forward to at a time when both Jack Lemmon in The Apartment and Sean Connery in Dr. No had almost exactly the same fashion sense. If the cavalcade of homages continues in Bond 24, then like 007 himself, the fedora … will return.

Dan Fierman: Ladies and gentlemen, the gauntlet is thrown. The defining cinematic hat moment of our time.

Fear of a Black Hat

Jay Kang: I’ve watched Fear of a Black Hat somewhere between 30 and 40 times. If you count all the times I’ve fast-forwarded straight to the Booty Juice video and the explanation of the butt as society, that number shoots up toward 100. If you haven’t seen this movie, do yourself a favor and go watch it now. The whole thing is on YouTube. If you’ve watched Fear of a Black Hat and don’t count it among your favorite movies, I really wonder if we can still be friends.

The Backstreet Boys, “All I Have to Give”

Juliet Litman: If there’s anything this decade is missing, it’s good dancing, and there’s no clearer reminder of this than the Backstreet Boys’ 1997 “All I Have to Give” dance routine. The number was first introduced in the song’s music video, and it was a natural follow-up to the chair dance from their “As Long As You Love Me” video. The hat routine required a much softer touch, though. It was a veiled tribute to Michael Jackson’s “Smooth Criminal” video — Michael’s white suit and pastel ensemble remained, only BSB upped the size and left their shirts open. Backstreet never achieved the famous acute angle between their leaning bodies and the ground that Michael did — and they didn’t even lean forward, just back! — but a teenybopper doesn’t care about that. All the kids (me) saw was impressive choreography requiring the Boys to balance a hat on their foot. When BSB embarked on their 1998 arena tour, the hat routine met its true potential. The live format allowed for an extended dance break in the song’s final minute, and Nick, Brian, AJ, Howie, and Kevin all shone. There were even a few extra MJ-inspired moves. (If you don’t love this song, I suggest you skip to the 3:53 mark to have your hat-loving mind blown.)

I Love Lucy, “Lucy Gets Into Pictures”

Emily Yoshida: As soon as the extra hands Lucy her costume and doubles his day rate with the line “I’m afraid it’s kinda heavy,” little else needs to be said. (Side note: This movie “Mr. Williams” is making, which we never see beyond this scene, looks like some seriously decadent Lynchian weirdness.)

Master of the Flying Guillotine

Sean Fennessey: This isn’t a hat you’d want to wear. Especially when you consider the fact that it’s a razor-edged spinning half-sphere with a drop-down netting — the titular Flying Guillotine — that looks like something from a demented beekeeper’s wardrobe. When applied, it’s used to decapitate one-armed boxers by a blind master with eyebrows that aren’t so much bushy as they are vine-like. And this master is trying to get a lot of dudes to wear his hat. This fight sequence is, as indicated by the video’s title, the baddest. I encourage you to watch it in full.

Charles P. Pierce: It says something about the genius of Duck Soup that this scene is only the second or third-funniest in the film, and that the riff with the hats is only about the second- or third-funniest thing about the scene. Both Harpo and Chico are at the top of their games, but the real star is Edgar Kennedy, who pretty much invented the slow-burn right here. At one point, he looks like he’s going to pull his chin right off his face. And Kennedy’s work has a practical modern application, too. I’m working on my own slow-burn. I figure it’ll save me a lot of unwanted attention at airport security. I think.

Andy Greenwald: Little-known fact for all you millennials out there: The performance of Johnny Depp’s hat in this 20-year-old movie single-handedly invented cupcakes; Portland, Oregon; and Zooey Deschanel.

Rafe Bartholomew: My favorite whimsical hate-watch. Nobody delivers like Depp.

Jonah Keri: No one said it had to be a hat you wear on your head.