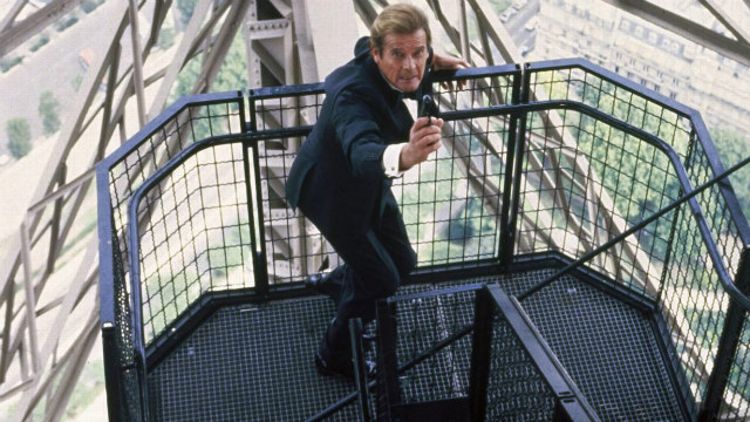 Editor’s note: Skyfall is coming to America on Friday. But you probably knew that already. And so, as is our wont, here is a haphazardly curated collection of Bond moments from the staff. Be forewarned if you’re strictly old-school on 007: You aren’t gonna be happy about Sean Connery.

The Spy Who Loved Me

Mark Lisanti: It’s a point that some of my colleagues may also make, but we tend to gravitate to the Bond of our youth. And mine was Roger Moore. [Editor’s note: Old.] It should go without saying that in this post–Casino Royale era, where Bond has been rebooted as a more nattily attired, more ostentatiously six-packed Jason Bourne, that Moore could never have been a new generation’s 007. And he shouldn’t be. That time has passed. (Don’t even think about Connery in 2012. It’s too painful.) But if there’s any moment in Skyfall that’s half as fun as this one, with its terrible green screen, gratuitous proto–X Game mogul back flip, and INCREDIBLY AWESOME SKI-POLE GUN, I will eat an entire martini glass. (Shattered, not whole.) Daniel Craig’s Bond would have snapped a parabolic Rossignol in half and stabbed a guy through the heart with it, muttered something self-consciously arch about sticking to the bunny slopes, and then trudged off joylessly into the distance. Moore knows how to make an exit, that’s all I’m saying.

Dan Fierman: My understanding is that this scene single-handedly sparked the sexual revolution. So feel free to blame Bond for hippies.

A View to a Kill

Mike Philbrick: Several things going on here (and none of the characters are actually James Bond). First there’s villain Max Zorin, played perfectly as always by Christopher Walken. Zorin wants to destroy Silicon Valley (probably because the guys over at Apple kept laughing at him for his computer skills). Then you have the equally crazy, but not equally recognized for said craziness, Grace Jones as the henchman named May Day. Not the best people to be in business with, but the guys around the table listening to Zorin’s plan see dollar signs, not sociopaths. Well, except one guy, who wants “no part of it, thank you.” Hey, that’s cool with The Walken, but you can’t stay at the meeting anymore. You’ll need to wait outside. That’s reasonable — until you remember that the meeting is on a blimp, so outside means a good day gone bad. Also, he never even got that drink they promised him. Rude.

1. Christopher Walken as Max Zorin, after David Bowie turned down the role because he “didn’t want to spend five months watching [his] stunt double fall off cliffs.” A rare blond Bond villain! Who wants to destroy Silicon Valley because he wants ALL OF THE MICROCHIPS! Such high stakes here!

2. Grace Jones as May Day. Her strength and hair really were superhuman.

3. A SACRED WHY, A MYSTERY GAPING (CAPING?) INSIDE.

4. The famous quiche. So delightfully out of touch. Everybody knows pesto was the quiche of the ’80s. Speaking of which, can I interest anyone in a pesto martini? I like my jigger of pine nuts shaken, not stirred.

How to Create the “James Bond” Lifestyle at College

Alex Pappademas: “Everyone you want to meet will come. It’s kinda like Fight Club. Except it’s Champagne Club. No one talks about Champagne Club. But it exists. It’s right here. In this room. With me. And my webcam and my horse painting. And I didn’t go out and buy this horse painting. Buying paintings is for chumps. I painted it myself. And I didn’t use a brush. I created a reality with my mind where the paint had no choice but to get on the canvas in the shape of horses. I sarged this painting into being. Just like James Bond would. Also, there’s no champagne.”

Dan Silver: This teaser contains all the elements that 007 aficionados love — a cool car, the gun-barrel shot, vaguely ominous VO hard-cutting to a montage of elaborate action played out over John Barry’s original Bond theme, and, of course, stark animated images that slowly reveal themselves to be made up of unclothed women. After seeing it, I was never more pumped to see a Bond film, and ultimately, I’ve never been more disappointed. Die Another Day is the single worst Bond film. The only good thing to come from it was that its mediocrity forced Broccoli/Wilson to reboot the series into the Daniel Craig era.

Emily Yoshida: Wait … so the joke here is that Halle Berry was actually talking about the diamond in her belly button? That was what she was so insistent that he “leave … in there” for “a few more minutes”? OK.

Y’know, the Austin Powers movies were kind of superfluous in the ’90s in retrospect.

Andy Greenwald: Re: yesterday’s Bond podcast — I KNEW THERE WERE SOME HIGH JINKS WITH A CELLO!

Amos Barshad: I considered spending some time here attempting to convince you of the virtues of Timothy Dalton, but then I remembered the mentality of, and decided to stay true to, 13-year-old me. So, instead, I’ll just use this space to point out one unassailable truth — Goldeneye on Nintento 64 is the best video game ever.

How Will Seattle Fare As the Latest City in Bravo's Reality-Exchange Program?