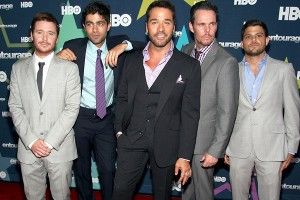 Eight seasons, 96 episodes, and roughly 10,000 Jeremy Piven foam-at-the-mouths; some might say this Earth has gotten all the Entourage it ever needed. And some might be wrong, bro. The Entourage movie that’s been halfheartedly rumored since the show ended its run in 2011? The one that, seeing as Entourage had a hard enough time coming up with conflict on an episode-to-episode basis, was presumed wholly unnecessary? It’s actually happening. Vince can do the movie!

Deadline reports, “The film will be directed by series creator Doug Ellin, who wrote the screenplay and who exec produced the series with Mark Wahlberg and Stephen Levinson. Deals are starting to be made with” Adrian Grenier, Kevin Connolly, Kevin Dillon, Jerry Ferrara, and Jeremy Piven. I guess they’re all available? Huh.

There’s no start date, and no plot lines being tossed around either. The latter part is worth inquiring about: While the finale purposefully left some loose threads, it mostly provided one of Entourage’s patented gushy, unearned, everyone’s-happy-now endings.

Here it is, re-imagined by one plucky “fan”:

Usually, the dead-TV-show-to-movie thing happens either (A) when the original was just so beloved and tragically short-lived that sheer fan raucousness revives it, like Arrested Development or (B) when the original is just too valuable an entity to let lie, like Sex and the City. Entourage is neither. It was a solidly conceived show bereft of ideas, and it lasted a surprising long time, for which we should all encouragingly pat it on the back. But a movie? A movie?! Seriously, what burning story line did Ellin not have the chance to do on the show for which he needs another two hours? I think the takeaway here is that we’ve gotten to the point where the numbers are small enough to make this kind of thing make sense; provided some kind of dedicated audience can be accounted for, almost anything can live on.

I’m sure some would love to see Vince and the boys mix it up one more time, just for old times’ sake. But I’d take a revival of HBO’s failed Entourage-in-NYC show How to Make It in America over this. Or even just a movie version of that time Michael Scott really got into Entourage.

That said, knowing of my weak and untempered constitution, there’s almost no way, once it comes to fruition, that I will successfully avoid giving money to the Entourage movie.