Yesterday in Beef: The Black Keys vs. Sean Parker, Madonna vs. Man in Mouse Mask 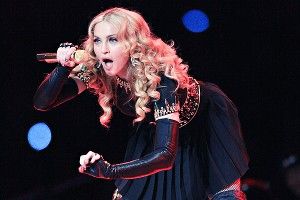 Monday was a pretty great day for random music-industry-based tiffs! Exhibit A: Drummer Patrick Carney of The Black Keys — the band who just got done semi-apologizing for bashing Nickelback — had some words for Sean Parker, the Napster/Facebook genius/schmoozer turned Spotify board member. Explaining why the Black Keys don’t release their music on Spotify, Carney said “Trust me, Dan [Auerbach, front man] and I like to make money. If it was fair to the artist we would be involved in it.” But also: “I honestly don’t want to see Sean Parker succeed in anything. I imagine if Spotify becomes something that people are willing to pay for, then I’m sure iTunes will just create their own service, and they’re actually fair to artists.” And, most important: “He’s an asshole. That guy has $2 billion that he made from figuring out ways to steal royalties from artists, and that’s the bottom line. You can’t really trust anybody like that.” Parker has yet to respond, but considering he survived being portrayed as an asshole, with a coke problem, by an ex-pop star, in an Oscar-nominated movie, you can assume he’ll be able to laugh this one off. Also possibly helpful: the aforementioned billions of dollars in his possession. Meanwhile, if you want to listen to the Black Keys’ new album, El Camino, you’re just going to have to illegally download buy it like everybody else.

And now, Exhibit B. None other than Madonna caught the ire of Deadmau5, the dance-music king, who took offense to a comment the pop luminary made while introducing Avicii at the Ultra festival over the weekend: “”How many people in this crowd have seen Molly?” (As even the squarest of middle schoolers know, Molly is a term for MDMA (a.k.a. ecstasy). By the way, Madonna’s new album is called MDNA). Over on his Facebook page, Deadmau5 went ham: “DUR DUR HAS ANYONE SEEN MOLLY???’ Such a great message for the young music lovers at ultra. quite the f’n philanthropist. but hey, at least yer HIP AND TRENDY! fucking cant smack my head hard enough right now.” Also: “Seriously, i giveth not a fucking single FUCK for slating on madonna for reaching an entirely NEW level of idiocy … i can appreciate her meteoric career, and all good deeds done, but WHAT THE FUCK WAS THAT? That’s your big contribution to EDM? Thats your big message to ultra attendies? hipsterspeak for looking for drugs? fuck off you fucking IDIOT. fuck.”

But unlike Sean Parker (seamless callback, right?!), Madonna’s skin proved quite thin, and she went on Twitter to clear the air. As MTV explains, “Madonna tweeted a 1989 image of herself wearing Minnie Mouse ears with a new thought bubble that read, “From one mouse to another. I don’t support drug use and I never have. I was referring to the song called ‘Have You Seen Molly’ written by my friend Cedric Gervais who I almost worked with on my last album … ” And that, somehow, was enough for Deadmau5, who wrote back “Fair enough, I was just voicing my concerns as I usually do. +1 respect for clearing it up personally … regardless, just be a little more aware of what you should represent at EDM events, and I’ll watch my mouth.” Call me crazy, Deadmau5, but I’m pretty sure she was talking about drugs.

In conclusion: Sean Parker is still an “asshole,” Madonna is arguably not a “fucking IDIOT,” and it’s always a good time when random famous people yell at each other.