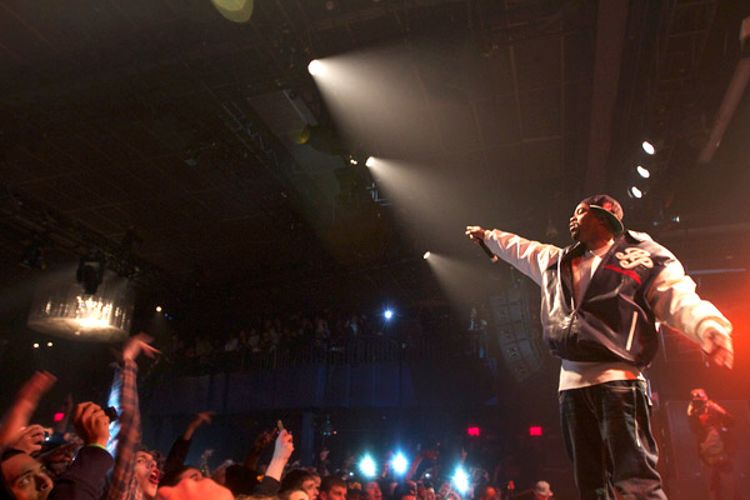 Full disclosure: I hate live music. Too loud, too crowded, too hard to have a conversation, and just generally too much yelling for my taste. However, my love of all things Wu-Tang so surpasses my distaste for live music that when I heard that the Clan was bringing their Witty Unpredictable Talent And Natural Game to a venue mere yards from Grantland HQ, I had to attend. OK, fine, I didn’t have to. I planned on attending, then didn’t feel like it, then only came around when I considered how livid 17-Year-Old Me would be if he knew that he would grow up to be Now Me.

Walking into the venue, expectations were low. Missives from previous Wu Fest tour stops reported that the Clan was featuring a roster with more holes in it than what the Celtics are currently running out onto the parquet, with Ghost and Rae being the most notable no-shows. That said, my fear wasn’t about who wasn’t going to be in attendance, it was more about the performance of those who would actually be on stage. I like my Wu-Tang mental manila folder just as it is. I was terrified that said folder would be polluted with the sounds and images of bloated, apathetic, somewhat recognizable Staten Islanders mumbling their way through verses that I clearly had put more effort into committing to memory than they had. To my delight, and, honestly, a bit to my surprise, that was not the case. I’m not going to sit here and tell you that seeing the Wu of January 2012 is in any way comparable to the Wu of the late ‘90s, but I am going to sit here and tell you that they’re still very much worth your time. Even if you hate live music. Based on my experience Saturday night, here are three reasons you will always enjoy a Wu-Tang show, no matter how much time has passed since they struck a match through the underground and ignited the industry. Don’t worry, they are all better than “17-Year-Old You would be upset with Now You if you missed it.”

If you are over 28 and even mildly interested in hip-hop you know every verse of every song a Wu affiliate released from 1993 through 1998. OK, maybe you don’t know them, but you can mumble along and hit the key lines. Rapalongability is a key ingredient in the recipe of an enjoyable hip-hop show. Without strong rapalongability, you’re basically just getting yelled at by someone you can barely understand. The Wu understands this and gives you what you want. You won’t hear Masta Killa’s Loyalty Is Royalty album; you will get nothing but heavy doses of tracks from Enter the 36 Chambers and choice cuts from solo efforts and features. Sure, it would have been nice to have Ghost and Rae there to Incarcerate Scarfaces and Rush Spotz, but when you get an onslaught of Ice Cream, Clan in the Front, C.R.E.A.M., Protect Ya Neck, and Method Man you barely notice their absence. The combination of the crowd’s familiarity with the set list and the collective facial contortions of an attempt to match the raw aggression, charisma, and intimidation of those on the stage was both comforting and humiliating. On the humiliation count, let’s put it this way: I would not want video of my scowling, gesturing, and rapping put on YouTube. I have my dignity. Well, sort of.

The Memory of ODB

Ol’ Dirty Bastard verses were special at this show, an opportunity for the Clan members on stage to eulogize their fallen brother by delivering his words in unison and with their own twist on his peculiar passionate delivery. Dirt McGirt left us with no shortage of classic lines; a particularly chilling moment was the crowd screaming, “Do you want to get your teeth knocked the fuck out?” at the top of its lungs. (It was also comforting to know the vast majority were not the type to make good on that threat.) In all forms of art people who leave this world prematurely are celebrated to levels that their body of work doesn’t warrant. But no matter what your opinion of Big Baby Jesus is, in that room, for those 90 minutes, you couldn’t feel that way about the legacy of Russell Tyrone Jones.

I don’t mean to start a debate over who is the “best” in Wu-Tang Clan. A case could be made for every original member to be considered the head when they form their hip-hop Voltron. (Except for U God. No one could make that case.) But on this night, in that room, M.E.T.H.O.D. MAN ruled the roost. Commanding front and center, wildly gesticulating during every verse of song like the conductor of an orchestra, snarling at the audience in disappointment when he felt it was not properly returning the passion he was serving, he looked like the Meth of old. This was no sold-out, 30,000-seat arena, it was a venue that that didn’t approach its 2,200-person capacity, yet John John McClane left everything on the stage. He took no plays off, buzzing from stage right to edge left with grace and power. Watching him perform on this evening brought back the oddly enjoyable sensation of intimidation and inadequacy watching him on the bus in the “Bring the Pain” video did in 1994.

It was worth the price of admission alone.

Filed Under: RZA, We Went there, Wu-Tang Clan