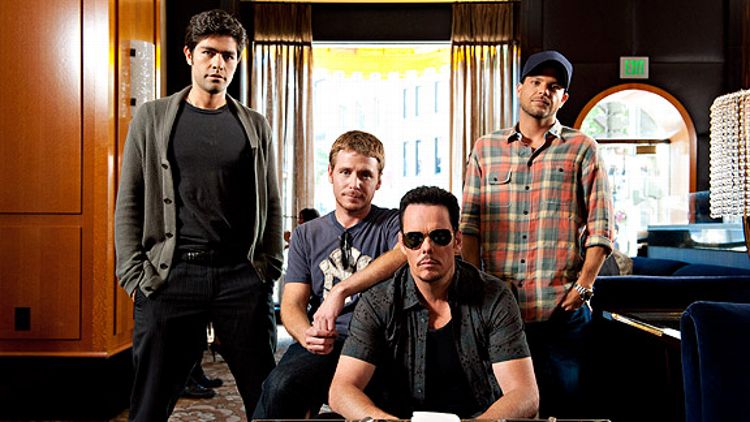 After spending eight seasons with a cast we loved to hate, Entourage is finally over, and the entire nation is searching for meaning in the lives of the individual characters. What can we learn about the human condition from Vinny, Turtle, Drama, E and Ari? More importantly, where will Entourage rate historically amongst the greatest shows in the history of television? The season finale provided closure to an emotional journey that had an appropriately bittersweet ending. [FAKE SPOILER ALERT: Turtle died in a tequila factory explosion.] We will all miss our Turtle.

Wait. Nevermind. It was Entourage. We all knew that the finale was going to be a huge joke, and any attempt to cover emotional ground that any one was expected to authentically empathize with would be impossible. No one will miss Turtle, [REAL SPOILER ALERT] especially now that he is a skinny millionaire.

Season finales of popular shows are always tough to pull off, because a devoted audience expects the writers to give the show a perfect ending — but it also can’t be too perfect because that doesn’t represent ‘real life.’ The finale has to justify the existence of the characters, and also justify the time we wasted watching. Series finales give ‘critics’ the final piece of ammo to identify the flaws in a show and all of the TV-watching losers who loved it for so long.

Remember when the final episode of Seinfeld ‘sucked’? It probably also helps that television shows are no longer regarded as definitive cultural events, because most ‘popular shows’ only dominate a niche market rather than an entire generation. These days, the emotional resonance is determined within a show’s first several seasons.

Entourage existed outside the expectations of most modern TV shows because there were no intellectual or emotional expectations placed upon it. We came, we chilled, we didn’t expect to conquer the human condition vicariously thru the show. It’s over. Entourage’s devoted audience already knew how it was going to turn out. We already agreed that loose ends didn’t have to be tied up to ‘make sense.’

The series finale actually kind of felt like a typical season finale, where the arcs of one season are patched up just to set the stage for the next. After the first episode of Season Eight, we knew where this finale was going to end up. Turtle was searching to justify his own existence. Vincent was searching for self-awareness. E was searching for Sloan. Drama was searching for a reason to live. Ari just wanted his family back. Everything always works out for Vincent Chase and his gang of bros.

[REAL/FAKE SPOILER ALERT: In Eric Murphy’s final scene, he makes the same perturbed, smug face that he made in every scene he was ever in.]

It wasn’t necessarily ‘boring’ or a ‘flop’, it was just one of the ‘formality’ episodes that Entourage has to have in order to tie up some plotlines that mainly served to let the characters ‘be themselves’ while pretending that they might not overcome their conflict. The Entourage episodes we remember are the ones where ‘the wheels come off.’ It probably would have been more ‘memorable’ if Vincent Chase relapsed and had a 15-minute sex scene with Sasha Grey. Or if we just watched Johnny Drama destroy an entire office building while yelling humorous, yet cathartic statements. Or Ari could get mad and say something that ‘you can only say on HBO.’

[FAKE SPOILER ALERT: We find out the name of Ari’s wife is CamelToe McCougar.]

The final season functioned to setup the exploration of a bit too much ’emotional’ space that we knew couldn’t end in a satisfying way. We sort of just watched the show to grin at funny (and sometimes awkward) moments. It became predictable. In a way, the ‘predictability’ factor eventually worked against the show. Any couch of frat bros, snarky bloggers, or satirical feminists could come up with the next 10 seasons of Entourage storylines, and it would probably be just as appealing as what the actual writers would have written. I think that statement is intended to be more of a compliment than a ‘slam’, though. As long as they made Entourage, people were going to watch it.

The finale technically ‘sucked’, but we can always write a few more episodes in our heads that lead to spinoff series’ that we can also write in our heads. We don’t really believe that we are sending the characters to begin a new chapter of their lives’ where they are ‘finally happy.’ Now we can just watch all of these people who pretended to be actors try to extend their careers.

Good luck, Jerry Ferrara. I can’t wait to see you in a movie or obnoxious marketing campaign and think, “You’ll always be Turtle, a-hole! BTW whatever happened to Saigon, bro?”