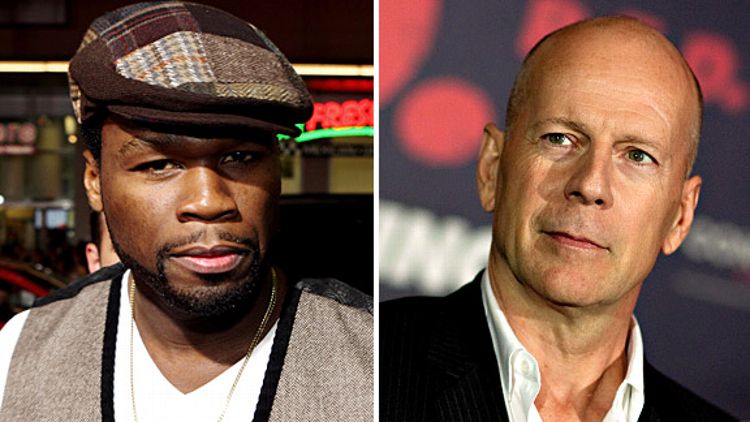 50 Cent’s output in the last few years has been remarkable: While still releasing major-label albums and occasionally acting in studio movies, he’s managed to fund, produce, star, and sometimes even write a steady string of nearly indistinguishable B-movie crime thrillers. But the really amazing thing? The quality of his co-stars. 50 isn’t satisfied playing guns and robbers with guys whose best-known work was a two-episode arc on Party Of Five. Somehow, some way, he lands actors you not only recognize but also might actually like. Set Up, the latest in the 50 Cent assembly line of schlock, arrives on DVD today with both Ryan Philippe and Bruce Willis on its cover. How does 50 pull this off? Below, we look back on his recent filmography and speculate.

Streets of Blood (2008)
In 2008, when 50 kicked off his current streak with this ill-advised post-Katrina corrupt-cop flick, he was only two years removed from Get Rich Or Die Tryin’, a high-profile 8 Mile-style roman à clef directed by the guy who did My Left Foot. Did the weighty subject matter and 50’s then-unestablished reputation for making crap trick co-stars Val Kilmer and Sharon Stone into thinking they were signing on for a normal movie?

Caught In The Crossfire (2010)
For his next casting coup, with the word out about his particular cinematic milieu, 50 Cent had to aim a little lower. Co-star Chris Klein’s star had dimmed since his American Pie days. More importantly, his leaked (possibly fake?) audition tape for Mamma Mia! made everyone think he was crazy. 50 snatched him up when he was at his most vulnerable, then made him say lines like “Let ‘em kill each other, bang bang bang.”

Gun (2010), Blood (2011)
Val Kilmer returned for both of these movies. Why? Okay, yeah, Val’s bank account has seen better days, but he’s not quite at Kleinsian levels of desperation (he just did a movie with Francis Ford Coppola, after all). The only logical explanation, then, is that Val Kilmer really, really likes 50 Cent. Just listen to him describe Curtis to New Mexico Congressman Luciano Varela: “He’s so healthy in his mind and his attitude. And they shot him nine times … Nine! Not twice! He’s bionic. To be around him, he’s got an amazing feeling. Great spirit.”

Set Up (2011)
OK, Val Kilmer, Chris Klein, Sharon Stone — all impressive, in their own ways. But Bruce Willis?! That guy is still legit famous and in demand! He had a hit last year with Red, and is getting paid decent money for roles in Die Hard 5, the G.I. Joe sequel, and next year’s Lay the Favorite, in which he’ll be billed above lots non-terrible actors. So why on earth would he do a 50 Cent movie? Does 50’s Vitamin Water windfall mean he can wildly, wildly overpay Bruce Willis? Ryan Philippe is in Set Up too, probably because he thought he was signing on for a Bruce Willis movie.

Freelancers (Release TBA)
But that’s not all! Currently in some stage of production is Freelancers, a, yep, crime flick starring Oscar winners Robert DeNiro and Forest Whitaker. What was it this time, guys? The money? Curtis’s charisma? Amazing. Simply amazing.