When Yeezus Met Jesus, and Everything Else You Need to Know About the First Night of Kanye West’s Tour 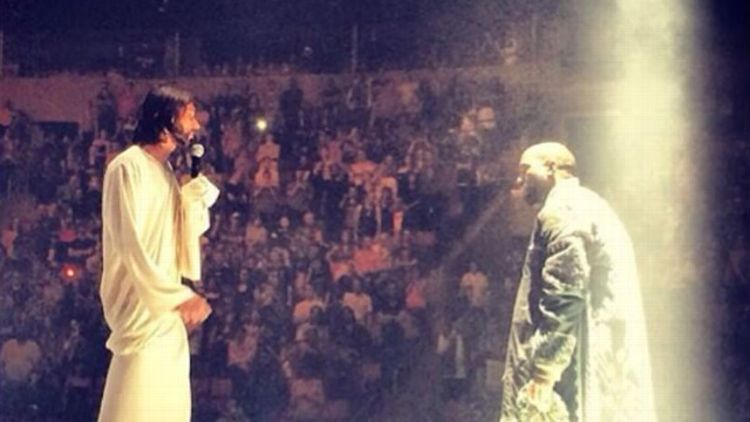 Kanye West’s Yeezus tour is live. It launched Saturday in Seattle, and various corners of the Internet have it pegged as a spectacle gigantic enough to possibly overshadow the Watch the Throne tour in arena hip-hop history. Collected here is a brief dossier to allow you to fool acquaintances into believing you were hard-core enough to fly to Washington state over the weekend for a sold-out concert. Practice in the mirror first.

The tour’s very first moment? A pack of white-robed citizens of Kanye’s imagination bowing down to Yeezus. Then there’s the giant white mountain, the world-size projector screen up above, the fake snowflakes, the yeti. A dozen backup dancers conjure religious imagery throughout the show and call Kanye’s SNL mini-ballet to mind. Christian icon Jesus Christ appears; KW and JC have a chat (“White Jesus, is that you? Oh, shit!”) before “Jesus Walks” kicks in.

TL; DR: Kanye will figure out how to levitate in a beam of light by the end of this tour.

The tour’s merch includes Confederate flag reappropriations and skeletons wearing feather headdresses. Stars-’n’-bars tote bags for everyone! Kanye himself wears a slew of bedazzled masks, plus a lordly robe that put his kilt to shame. Ye changes outfits a bunch, which is good, ’cause the crotch in his pants wasn’t built to last. (Wardrobe malfunctions are not guaranteed for every stop on the tour; Seattle concertgoers, pretend and otherwise, got lucky.) If you’re positive your friends don’t frequent TMZ, you can say you got into KeyArena early and saw Kanye walking around wearing a shirt with the Yeezus logo superimposed on a Playboy photo of Kim Kardashian.

3. Charlie Wilson Is Not in the House for “Bound 2”

Act commensurately sad about this, but feel free to brighten up by mentioning that every Yeezus track did get performed, at least. You wanted to see more Late Registration and College Dropout cuts, but the set was more than two hours long, so you couldn’t really complain. You actually loved it so much you were gonna hop up to Vancouver for a second night, but Kanye canceled it, so you finally had to go home and just do some Netflix.