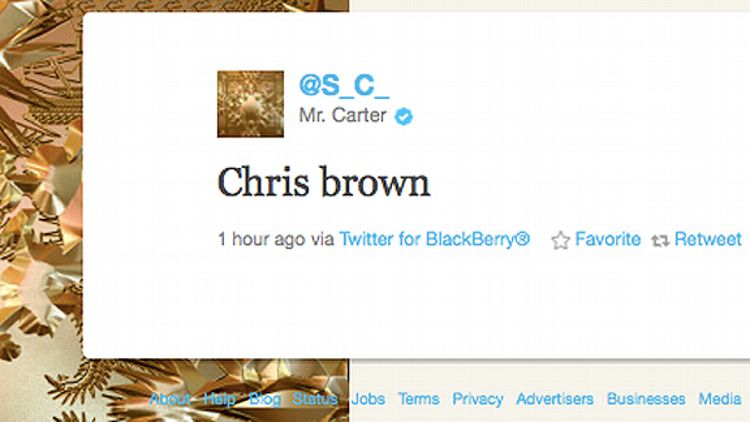 Jay-Z would seem to have many reasons to be happy these days: He and Kanye have the No. 1 album in the country, there likely won’t be an NBA season this year which should cut down on the Nets jokes, and, to top it off, he’s about to become a dad. But there is one small thing that consistently turns Jay’s smile upside-down: Chris Brown.

And why not? Despite some aggressive attempts at image-rehabbing of the sort that would have us remember John Wayne Gacy as a beloved children’s entertainer, the truth remains that Brown is responsible for viciously battering his then-girlfriend Rihanna, a heinous, cowardly act nearly as loathesome as the cultural amnesia that suddenly surrounds it. Thankfully, Jay-Z hasn’t forgotten: Two years after announcing that Brown was “a walking dead man,” Hova treated the crooner as such at last night’s VMAs. After a fevered, ridiculous performance that featured Brown sweating, grinding, and flying through a medley of tunes, both his own and, improbably, Nirvana’s, Jay was the only celeb who greeted Brown in the manner he deserved: with a contempuous shrug. (Actually, it was worse/better than that: While noted believer-in-second-chances Kanye whooped and hollered, the elder cushion of the Throne remained seated, more interested in the condensation beads on his vodka than what was happening onstage.)

Today things seem to have escalated further with the sending (and subsequent deleting) of a mysterious tweet. At 2:10 EST, Jay hit send on a missive reading simply “Chris Brown.” Now, it’s possible we’re reading too much into this — Hov’s Twitter feed is often hard to distinguish from OldManSearch’s. (Jay-Z might be a business, man, but he’s also a 41-year old who occasionally confuses Twitter with a Google Map search bar.) But after careful minutes of consideration, it seems there are only two possible explanations for what happened here.

We’re fairly confident which one of those accidentally public DMs is more likely. In other words, RIP Chris Brown! Let’s hope Kurt Cobain is sneeringly ignoring you in heaven.

Justin Bieber Covers Drake, Grows Up Right Before Our Eyes