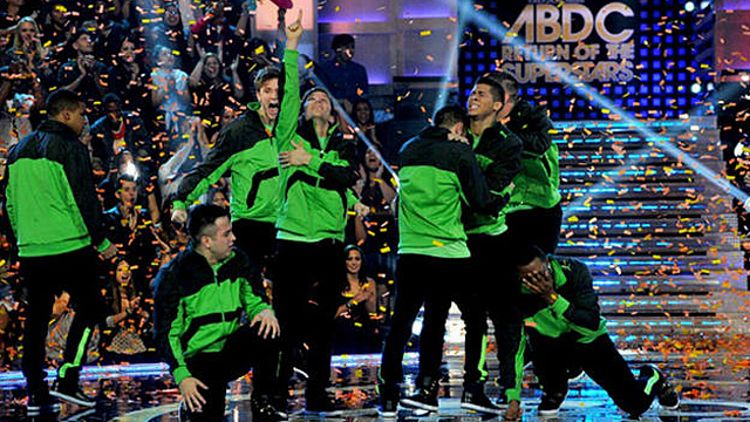 We’re about 20 feet away from the doors of Stage 29 on the Warner Bros. lot that we start to hear the screams. We’re late — a 6:30 check-in time does not generally agree with Los Angeles rush-hour traffic — and the live finale of Season 7 of America’s Best Dance Crew begins at 7 p.m. on the dot. “This is live TV people, live TV!” stagehands bark as they usher the few remaining stragglers into the sound stage — barely allowing a millisecond to stop and take a phone pic of producer Randy Jackson, who’s still hanging outside with his posse. (The show’s full title is Randy Jackson Presents America’s Best Dance Crew, which makes it pretty troublesome to tag on Facebook.)

Oh right — some background: Randy Jackson Presents America’s Best Dance Crew is a reality dance competition show on MTV, and last night it crowned Arizona underdogs Elektrolytes as its Season 7 winners. Its Nielsen averages hover around 1 million viewers per week, but it’s the kind of show where that number is probably doubled by online views and YouTube rips. I’ve written elsewhere about how ABDC is the last show on MTV to actually have something to say about how young people relate to pop music; but beyond that, it’s probably the only show on MTV that someone over 30 could watch and not be completely convinced that the younger generation is doing naught but impregnating each other and punching each other in the crotch. (Oddly contradictory activities, but OK, MTV!)

One other bit of background info: I am not a hip-hop dancer, nor a hip-hop dance expert. This has not stopped me from trying, but I can’t even Dougie.

Lots of people (myself included) wryly refer to other reality competitions as “their sports,” but ABDC — on TV, but even more so in person — actually resembles an athletic event above anything else. As a publicist ushers my friend and me behind the stands that surround the circular stage, the thumping, crowd-amping music and cheers become so loud that it’s impossible for us to do anything other than exchange eyebrows-lifted “this is it!” looks. I think back to the first time my mom ever took me to a Mariners game when I was growing up in Seattle — the collected excited energy of thousands of people was palpable even before I stepped out under the roof of the Kingdome for the first time (for historical reference for this memory, see “Kingdome” and “collected excited energy.”)

This is not my first time seeing ABDC live: That would have been a few weeks ago, when I almost had a joy-triggered nervous breakdown during an impromptu dance-off between two crews during a break. Have you ever been so happy that you felt like your brain would burst from positive information overload? Without the assistance of drugs, alcohol, or a sexy dude or lady? That is pretty much what happened to me last time I was in these stands. It was going to be a hard feeling to top, but I wasn’t really looking to do that this time around — I just wanted to see what has been an excellent season in person. I didn’t even really have a horse in the race; I would have been just as happy if miniature girl group 8 Flavahz ended up taking the $100K. Mostly I just wanted to bask in the positive vibes and enjoy the scene.

ABDC is the closest to the major leagues that the world of competitive hip-hop dance gets. But there are stars here whose following extend far beyond what you see on MTV — sure, first-season winners Jabbawockeez enjoyed breakout success after their electrifying run on the show (and set a precedent that arguably has yet to be beaten), but as I was sitting on the bleachers and tweeting pics of judge Lil’ Mama’s footwear, a nearby group of kids nervously approached Hero McRae, whose crew, Season 4 winners We Are Heroes, came back to perform on tonight’s finale. “They’re your biggest fans,” said the adult chaperoning them. As talented as McRae is, even a die-hard fan like me finds it difficult to keep the individual dancers straight (I mostly remember her for her short but impactful So You Think You Can Dance run last season.) But that’s because I’m not looking up these dancers and crews every day on YouTube, subscribing to their feeds, and watching every new homemade video and passing them around to my friends — and that’s where the majority of this scene is taking place.

So, OK, as a viewing experience, ABDC may be more Step Up 2: The Streets than Rize — a glossier, watered-down vision of hip-hop dance with a forced narrative. (For the record, both films are excellent in surprisingly similar ways.) But unlike the way most singing competitions mold a human pursuit to fit a network’s formula, very little of the original core spirit is lost in Dance Crew. Stage hands pass out “homemade” signs to the crowd just like they do on Idol, but just as many kids bring their own glitter-and-poster-board creations. The crowd-work guy sounds like he’d possibly be more thrilled with the night shift at an AM/PM, but it doesn’t matter because the audience’s excitement is nearly impossible to repress. And for once, as the “old” in the crowd, I wasn’t looking around thinking that this was fun but paled in comparison to what I lined up and screamed for when I was 16. I was thinking that in an age where following reality television usually precludes some desire to revel in the flames of a burning civilization, it was nice to just watch something purely positive. And to be 30 feet away while this is happening:

Emily Yoshida is an editor at Grantland, and has the release date for Step Up: Revolution marked on her calendar (July 27).