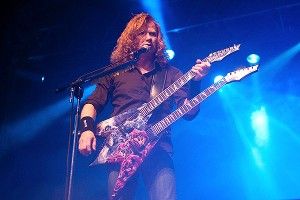 “I’m just hoping that whatever is in the White House next year is a Republican. I can’t bear to watch what’s happened to our great country. Everybody’s got their head in the sand. Everybody in the industry is like, ‘Oh, Obama’s doing such a great job …’ I don’t think so. Not from what I see.”

“Earlier in the election, I was completely oblivious as to who Rick Santorum was, but when the dude went home to be with his daughter when she was sick, that was very commendable. Also, just watching how he hasn’t gotten into doing these horrible, horrible attack ads like Mitt Romney’s done against Newt Gingrich, and then the volume at which Newt has gone back at Romney … you know, I think Santorum has some presidential qualities, and I’m hoping that if it does come down to it, we’ll see a Republican in the White House … and that it’s Rick Santorum.” — Megadeth front man Dave Mustaine, to MusicRadar.com. [h/t TPM]

It’s not our business to mock someone’s political beliefs, even when confronted by 100 blog headlines blaring away in gape-mouthed shock. That Being Said, this is perhaps the least metal thing that has ever happened. This is a good 67 percent less metal than Metallica cutting their hair, 42 percent less metal than watching Metallica in group therapy*, and 21 percent less metal than Lars Ulrich whining about Napster. This is so unmetal that a bummed out King Diamond feels like he’s just going to spend the day humming some Barry White songs while wistfully cranking a salad spinner. This is Rob Halford in a taupe Polo shirt and slip-on loafers, Bruce Dickinson out for a leisurely afternoon at American Girl Place with his nieces, a bunch of Norwegian black-metallers getting together to throw a church raising. You know what? We have to stop this before we begin thinking about Lemmy sitting in a Beverly Hills cosmetic surgeon’s office for a consultation about having his mole lasered off.

[*Which, in fairness, was fucking enthralling, but no, not very metal at all.]