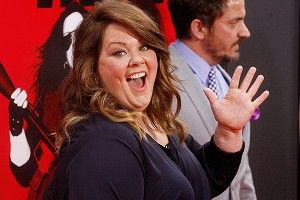 This weekend, all humans lost to the monsters. Pixar’s Monsters University, the sequel to Monsters, Inc., took the top box office spot for the second straight week with $46.2 million, good for an overall international haul of — oh, wow, dude — more than $300 million already. But all the box-office analysts wanted to talk about was The Heat. Continuing in the victorious tradition of its namesakes — which features such predecessor titans as the two-time defending NBA champion Miami Heat, Val Kilmer shoot-’em-up classic Heat, and the meteorological phenomenon of hot-but-in-a-good-way-like-let’s-all-go-to-the-beach-not-let’s-all-die-of-heatstroke weather — Melissa McCarthy and Sandra Bullock’s buddy-cop movie outperformed expectations to take the second spot. And more importantly, to knock that pretty-boy Channing Tatum right on his back.

The Heat managed a hearty $40 million in its opening frame, which means it’s on track to keep McCarthy’s hot streak — kicked off, of course, with Bridesmaids and continued apace with Identity Thief ($135 million in the bank, son) — alive. [Air horn.] [Confetti-gun blast.] [Air horn.] Melissa McCarthy is a movie star, ya’ll.

Meanwhile, Tatum’s White House Down did only $25.7 million, good for fourth place (World War Z snagged third with $29.8 million). Now that might yet see an uptick, with Rotten Tomatoes saying 73 percent of audiences dug seeing Chan save President Jamie Foxx’s hide. But even if it doesn’t ever bounce back, it won’t change much: Tatum has become a national treasure, and one softly performing blockbuster won’t drop him down to earth quite yet. That said, Tatum couldn’t go wrong trying to get a meeting with McCarthy, and soon. As we’ve seen so far, getting Grandmaster Melle Mel to star in your flick — maybe McCarthy can play a seedy strip club owner in Magic Mike 2?! — only means money gets stacked.