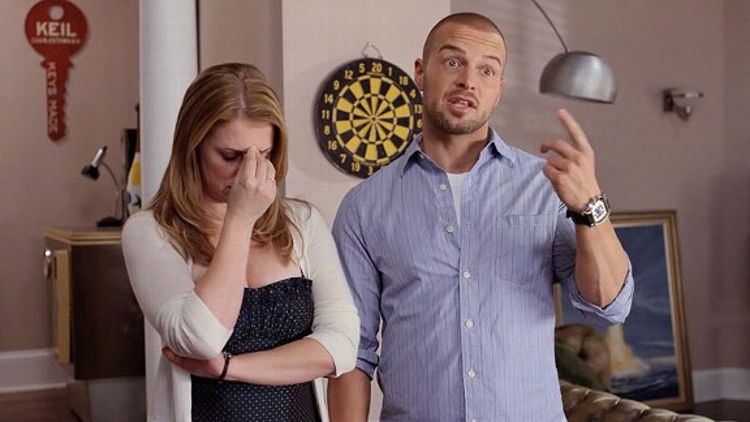 Each week, Netflix Watch Instantly adds hundreds of new titles. Four or five are movies you want to watch, some are bad TV shows or camp classics, and most make no sense at all. Those in the latter category are puzzling: not bad Enough to be good and certainly not good enough to be interesting. In this column, comedian Max Silvestri will review a new film on Netflix Watch Instantly and ask, what is this?

What It’s About: Two misanthropes stage a sham wedding in order to grift money and presents off everyone who has ever cared for them.

Who It’s For: Men and women who hate either women or men. Melissa & Joey completists.

“Not another wedding!” This is the auspicious first line of dialogue in My Fake Fiancé, which should really be called We Are Both Fake Fiancés. I presume the reason it’s not called that is because our society is not ready for the plural of the word fiancé. Or maybe because the title, like everything else in this film, was given only passing thought, the seeming product of an all-night don’t-lift-your-pencils free-write with an attitude of outright disgust toward revision, logic or likeability. (I imagine many of the things I’ll write about in this column will have a similar vibe, so I should probably make peace with it soon.)

The film tells the story of Jennifer (Melissa Joan Hart) and Vince (Joey Lawrence), two self-loathing pieces of garbage who get seated next to each other at a mutual friend’s wedding. Jennifer hates men, weddings, and herself. Before Vince finishes saying “hello,”, she spews bile at him: “Let me guess: you lease a really nice car you could never afford to buy, you don’t cry in movies, and you only bang hot chicks.” Is that a type of person we all hate? Reserved, financially over-extended guys with high standards? Then she berates him for wearing a stained shirt and accuses him of “going commando,” because he wouldn’t “want the boys to get twisted up.”

I was on Vince’s side, but then he stands up uncomfortably close to Jennifer’s face, puts his hand on his pants’ zipper, and snarls, “Want me to show you?” Yeah, you show her, Vince. He gets a phone call from his mobster bookie, named the Monkey, to whom he is dangerously in debt. Oh, he is a gambling addict! These two are delights. How lucky that they’ve found each other. (Or unlucky? The couple, who we all know will end up together, will presumably breed and pass down their brutally unhappy genes.)

Despite being two islands of misery in a sea of joy and celebration, what catches Jennifer and Vince’s eyes at the wedding is not the warm glow of love but the gifts. Vince sees the groom handed a fat envelope of cash, and Melissa watches as the bride is lifted up into the air as people pin dollar bills on her dress. (Is that a thing? It’s treated like it’s a normal thing in this movie and it makes me uncomfortable.) Vince and Jennifer commiserate and realize they’ve each probably spent around ten grand going to weddings. That’s a high number any way you do the math, but especially when you consider that neither Jennifer nor Vince seem to have friends. At one point, Vince claims he does have a few friends but he can’t call them because he owes them money. Who is inviting these two to weddings?

Soon after, Jennifer moves out of her house. “Seven years, three boyfriends, four crash diets.” Four crash diets!? Laaaaa-dies! Jennifer has finally bought her own place, but seconds after she packs all of her possessions into a moving truck, someone steals the truck. All her possessions! She’s got a brand new house but no money to buy things for it. (She must have been projecting when she accused Vince of over-extending himself.) Meanwhile, the Monkey’s goons threaten to kill Vince if he doesn’t pay.

Somehow, these two reconnect and decide that a fake wedding, despite their mutual disgust for one another (and everyone else on the planet), is the best way to load up on cash and kitchenware. So begins the movie-long process of these two deceiving their families and friends about their relationship. Charming. Jennifer even consults some kind of wedding-etiquette book to see what the established protocol is on keeping gifts when an engagement gets called off or a groom is left at the altar. Oh shoot, they have to go through with it to keep the presents. Will society cut them no breaks?

They begin cohabiting in her empty house to really sell their big lie, and Vince moves in with his own furniture. (He’s got very “guy” furniture. For example, there is a toy shopping cart full of sports balls in the bedroom. Sports balls!) To save time, each agrees to write the other’s vows, but that is complicated by how much they dislike one another, which is very symbolic of this movie on the whole. All of Jennifer’s dialogue seems written by a man who hates women, and all of Vince’s dialogue seems written by a woman who hates men. So much hate! Jennifer is a mean-spirited shrew, and Vince is a penis with eyebrows.

Naturally, these two fall in love in the following scenes:

Love! After Jennifer’s nephew says, “Oh, we’re not going to college. We heard Grandpa say that he’s spending our college fund on your wedding,” Jennifer almost calls the wedding off. But Vince reconnects with his deadbeat gambler dad and takes his pony winnings off him to pay for the wedding. Phew. For a second there I thought there might not be a terrible sham wedding.

The big day comes, and these two continue to not come clean. The reverend in his speech calls marriage, I swear to God, “an excruciating journey,” which is a very apt description of this movie. Vince starts to read the vows Jennifer wrote for him, but he throws them out and speaks from the heart. He proceeds to say vows like one of those terrible wedding toasts by a drunk member of the wedding party where he thinks his toast is a charming journey through the past with a heartwarming twist, when really it’s nine minutes of stories about how the groom used to get blackout drunk and bring home disgusting trim in college, and one minute of “and then he met the bride and I could tell he’d found the real thing.” Vince lists all the ways Jennifer is terrible, and then says, “but I fell in love with your basic sense of decency.” What! What? You are saying this, in a house of God, in front of every single person you’ve ever met and tricked into having a fondness for you, you sociopath. What sense of decency? You are doing this for presents.

The ending of the movie is not Vince and Jennifer bravely calling the whole thing off; instead it’s them going through with the wedding but for slightly better reasons (gifts AND love). The Monkey, who earlier threatened them both with a gun but in a funny way, offers to go easy on the interest on Vince’s loan. It ends with them dancing, but with the unspoken hope/promise that Vince slides back into his gambling ways and the Monkey murders them both in their bed.

When You Should Watch This Movie: As it was made for ABC Family, this is an ideal movie to watch with your whole family if you’ve been lying to them about something huge but haven’t found a way to tell them yet. Maybe you’ve been spending their checks for grad school on Ecstasy? Whatever your bad news, it won’t be as bad as this movie.