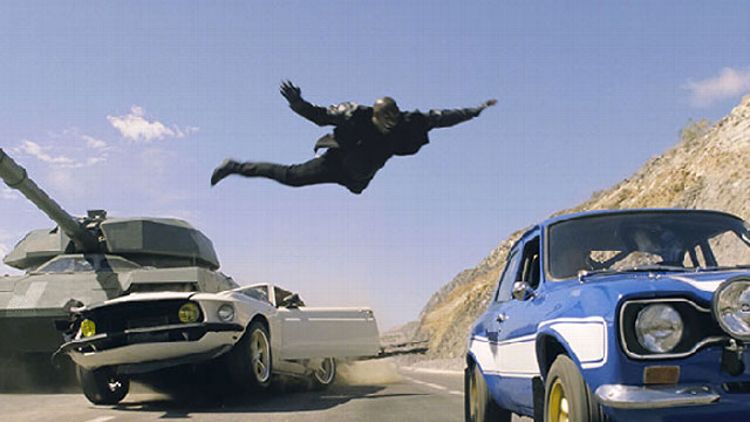 More so even than other action franchises — and trust me, I have watched a bunch — the individual installments of the Fast & Furious franchise really run together. When the on demand/DVD ads for it started running last week, I had to ask my husband whether we’d actually seen it. (We had, but it was in a hotel room over Labor Day weekend, meaning that I almost certainly fell asleep.)

In case you are also hazy on whether this one escaped your notice: It’s the one where The Rock gets the car-thieving crew back together to help him try to take down an even worse bunch of villains, led by Luke Evans. It’s also the one where we discover that Vin Diesel’s old girlfriend Michelle Rodriguez totally did NOT die in an earlier movie, and that she has fallen in with this other bad guy. Later (as seen in the trailer), cars drive faster than planes. Sure? Anyway: If this is the kind of movie you’re in the mood for, it’s a decent if not especially memorable example of the genre.

In addition to making the first five films of the F&F franchise available to rent again, Time Warner has also marked the recent death of its star, Paul Walker, with a collection of his films, including Varsity Blues, Eight Below, The Skulls, Running Scared, Joy Ride, Into The Blue, and more.

Alex Pappademas: “As a rule the scenes where characters feel feelings are deathly. We’re supposed to have developed an emotional attachment to these wisecracking crash-test dummies over the course of the last 12 years; I’m not there yet, but your mileage may vary.”

Battle of the Year

Regular readers of this column and/or my Twitter feed will know that I am a devoted partisan of dance movies, so when I learned that this one existed, I convinced a friend — with whom I have seen all the Step Up movies — that we should see Battle of the Year instead of Enough Said. She agreed readily enough (did I mention that she planned a visit to New York from Los Angeles to coincide with the release of Step Up 3D so we could see it together?), but I think I technically still haven’t finished apologizing.

Guys, Battle of the Year is NOT GOOD. They throw you Josh Holloway as a grown-up ex-B-boy turned dance crew coach, and then they never have him dance. They write a part for an awkward nerd working at a hip-hop record label, and then they have Josh Peck play him like he’s the coolest guy around. Worst of all, there’s hardly any dancing, and what you do see is lousy with cuts. If you really love dance movies, I implore you, do not watch this one, because it will bum you out. Director Benson Lee also directed the documentary Planet B-Boy. It’s on iTunes; watch that instead.

If Hannibal put you all the way on the Mads Mikkelsen bandwagon, The Hunt can get you your fix before the series comes back to NBC next year … though it will show you pretty much exactly the opposite side of the actor you love.

Thomas Vinterberg (The Celebration) directs this feature, which finds Mikkelsen playing a teacher falsely accused of molesting a student. As he tries (apparently in vain) to prove his innocence, the community turns against him and his life falls apart. Uh … happy holidays?

In recent years, playwright/provocateur Neil LaBute has directed films that are either based on scripts with which he hasn’t been involved at all (like Lakeview Terrace and the American remake of Death at a Funeral) or that he has adapted from existing material (like his 2006 remake of The Wicker Man). Some may have feared that the man behind divisive (i.e., misogynistic) films like In the Company of Men or The Shape of Things wasn’t even angry at women anymore, and if you are among those LaBute fans, Some Velvet Morning may be just the ticket.

Available the same day as its theatrical release, Some Velvet Morning finds LaBute once again directing his own original script, and returns him to his sweet (sour) spot: an emotionally fraught confrontation between a man (Stanley Tucci) and his long-ago mistress (Alice Eve). He has come to tell this lady, Velvet, that he has finally left his wife for her … but has he? And does she still want him if he has? And how unbalanced will the sexual politics be?