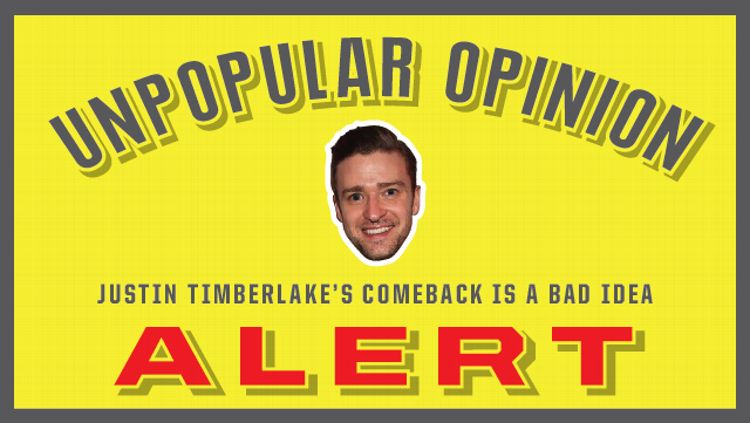 It has been 2,342 days since Justin Timberlake released FutureSex/LoveSounds. There’s a case for it as the century’s best album. It’s of its time (Three 6 Mafia cameos, beloved Timbaland productions, that horrifying faux-futurism title) and it lives beyond. In the terrifying world of nightmarish wedding DJ scenarios, there are three Timberlake songs any guest can rely on: “SexyBack,” an embarrassing but OK, let’s go dance staple; “My Love,” which goes hard forevermore; and “Until the End of Time,” a sleeper slow dance favorite. There are not many millennial jams you’ll hear at a bad wedding that won’t make you want to renounce the day’s holy congregation. But these three songs are probably wedged into the musical consciousness for at least another 10 years.

It’s not a perfect album, but upon its release FutureSex was a true event — maybe the last one. Our least embarrassing boy band veteran firmly grasping solo stardom, with auteur instincts and inspired collaboration. That’s how the great ones did it. Barring perhaps Taylor Swift (who is unbearable) and Adele, there hasn’t been a pop star who combines critical acclaim — some grudging, others drooling — with commercial success. The album has sold more than eight million copies worldwide. But arguably more important than that is the sweeping influence it carries with a specific generation. For a huge swath of under-28 Americans on the Internet — essentially anyone still in college when the album dropped — Justin Timberlake is unimpeachable. These are people that drank, danced, and got laid to this record. (People now older than 28 definitely did this to FutureSex, too, but as those now 28-and-olders will likely tell you, drinking, dancing, and getting laid after college is often a more treacherous venture.)

As time passes, FutureSex grows in estimation. A generation swoons for Timberlake despite several (several!) terrible film roles. Here’s a list of the charting songs J.T. has appeared on since FutureSex was released.

• The Lonely Island featuring Justin Timberlake, “Dick in a Box”

• Timbaland featuring Nelly Furtado and Justin Timberlake, “Give It to Me”

So those are not good songs. And save “Dick in a Box” — great, hilarious, the birth-child of some delightful Halloween costumes — none of them bear cultural resonance. Some are leftovers repurposed by the flagging Timbaland machine, while others are favors for labelmates and floundering friends. Unlisted, uncharting collaborators include Duran Duran, Talib Kweli, Kenna, Matt Morris, and Macy Gray. And here’s a secret: Justin Timberlake, despite that one sterling statue on his mantle, does not protect his brand. This is something that has gotten lost lately. Because in the nearly six-and-a-half years since the album, a hunger has grown in the bellies of that adoring generation. J.T. is a fucking legend, you guys is the kind of thing you’ll hear. The evidence is all over thousands of pleading Tumblr posts, but Nikki Glaser and Sara Schaefer, the hosts of MTV’s first stab at late-night Nikki & Sara Live, were there early. The then-aspiring comedy duo essentially got their break by begging Justin Timberlake to make music again with “Justin Timberlake, Make Music Again.”

Then the dominoes began to tumble, and that generation began to work in unison. There were petitions and Facebook pages and delightful news stories involving Drake. In the meantime, Timberlake studiously avoided the possibility of music. He endorsed Sony products, Audi, Givenchy cologne, and Callaway Golf; hosted Saturday Night Live three times; worked on his clothing line, William Rast; opened a series of BBQ restaurants; played a lot of golf; filmed 13 movies (only one watchable, The Social Network); and married Jessica Biel. That’s a full life. All that golf time sounds awesome, frankly. But in ducking the music question — whether out of fear or sheer disinterest — Timberlake’s aura grew. His stature, not just as an entertainer but as a musician, began to overwhelm his ability. FutureSex is a truly great album, but its burden began to weigh heavily. And there was something fantastic about the way he rarely acknowledged that fact. Music has its share of reclusive geniuses, from Sly Stone to Jeff Mangum to Jandek. But Timberlake was not like them. He was living publicly and ostentatiously and rejecting music. And that was a glorious dick move with no precedent.

“For me, personally, when I do sit down and decide to do it, it’s just a special thing,” he told the Associated Press just last fall. And though whispers that he’d debuted music at his wedding to Biel in October grew louder, there was no assurance that anything was imminent, let alone real or interesting. Then came the countdown clock. And the languid and uninspiring new single, “Suit & Tie.” And then the literal cover for his new album, The 20/20 Experience, accompanied by the goofy track list (“Spaceship Coupe,” “Strawberry Bubblegum”). And then the realization that not many people are saying This isn’t going well so far. On Sunday night, he’ll play the Grammys, his first mass audience musical performance in years. Now Timberlake, a world-class showman, is one of those celebrities who is very easy to like — he merges knowing a-hole fameball with sarcastic backward-cap frat-bro in the most charming and empathetic manner imaginable. In other words, he’s good at being famous. If early responses to his Super Bowl weekend performance are any indication, people are ready for this. They want this. They need this.

This is all a mistake. Timberlake has almost nothing to gain from this comeback. He doesn’t need the credibility. He doesn’t need the clout. He doesn’t need the money. He doesn’t need the adoration. What a missed opportunity; what a magical prank it would have been for him to simply walk away from music, dodging questions into eternity while occasionally mentioning how “special” it is to him. You know what’s not special? These lyrics: “I can’t wait ’til I get you on the floor, good-looking / Going out so hot, just like an oven.” Also not special: “Stop, let me get a good look at it / Oooh, so thick, I know why they call it a fatty.” Justin Timberlake is not an artist with much use for lyrics. But a new song does not allow anyone to ignore that. This is how legends are built. Ask Terrence Malick or Stanley Kubrick what (more than) a few years off did for their reputation. You’re only as good as your last masterpiece. And so let’s say The 20/20 Experience is released on March 19 and does not meet expectations — which, in this case, requires 10 orgasmically sequenced songs plus the formula for cold fusion in the liners. And so then everyone begging and pleading for a new J.T. album will have to reconcile their disappointment. Then this cycle will turn over for a new generation — I can see the Bieber-comeback-in-2017 campaign in clear view. But for Timberlake, and the begging generation, will all of this have been worth it? Sometimes nostalgia is better left in the past.