Two-Headed Boys: Falling In and Out of Love With Neutral Milk Hotel 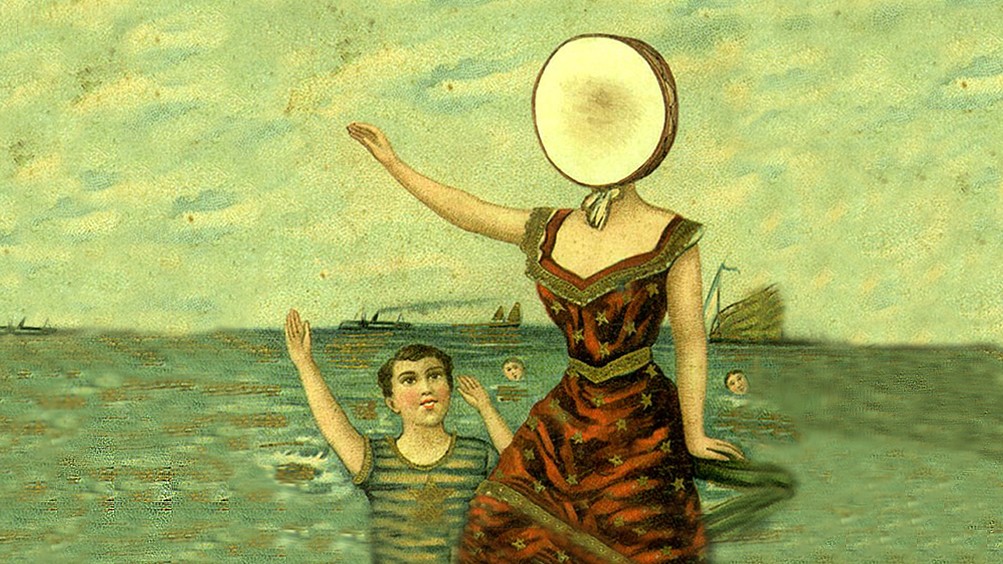 One of the most incredible concertgoing experiences of my life occurred two years ago this week, when I saw Jeff Mangum perform a solo acoustic show at the Pabst Theater in Milwaukee. If you happen to be partial to ’90s indie rock, Mangum requires no introduction. For everybody else: Mangum is the famously reclusive singer-songwriter for the seminal kitchen-sink psych-folk group Neutral Milk Hotel, whose 1998 album, In the Aeroplane Over the Sea, is considered to be an epochal work of the genre. After the support tour for Aeroplane ended, Mangum disappeared from public view, thereafter declining all interview requests (save for one from Pitchfork in 2002) and releasing only a record of field recordings from a Bulgarian folk festival and a 2011 single, “Little Birds,” which for now represents the only new Neutral Milk Hotel music since the late ’90s.

In the Pitchfork interview, Mangum hinted at a recent nervous breakdown and feelings of disillusionment with the minor fame that Aeroplane had bestowed on him in indie circles. There were rumors that he had been abnormally preoccupied with Y2K and presently spent his days padding around the house, doing nothing, like a lo-fi Brian Wilson. He’d pop up occasionally to host a radio show on the New Jersey free-form radio station WFMU or do cameos at his friends’ concerts. But otherwise, Mangum appeared committed to dutifully living the life of an enigmatic cult figure.

Was there a heavy dose of romantic “loner genius” hokum embedded into Mangum’s image? Of course. But that hokum sure worked like gangbusters. In Mangum’s absence, Aeroplane became a principal touchstone for MOR ’00s indie bands — the eclectic instrumentation, fanciful lyrics, and Mangum’s emotional, near-operatic vocals influenced everyone from the Decemberists to Grizzly Bear to Arcade Fire, who wound up signing to venerable indie label Merge because it originally released NMH’s albums. Music writers also came to embrace Aeroplane as a sacred totem, gradually transforming what had initially been a mixed critical reception into a chorus of platitudes. After giving Aeroplane a strong but hardly earth-shattering score of 8.7 upon its release in 1998, Pitchfork granted the 2005 reissue a perfect 10.0. Rolling Stone upgraded its rating from three stars in ’98 to four stars in the 2004 edition of its record guide. In 2003, Magnet magazine declared Aeroplane the best album of the previous 10 years, beating out records like Nirvana’s In Utero and Radiohead’s OK Computer.

While Mangum never wrote a song that penetrated the popular consciousness, he became an unofficial mascot for a bygone era of difficult yet catchy underground music that was just too aesthetically “pure” and “authentic” for the mainstream. Like all mascots, “Jeff Mangum” was an avatar for a real-life though significantly less cuddly living thing.

Released just before the Internet changed how people heard and processed this kind of music forever, In the Aeroplane Over the Sea was a record people could believe belonged to them and no one else, and it subsequently forged a deep spiritual connection with a small but passionate cadre of obsessives. (How perfect that April Ludgate, the misanthropic pixie dream girl played by Aubrey Plaza on Parks and Recreation, was revealed to be a Neutral Milk Hotel fan.) The album’s unsettling juxtapositions — pitting Mangum’s childlike fascination with Anne Frank against the nightmarish imagery of his lyrics, the simplicity of the melodies against the grandiosity of the pocket-symphony arrangements, and the overall fussiness of the studiously slapdash production — have since become indie clichés, but at the time they made Aeroplane a singular statement. That Mangum couldn’t muster a follow-up only seemed to underline Aeroplane’s uniqueness. “The Salinger of indie rock,” was how Slate described Mangum in 2008, when it appeared he might never step down from whatever cloud he was floating on.

Three years later, Mangum finally did emerge to play his first concerts in many years. The shows, predictably, were instant sellouts and garnered rapturous reviews. But when I finally saw Mangum, what blew me away wasn’t so much the man onstage as the audience. As a reporter, I’ve covered concerts by Britney Spears and the Backstreet Boys when they were at their turn-of-the-century peaks in popularity. And while those crowds were intensely worshipful, they had nothing on the evangelical enthusiasm of Neutral Milk Hotel fans. I don’t think I’ve ever stood in a crowd of people that was more deferential and adoring. (If you’re familiar with Dashboard Confessional’s early-’00s MTV Unplugged special, it was like that, except older and more bearded.) It was frankly astonishing. I considered myself a fan of Mangum’s music, but I instantly realized that I didn’t like it enough to fit in comfortably with this crowd. I was a dabbler in a sea of true believers. You could tell people were proclaiming what had been a deeply personal part of their lives publicly for the first time. When they shouted the words to songs from Aeroplane back at the guy who wrote them, it seemed like it was more cathartic for them than it was for Mangum.

As for me, seeing Mangum live had a much different effect. It actually made me like Aeroplane less. I noticed that my attraction to these songs had more to do with Mangum’s feral intensity on the record (and what I had inferred, perhaps mistakenly, from that intensity) than the actual songwriting. Take “Oh Comely,” perhaps Aeroplane’s most beautiful track. The lyrics involve a Grimms’ fairy-tale-type narrative about a pair of Siamese twins who are freezing to death in the woods. The way Mangum sings it on Aeroplane makes you feel like his heart has been set ablaze like a funeral pyre while still inside his chest. Listening to it on headphones or alone in the car while driving in the middle of the night heightens the sensation that you are listening to a man experiencing a vividly painful reckoning.

Then there was the aforementioned hokum. It had really done a number on me. The fact that Mangum didn’t make another record after Aeroplane seemed to support the idea that he had irrevocably damaged his nervous system to achieve the album’s singular mood of whimsical despair. That’s what I had bought into, anyway.

Of course it was good that this wasn’t true, and that Mangum had survived his period in the wilderness and now appeared to enjoy playing for his fans. I was still hung up on a juvenile fantasy from my college years. That was on me, not Mangum. Nevertheless, the spell was broken. When I saw Mangum play “Oh Comely” in person, it was good … but not quite the same. The eccentric, hermetic otherness that sucked me into the record mattered in ways I didn’t fully comprehend until this mystical quality dissipated and was replaced by professional concert-performer competence. Without the mystery, Aeroplane seemed merely like a very good ’90s indie-rock record that I never feel like putting on anymore.

Still, I was glad I saw him. At the time, it was reasonable to think Mangum might not come through my area again. But here we are, two years later, and Mangum is still playing songs from In the Aeroplane Over the Sea for aging indie rockers and the youngsters who never got to see him the first time (or were too slow on the draw for the first round of “post-hiatus” gigs). And now he’s back in my neck of the woods again, with shows in nearby Chicago and Madison this week. This time, Mangum is accompanied by the reunited Neutral Milk Hotel, who I’m sure will improve on the rather shopworn presentation of his evocative but samey-sounding songs from the solo tour. Neutral Milk Hotel has already been on the road for three months and is set to play dates around the world until the middle of August. The band has promised that the round of shows the East Coast has will be the last in the region “for the foreseeable future.” But that doesn’t preclude Mangum from doing another solo tour.

At this point, Neutral Milk Hotel has basically become the Pixies 2.0. Like NMH, the Pixies went away right before their influence trickled down to younger and subsequently more successful bands. The Pixies’ reunion in 2004 was a cause for celebration. And then the reunion went on. And on. Now it’s 10 years later, and the Pixies are still touring in spite of releasing a grand total of two EPs’ worth of new material. And for some people at least, that spell has been broken, too.

Now, I don’t particularly care if Mangum and his bandmates do another 10 years of reunion tours. If there are people willing to pay to see them, God bless. I’m happy that anybody is getting paid to play music in 2014, so good on Mangum for finding a way to profit off the mystique he built in the late ’90s and ’00s. I personally witnessed the outpouring of love people have for his songs, and the opportunity for fans to express that affection in a communal setting is no less valid now than it was in 2012 or 1998.

But after witnessing Mangum for myself, I find that the old loner-genius stuff doesn’t translate like it once did. I don’t think it’s a coincidence that Neutral Milk Hotel’s return has coincided with the waning of Aeroplane’s influence. You just don’t hear young bands trying to recapture what Mangum created so many years ago. It’s been left now to the originators to revive themselves.

For the children of ’80s and ’90s indie (or “college”) rock, who grew up mocking their parents for never letting go of their hippie-era favorites, it can be strange to recognize that Gen Xers are now major drivers of the nostalgia economy. The rest of the world has moved on. I think I’m going to join them.