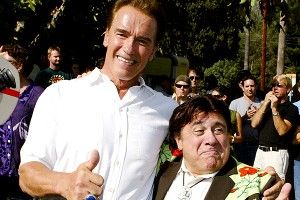 In 1988, an unlikely comedy hit was born out of the concept of Arnold Schwarzenegger and Danny DeVito being twin brothers. Because they don’t look anything alike! One is so small and one is so big! In the movie Arnold was the genius polymath and Danny the slick street dude in debt to shady dudes, and they’re more or less created by scientists and then separated at birth. You’d think the powers that be would feel content having, against all odds, pulled out a highly enjoyable, highly convoluted “twin brothers birthed via diabolical science experiment” once. But, oh no: a Twins sequel called Triplets is now in the works. And the third brother is — oh yes — Eddie Murphy.

In this one, the twins find out that a third brother was conceived way back when; presumably, the trio reconnect, and set off on a series of criminal hijinks. I honestly can’t tell: is this the dumbest thing you’ve ever heard, or is it genius? And what’s Eddie’s character’s back story going to be? Hopefully he’ll have been a once hugely succesful comedian turned family-friendly actor turned semi-recluse. Anyway: the Eddie Murphy comeback is back on!