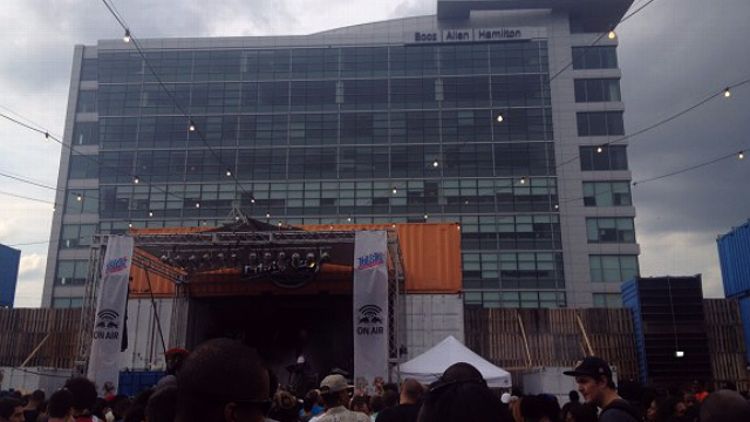 Pictured, from front to rear:

This is the perfect way to start discussing what is happening in the music scene of the nation’s capital in 2012.

Last week, after a 2,700-mile road trip from Los Angeles to Philadelphia, something in my sick mind convinced me that hopping on a train to D.C. was a great idea. Yes, there are many things for me in the District, but it was also the weekend of Trillectro, D.C.’s first hip-hop and electronic dance music (EDM) festival.

For many, the lineup was the event’s main attraction, but for me, the festival would be the final test of my observations of the city up until that point.

On two separate occasions (2007 and 2011), the District was my temporary home, and with each experience came a set of preconceived notions and surprising results. As a bright-eyed 19-year-old Hill staffer, I came to D.C. well versed in The West Wing, still riding high off of Obama’s 2004 DNC speech, and sure that I had landed in the city of my dreams. After a year of college, I had come to embrace the ideology of “work hard, play hard,” but following a few weeks in D.C., all I was doing was mimicking my peers and superiors by “working hard” and then “going to sleep.” So when I left the District of Columbia in March of 2007, I became comfortable with the fact that D.C. was the city where the really serious kids went, and places like New York were where the fun kids landed.

But four years later, I had my second stint in the city, by way of a back-and-forth NYC/D.C. internship. After living in New York City for two years, I was sure that the D.C. weekdays of my summer would be all work and my NYC weekends would be all play. After a few weeks in the District, however, I found myself stumbling on scenes — late-night music scenes — that I thought were unheard of in the town. (To be fair, they were at night, but “late” is relative, seeing that it’s Washington, D.C., and at 1 a.m. the venues would begin clearing out, since 75 percent of the minimum bachelor’s-degreed crowd had to be in a suit or pencil skirt in seven hours.) As the summer pushed on, I started scheduling additional midweek trips to D.C., not to maximize my work time, but to take in the new, exciting, diverse crowds that were seeking out fun in a place that I genuinely thought shunned anything that wasn’t a 90-minute happy hour or a staff softball game. D.C. was changing, and I loved it.

So there I was, back in the nation’s capital for this new music festival, the D.C. fun/not fun score being tied 1-1, determined to see if there was actually a critical mass of cool in D.C., or if the group of friends I had latched onto happened to be the only fun people in town. That was the real reason I made my way to the Half Street Fairgrounds, the venue that sits nicely in the shadow of the Washington Nationals baseball stadium.

Sure, I cared about the two headliners (rapper Schoolboy Q and DJ duo Flosstradamus) as well as some of the great smaller acts (Phony Ppl and Flatbush Zombies, both awesome crews of Brooklyn kids) and popular D.C.-based artists (Tabi Bonney, Tittsworth, Oddisee), but that wasn’t why I added another 350 miles to my long journey back to New York City. Even as an non-native, I felt the need to be present at this cultural watershed moment for Washington, D.C. I wanted to see if the masses would show up, and if they did, I needed to witness how they would respond to perhaps the coolest thing to happen to their city since Election Night 2008.

Well, they showed up. All of them. An estimated 5,000 people came through the noon-midnight festival, a startling number considering that this entire endeavor started as a grassroots effort. The outdoor venue was packed, and every person there, especially those that grew up and lived in D.C., seemed to be in a constant state of disbelief that this was happening in their backyard.

As an outsider looking in, my disbelief came less from the fact that it was happening, and more from the demographics of the festivalgoers. No one group dominated the festival. It wasn’t just hipsters, but boy, were there a lot. And it wasn’t just black kids, but we were out in droves. It wasn’t just white kids, either, but most were having the time of their lives. And it wasn’t just twentysomethings, with sizable groups of older and younger music fans marveling at what was taking place in Southeast Washington. The only way to describe it was “D.C.” — Washington, D.C., was in attendance and it was a sight to see.

By way of ticket sales and positive press, Trillectro was a success, leading one to believe there will be a Trillectro 2: Electric Boogaloo. It will be larger, it will be more publicized, there will be more sponsors, as is the case with anything cool and buzzed-about in America. More out-of-towners will make the journey to take part. But for now, three days after the event, it’s great to feel the city still buzzing from afar, due to what the festival says about its residence and projects to outsiders.

Many a second-tier city has had its honeymoon period after being declared the new cool city. There was that Portland thing, the time everyone wanted to move to Austin, and of course, due to all those rap songs and free houses, the string of years when Atlanta was the center of the universe. After years of existing as the most influential one-horse town, it looks as if it’s D.C.’s turn to get some of that love.

Maybe it’s time to take my talents down to the DMV. I’ve always had a little thing for cherry blossoms.

Filed Under: EDM, Hip Hop, We Went there