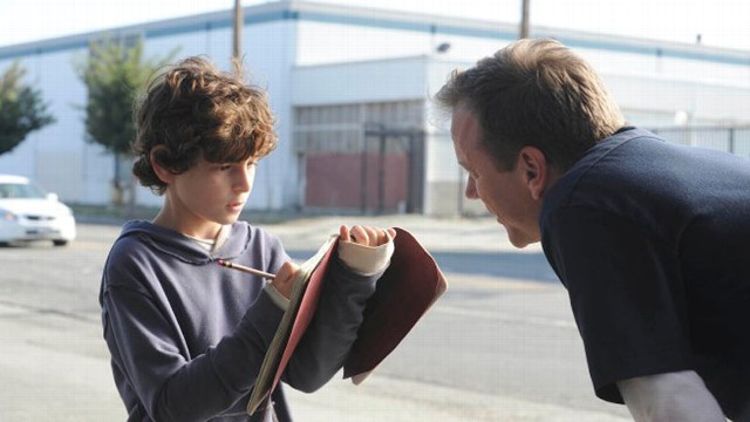 “Galaxies, plants, seashells … these patterns never lie.” So goes the opening monologue of Fox’s Touch, a sensitive sci-fi series that sneak-previewed last night. (New episodes begin airing in March.) The same might be said of ambitious network television pilots that tend to be nothing if not predictable. To wit: If there are characters introduced on opposite ends of the globe you can bet they’ll be united before long; if you’ve got someone as gorgeous as Gugu Mbatha-Raw cast as an adversarial skeptic chances are her doubts will melt faster than an ice cube in a blast furnace; and if a kid doesn’t like contact at the start, you just know we’re on an expressway ride to Hug Town. These familiar iterations may lack the numeric poetry of the Fibonacci sequence, but calling attention to them shouldn’t detract from the striving pleasures of Touch, a show that wisely (for its own sake) asks us to believe that everything on Earth is greater than the sum of its parts.

Written by Heroes creator Tim Kring, Touch concerns the otherworldly abilities of a cherubic, maybe-sorta autistic child named Jake. (Along with the moppet from Extremely Loud & Incredibly Close and this kid, magic adolescents are kind of having a moment!) Despite delivering the aforementioned monologue with perfect diction, Jake, we quickly learn, has never spoken. Certainly not to his father, Martin (Kiefer Sutherland, off the testosterone supplements), with whom he shares an exorbitantly well-appointed loft in the Meatpacking District, and apparently not to anyone else either. Instead, Jake — who is one red tracksuit away from going full Tenenbaum — lives inside his own head, scribbling numbers in moleskin notebooks and occasionally climbing a cellphone tower somewhere in Queens. Martin does his best to keep Jake mollified with popcorn and Sunkist but he’s fairly wacked himself: a brooding 9/11 widower, he now works as a baggage handler at JFK. The job’s only perk is collecting lost cellphones for Jake, who, we learn, enjoys dismantling them with all the glee of a wronged AT&T subscriber. Sutherland underplays Martin’s anguish well, although it’s disconcerting to see Jack Bauer fecklessly take a punch and suffer from paralyzing acrophobia. (Some CTU-acquired skills remain, however, such as the ability to make it from the far West Side of Manhattan to Grand Central Station in under 15 minutes.)

As Jake’s behavior becomes more and more extreme — he’s resetting clocks to 3:18 in the morning, staring ominously at school buses and snatching lottery tickets from The Man in Black — Child Services comes a-calling in the comely form of Mbatha-Raw. A stressful life, Gugu coos to Martin, can “drive us to see meaning where there isn’t any.” But, of course, there’s plenty of meaning here. First Danny Glover — who at this point is indisputably too old for this shit — as a discredited, bathrobe-bound crank (a character last seen a year ago on Rubicon) hammily bends Martin’s ear about an evolutionary leap forward, insisting that Jake doesn’t speak because verbal communication is as inessential as prehensile tails. Then the coincidences start piling up faster than the lines on Kiefer’s face: 318 was both a date and a time. The Man in Black is a grief-stricken firefighter named Randall Meade who was unable to rescue Martin’s wife on 9/11 but now has won the lottery in her memory. And thanks to Martin’s punchy revenge, Randall misses his train and instead saves the previously seen school bus from fiery ruin. In the background of all this, a random cellphone with the battery life of a class C carbon star skips its way around the globe, making a celebrity out of a Muzak-slinging call center operator in Dublin, a fool out of a straying Japanese salaryman in Kuwait, and an emotional wreck out of an English kitchen supply salesman in the center of Shibuya.

Sure, all of this tidy wizardry borders on the preposterous — particularly in the case of the Chris Rock-loving Baghdadi boy who somehow receives a free oven in exchange for not detonating a suicide bomb, a decision that I’m sure the terrorists he defied will be super cool with in the future (maybe they’ll be mollified by free pita?) — but damn if it’s not effective. The universal desire that Mbatha-Raw’s Clea speaks of, the inclination we all have to see reassuring patterns in our arbitrary existence, is, after all, the same engine that fuels all scripted entertainment. What is television writing, really, other than the art of manufacturing coincidence? For Kring to so boldly call attention to the strings of his own enterprise is risky, but also thrilling — and it helps that his pilot script is as tautly woven as any we’ve seen in years. (You try introducing a plot, premise, protagonists, and a globe-spanning run of Quicktime shenanigans in under 60 pages. Or, better yet, don’t.) Where we go from here is unclear. Is Touch a mushy procedural about human nature? Or a nerdy serial about the rise of a master race of dimpled mutants? Or both? (Call it Lost by an Angel.)

Regardless of what’s to come, it’s great fun to see a show so willing to embrace its own artifice. On television, everything is always connected. Touch dares to celebrate the magic at the heart of the tired old machinery.

We Found It On Watch Instantly: The Butterfly Effect 3: Revelations