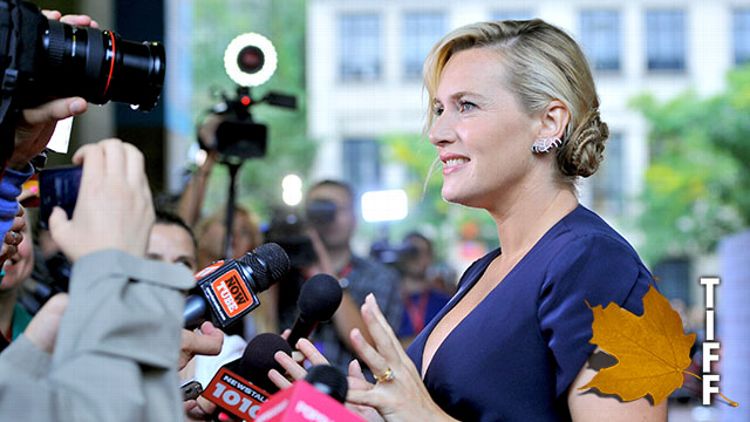 Most people come to Toronto looking for the best the movies can do. Many films will reach for greatness. Few will attain it. Then there are movies that don’t even reach. They’re armless! This year one of those movies asks you to believe Kate Winslet as a shut-in single mother who comes out of her shell after Josh Brolin escapes from prison and holds her and her son hostage in their New England house. He’s not really holding them hostage. And they’re not hostages for long. He’s doing home repairs and fixing the car and, in one of the most ludicrous moments I’ve seen in any movie in many years, showing mother and son how to make a pie. Everybody’s hands mix the peach filling. There are more loving shots of that pie cooking in the oven than there are of Winslet.

This movie’s a drama called Labor Day. It opens Christmas Day and is based on a highly implausible 2009 novel by Joyce Maynard, whose memories of her affair with J.D. Salinger give the execrable new documentary about Salinger its only drama. And the screenwriter and director is Jason Reitman, and wherever he seemed to be headed after Up in the Air and Young Adult, it’s a shame to see him responsible for a movie so flavorless and that makes so little sense. This is the kind of movie that requires a lot of people — Tobey Maguire, Brooke Smith, James Van Der Beek — to ignore common sense.

Reitman seems taken with the florid pretensions of Maynard’s story, particularly her coming-of-age framing. Yes, even with strategically dispersed flashbacks, we never know exactly what’s going on with Winslet and Brolin because most of the film is told from the point of view of a seventh-grader, which, I’m sad to report, is just about the emotional level of this movie. You know how satires of award shows have fake clips of actors performing earnest-looking nonsense (like a mom and son baking a pie with an escaped convict)? That’s Labor Day: a movie so blandly absurd it could only be a joke on bland absurdity.

Here’s today’s good news. I saw a movie with arms this morning. Big, steroidally strong arms, arms that reached for the sky and wound up touching satellites. I saw Alfonso Cuarón’s Gravity. It opens in three weeks, but for now I’ll just say: holy shit. It’s just an hour and a half of pop moviemaking (Sandra Bullock and George Clooney, space-lost and in 3-D), but it’s moviemaking conducted at such a high level of care and craftsmanship and consideration for what we want from a movie at every level that it obviates nearly every Hollywood blockbuster released in the past 18 months.

Even with a film I’m loving, at some point I’m taking notes. With Gravity, I reached for my pen and didn’t know what to write. That’s because I couldn’t concentrate on anything beyond what Cuarón had put on the screen, which is state-of-the-art special effects and, eventually, Bullock at the tippy top of her Bullockness (the dramedy of determination defeating self-doubt). On the way out, a mildly unimpressed guy asked his friend of Bullock, “Do you think she’ll ever top Speed?” “She just did,” said his friend. But the first guy was skeptical: “I don’t knooooow …”