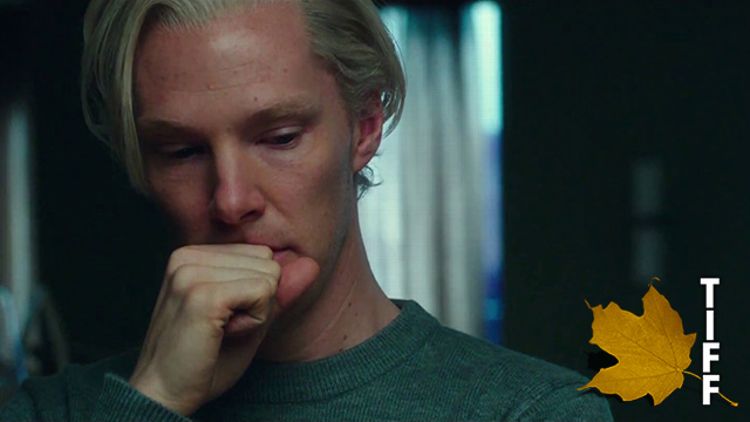 Those who don’t plan on seeing movies at the Toronto International Film Festival do plan on seeing stars. That plan includes loitering at the airport, spending the day positioned behind guardrails, and doing that thing where you pretend to be totally cool when you recognize someone famous at a deli or Foot Locker or crossing the street but, really, you’re freaking out. Today, near the Ritz-Carlton, I saw a young woman in a too-big Star Trek Into Darkness T-shirt asking strangers whether “he” was staying there.

In this town right now, “he” could be anybody, but for her, it was English actor Benedict Cumberbatch. You don’t need to know where he’s staying to get your fix. He won’t go away. He’s in three movies at the festival this year and on the cover of a magazine that comes free in my hotel. (It’s called Where.) I’d say playing Sherlock Holmes, Khan Noonien Singh, and now Julian Assange is rigging the false-idol-worship game for maximum adulation. Playing only one of those guys would guarantee a life of rabid fandom. Playing all three ensures a life of standing O’s at all kinds of conventions.

Cumberbatch plays Assange in The Fifth Estate, a thriller taken from two books about the information-transparency site WikiLeaks, which had its premiere this evening. It opens next month, so for now I’ll just say that it’s a timely government potboiler that doesn’t get good until it’s too late. The man who directed it — Bill Condon — also made Gods and Monsters, Kinsey, Dreamgirls, and the last two Twilight movies. But anyone hoping that someone from the State Department sings “And I Am Telling You I’m Not Going” will be disappointed. This version of Assange, with his vaguely autistic narcissism, is saying “And you! And you! And you! You’re gonna love meeeeeee!” Meanwhile, the white hair and flamboyant body language are Volturi all the way.

But Condon seems elated to be back in the arms of adult material. The script, by Josh Singer, is smart enough about how to build international drama out of hackers sitting at computers. It focuses on the relationship between Assange’s Australian weirdo and German programmer Daniel Domscheit-Berg (played by Daniel Brühl). The movie is torn over how to feel about WikiLeaks and how much it disdains state secrecy, and that ambivalence gives the proceedings its tension. But the manic camerawork, nonstop electronica, and attempts to turn code-jockeying into the stuff of fantasy (when Julian and Daniel work, they’re transported to some sort of sandy programming beach where the desks go forever) suggest that Condon still tans by Twilight.

Once the leaks swell, the movie hits its pulp-intellectual moral stride. It stops lurching across the planet and starts jumping. I’m usually apprehensive about the Aaron Sorkin touch. His gloss turns greasy quick. But in The Fifth Estate you crave the wit and structure he brought to the mystery over who founded Facebook. As good as Cumberbatch is (by the last 20 minutes he’s very good), the movie wants to do and say so much about the freedom of the press and the future of the media that it needs a more outsize Assange than Cumberbatch is willing to play. His subtlety seems fair. Laura Linney and Stanley Tucci do smart, actorly acting as diplomats compromised after Army Private Bradley Manning infamously takes his megaleak; David Thewlis plays a preachy reporter at the Guardian; and Cumberbatch’s Assange already looks like the bad guy in a Lethal Weapon movie. Why overdo it? He makes the character an extrovert but a passive-aggressive one. He’s lord of the antisocial network.