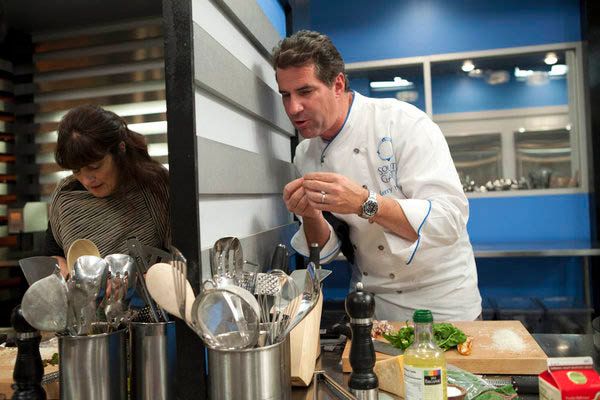 Last week, the remaining chefs were subjected to the “foodie flash mob” picnic Dîner en Blanc and its attendant mimes and critics. Cosentino’s terrine scored him the win, while Patricia’s high-concept beefy jam–and–flatbread combo got her sent home. And then there were three: Lorena, Cosentino, and Kerry.

As soon as the triumvirate walks into the kitchen and sees the partitions, psychic Cosentino knows the score. Yes, it’s “cooking through the wall” time, a communication-testing Quickfire during which the chefs must instruct a mystery teammate on the other side of the partition on how to make a dish that they simultaneously cook themselves. Kerry chimes in that it pays to be nice in this one, and we are treated to a flashback to Season 3 to see Naomi Pomeroy tearing her mystery partner a new one as she screams for him to taste the mushrooms, TASTE THE MUSHROOMS, and then discovers that her partner was her dad. After 20 minutes, the teams will be judged on how well their dishes resemble one another and the overall quality of the result. This time, the mystery teammates are the judges, Reichl, Oseland, and Lam. I would both love and hate to be a mystery teammate on this challenge — I’ve never seen any of these judges cook, and it’s probably tough to be a critic put to the test against the final three Top Chef Masters. I’d be so afraid to show my ignorance after judging these people all season. I’d probably throw up into my demi-glace.

Reichl is paired with Kerry, Oseland with Cosentino, and Lam with Lorena. Reichl clearly enjoys sporting an — I don’t know, Russian? — accent, which probably (evilly) makes it a lot more difficult for Kerry to hear her from beyond the barrier. This version of the challenge seems slightly easier than in previous seasons, at least, because the judges probably have more skill in the kitchen than, say, Naomi’s dad. Lorena hits the skids a little bit when her pasta isn’t done with two minutes to go and her teammate’s water hasn’t even started boiling, so she scraps the starch and chops some greens as a substitute. After the walls are rolled away by mysterious men in black shirts, everyone has a good guffaw at the reveal, probably to hide their disappointment at not seeing their family members with whom they could hit the slots later. No, instead it’s “Mr. Sweater Himself” James Oseland & Co., and none of the chefs had any idea despite the fact that they hear these people’s voices drone on for hours at every single taping (and I really can’t convince myself that James Oseland doesn’t wear a signature cologne).

Chris’s prawns with sautéed celery, thyme, and pine nuts looks a lot like Oseland’s copy, and when Curtis “can’t decide which one” he likes more, Oseland just tells him to “shut the f— up.” This season of TCM has been inching its way toward a critical mass of punchiness for a while now, and in this moment, I miss Art Smith and his eye-rolls drenched in sassy gravy. Lorena’s Swiss chard with chicken, onions, and Parmesan looks really soupy in comparison to Lam’s, which apparently was the way she wanted it back when the chard was pasta, when hope was high and life was worth living. Still, Lam’s is similar, so Lorena thinks they might have a shot. Kerry’s dish is eerily similar to Lorena’s (sautéed chicken, Swiss chard, bacon, Parmesan, cream), but Ruth’s dish looks very different portion-wise due to Kerry’s omission of instructing her on what to do with the chicken tenders. Stone judges Reichl’s chicken to be a little bit better than Kerry’s, which has got to sting, but Kerry just chortles the pain away. I assume he’ll deal with that later in therapy, especially since he is under the illusion that were it not for the big-chicken/small-chicken problem, he and Ruth would have won. With Curtis as judge and jury, Cosentino’s prawns take the prize and get him another $5,000 for the Michael J. Fox Foundation, for a grand total of $41,000 over the course of the competition.

For the elimination challenge, Curtis explains that “more than 200 Las Vegas schools don’t meet progress standards in education” and that the Southwest Career and Technical Academy offers a program in the culinary arts to high school students to get them jazzed on learning. I pause here for a minute to creep out into the dark evening and weep quietly on my balcony because my high school didn’t offer home economics and never gave us robots or eggs to pretend were our babies and keep us from becoming teen parents; we were never instructed on how to roast chickens or build coat racks or prime walls, and as a result the closest I came to cooking anything in high school was dissecting a formaldehyde-ceviched fetal pig. I think a modern home ec without the gender bias would have been a great way to get me to do my homework, which I imagine would have been eating doughnuts to gauge their yeast content or sitting in a hammock to become one with the nylon threads. Alas! Alas! A youth misspent! I never made my mother a wreath out of cranberries and my GPA almost certainly would have been .01 higher.

Each chef gets two top culinary students to guide through creating a “masterful” dish. The chefs don’t get to do any of the cooking; it’s all kids all the time. Lorena is petrified. The judges are, besides the usual suspects, the kids’ teachers and parents.

The chefs draw knives to determine the students they’ll mentor. The chefs then go into the kitchen to meet their pupils and taste the dishes they’ve prepared that will be reinterpreted for the challenge. Obviously these teenagers are crazy nervous, so Cosentino, Lorena, and Kerry try to loosen them up by asking them awkward questions and touching their arms in a mentorly way. Cosentino’s kids prepared a pork tenderloin with garlic mashed potatoes, Kerry’s did a chicken Florentine (with string cheese, yikes), and Lorena’s whipped up a lasagna with crostini. Because pork is Chris’s main thang, he reinterprets the dish to represent what pigs eat (apples and, obviously, because these are fancy swine, hazelnuts and watercress); apparently Chris was voted “most likely to end up in prison” while in high school, maybe because, as a photo shows, he used to have Guy Fieri hair. This either puts his students at ease, or makes them hide one of their paring knives in their aprons just in case. Lorena struggles with elevating a lasagna, because lasagna is inherently lowly (oh, lady! Is it?), and Kerry makes a vague suggestion to change tactics because I think he’s still shuddering from the suggestion of Polly-O.

In the backseat van ride to the grocery store, the chefs take different approaches to warm up their charges, and I think this will be an important factor in how things play out in the challenge. Chris definitely has the best dynamic with his team, showing them his pig tattoo and telling them that he’s going to make everything easy and fun, while Lorena is uncharacteristically uptight and keeps mentioning creepily career-counsellory things like “The money will come.” Kerry busts out a notepad, and references The Godfather in vain while his children stare solemnly ahead thinking about One Direction and if their voices will crack when they ask the driver to turn up the air conditioning. Chris also takes a more instructional approach in the grocery store, while Kerry just heaps his hopes on the idea that children are “dry sponges” and don’t need any hand-holding. I think Chris has this in the bag, even though his kids finish five minutes ahead of time and he’s left worrying about what’s happening to his salad as it sits. With two and a half hours to prep and cook, Kerry is feeling the pressure like whoa. He’s pretty critical, and I wouldn’t want to be on his team. I wonder if he’s punishing them because they haven’t seen The Godfather. Lorena and Chris are way more encouraging and better at getting the kids to loosen up.

Cosentino and his students are up first with their pork tenderloin with hazelnut brown butter, apples and watercress. The judges love it and the parents cry. That was the aim of this challenge, I feel. Lorena’s family-style three-meat lasagna with baby arugula salad is also well-received, though one of Lorena’s students gets busted by her mom for not cooking at home. Not anymore, I bet. Kerry’s Florentine-inspired chicken with orzo and asparagus ragout impresses the judges most of all, however, causing James Oseland to throw out a diamond-plated compliment (“best creamed spinach I ever had”) and it looks like Kerry’s ball-busting paid off. That’s sort of sad, because his kids looked as though they had the least fun in the process, but I guess all of that chicken-bone-browning under duress paid off. At critic’s table, Oseland says he could tell that Cosentino’s salad had relaxed for a few minutes before it was served, and Curtis asks him if he feels as though he didn’t push his students hard enough. Yikes. And indeed, Kerry wins, because life is very unfair and the time to learn this is as a teenager, when you’re getting yelled at because of the width of your asparagus. Lorena and Chris are sent back to the wine room while the judges deliberate: Reichl slams Lorena’s dish for not being restaurant-quality, inspiring Oseland to say, “Miss Reichl, do you need an exorcist?” She “feels really strongly about it,” OK? Oseland defends it, but I agree that maybe the presentation could have been a little snazzier (please spare Chris. I LOVE HIM, PLEASE SPARE HIM). Lam defends Chris’s salad, God bless him, and maybe it was this that saved him. Lorena is axed, having won $27,500 for her charity, the Alliance for a Healthier Generation.

Next week, Cosentino and Kerry go head to head and I will emerge with no fingernails. No offense to Kerry, but Chris’s performance has outshined his throughout this whole competition and if he loses, the kitten gets it. With a hundred thousand dollars on the line, it looks like Chris is pureeing some blood and guts (great idea! No, bad idea!). A panel of diners, all wearing glasses, look like they will be extremely harsh. It’s finale time, bitches. Place your bets.