Todd Glass Comes Out on Marc Maron’s Podcast: ‘When Are You Gonna Have a Little Blood on Your Shirt?’ 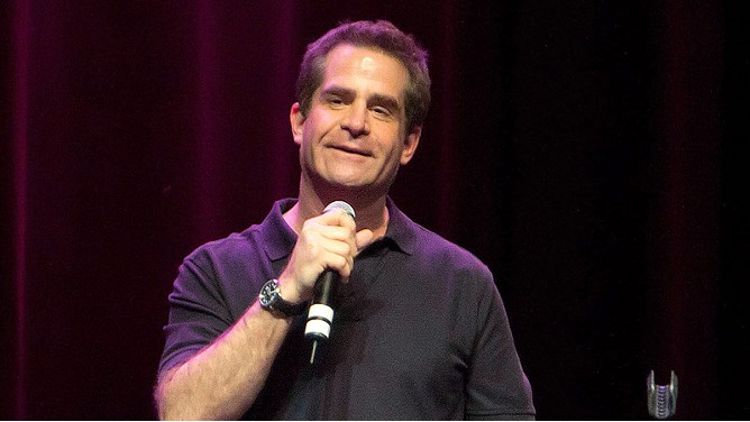 Todd Glass, the 47-year-old stand-up comedy veteran (who’s appeared on Jimmy Kimmel Live!, Last Comic Standing, Louie, and The Sarah Silverman Program, among many other shows) came out on Marc Maron’s WTF podcast yesterday. Even if you’re not already a fan of Glass, the whole hour-plus is well worth your time: Somehow, the dude manages to be simultaneously unreservedly honest about his reasons for waiting this long, earnestly passionate about why he’s admitting the truth now, and really funny.

First up, Glass addresses how recent teen suicides influenced his decision to discuss his sexuality publicly: “I know it sounds maybe cliché, but it’s so much from my fucking soul — I cannot listen to stories about kids killing themselves any longer and not think, ‘When are you gonna have a little blood on your shirt for not being honest about who you are?’ You hear it in the news … but any fucking human being anywhere that didn’t make it in to the paper. I can’t do this any longer. But I thought that a year ago: I gotta do it. And if I do it in a public forum, then I can maybe do something to help kids. Whether it’s a campaign, or being honest on stage … now everybody knows.”

Glass goes on to explain that his close circle of friends and his parents have known for a long time, and that he has many other pals and acquaintances who he’s sure knew as well without him ever saying it. To his credit, he’s able to admit that the reason he hadn’t been honest earlier was because he was afraid. He shares an anecdote with Maron about recently reconnecting with some childhood friends, who ask about his dating life: “‘You got a girlfriend? You got a boyfriend?’ And I go, ‘Yeah, I’m still with the same girl.’ I get in the car and go, ‘What the fuck am I doing?! I’m holding on to this to the bitter end!’ And by the way I’m probably going to in certain situations … whenever you’re somewhere, at the department store, and someone says, ‘Who is this for?’ ‘Oh, it’s for my … ?’” And here Maron jokingly interjects: “It’s for my roommate?” Glass: “No, I won’t say that, because that’s embarrassing. I will not be that guy. You know these guys, they’re like 70. [Comical old man voice:] ‘It’s my accountant.’ Accountant? Really? He lives with you? [Comical old man voice:] ‘We’re very close.’”

Glass goes on to explain how he grew to be embarrassed: “I’m referencing ’89, ’90. If I told somebody, then they’d be afraid to drink out of my cup because of the AIDS thing. I was thinking, should I understand that? I wasn’t educated either.” He admits that, if he was out with a girl who had a crush on him, he’d get “sloppy drunk” until she’d change her mind. And at the heights of his self-denial, Glass “was hoping I’d marry someone with cancer. A girl. And she’d die. Oh, that’s what I’ll tell people: I never got married again because I never got over my wife who had cancer. Maybe I’ll meet a girl and find out she had cancer!”

As amusing as Glass manages to be on the podcast, he’s clearly, understandably having a hard time with the whole thing. It’s always fascinating to hear someone be this direct and honest, but this is also a heavy reminder that even in a progressive-seeming field like comedy, being out can be extremely difficult. It makes you once again appreciate something like the memorable poker scene from Louie, in which Rick Crom subtly schools a room full of straight guys: “You ask me this shit every time I’m here. I talk about gay sex more with you guys than I do any of my gay friends. You guys are obsessed.” And how hard this whole thing is for Glass makes you really appreciate him, too, for spilling his guts on WTF, and for railing against anti-gay-marriage politicians: “They’re ruining [kids]! You’re sucking the fucking soul out of them! And you’re wrong!”