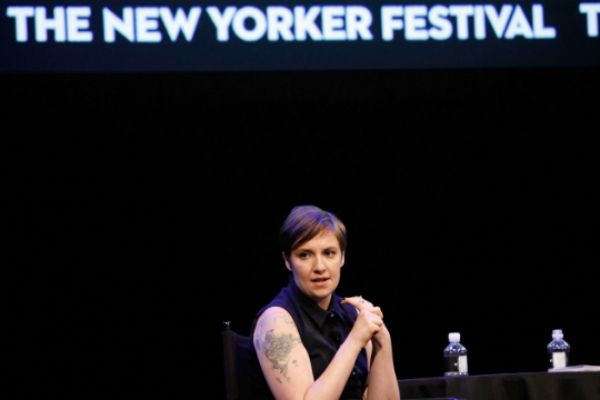 The second season of Girls doesn’t premiere until January, but Lena Dunham cannot and/or will not stop. Confirmed a couple hours ago: After a furious few days of bidding, Dunham has landed an advance of over $3.5 million with Random House for her debut essay collection, Not That Kind of Girl: A Young Woman Tells You What She’s Learned. Not that it’s at all the same thing, but just for the sake of comparison from the non-publishing world: Drake signed for $2 million, and A$AP Rocky signed for $3 million, and in that deal he owed the label his solo album plus a bunch of material from his A$AP-affiliated underlings. So imagine how much Lena would have taken Random House for if she’d thrown in an Adam Driver workout tape or something?

At this weekend’s New Yorker Festival, Dunham was interviewed by the magazine’s TV critic Emily Nussbaum, and talked briefly about the motivation behind the book (you know, besides the $3.5 million). So don’t get all huffy about a 26-year-old doling out advice just yet — yes, it’s partially tongue in cheek: “I love self-help,” Dunham said. “I’m fascinated by why people think they’re qualified. I read He’s Just Not That Into You and Let’s Face It, You’re Just Not That Into Him, and I didn’t take either of them seriously but I was so fascinated by a person who had gotten to a place where they were literally a dating pro. That idea that you could master the most mysterious human emotion and then write a book about how to handle it properly was so fascinating to me.”

The New York Times also got its hands on a copy of the 66-page proposal that was being shopped to publishing houses, and says “the book will cover topics like work, friendship, travel, sex, love and mortality. One chapter is described as ‘an account of some radically and hilariously inappropriate ways I have been treated at work/by professionals because of my age and gender.’ Another chapter, titled ‘Body,’ reads, ‘Red lipstick with a sunburn: How to dress for a business meeting and other hard-earned fashion lessons from the size 10 who went to the Met Ball.'”

Not enough Dunham to satiate your daily needs? Don’t worry, we’ve got more! That whole New Yorker Festival interview is available to stream for a small fee over at Fora.TV, but Grantland also attended the event, and has gone ahead and compiled some notable bits — from Hannah Horvath’s dating futures to HBO’s sperm warnings — below. Today in Lena Dunham starts … right now:

[Warning: Some spoilers for the upcoming season of Girls follow.]

In regard to that unseemly tweet sent out by a former Girls writer (“What really bothered me most about Precious was that there was no representation of ME”) in response to the lack of diversity on the show: “How I work with the writers, I’ll have a month-and-a-half-long brainstorming period, then once we go into shooting they’re no longer a part of that staff. Firstly, I’m not interested in doing a public firing of anyone. That’s something I’ll work out with my staff. Secondly, she had already moved on to something else at that point. It was upsetting because it was the kind of tweet that I would have seen on Twitter and been like gaaaah [pulls at collar] even had I not been associated with it. I felt like … I will take responsibility for what I said, but issuing a public statement to cover up someone else’s defense of a work that they didn’t really make was just not on my agenda.”

In the second season, Hannah Horvath and Donald Glover get it on. Says Dunham, “He’s someone who I’d wanted to work with since the first season. I’ve been a fan of his since he was doing sketch comedy stuff at NYU and I was looking for the right moment. Not to give too much away, but Hannah had such a specific romantic thing happening in the first season, I didn’t want him to be fly-by-night, and I kind of didn’t want to share him with anybody, because he’s just so adorable.”

In the original version of Jessa and Thomas-John’s wedding vows on the season finale, the latter makes all kind of explicit financial promises about funding boutiques and handbag lines: “He’s Irish and even though he was doing an American accent, he said, ‘I promise to help you start a lip pot collection,’ which I think means Chapstick where he’s from?” But then: “I felt, in the edit, it took away from the sense that they might actually be in love. [Maybe it’ll be a] totally blissful union … maybe it is gonna work. We don’t know yet!” And also: “Chris O’Dowd [who plays Thomas-John] is back, and I’m excited by his arc. I hope it entertains you all.”

“I wrote [some] exact facsimiles of relationships in my real life. Adam started out [like that but] the person I dated never became really sweet and appeared at a party and screamed ‘Be my girlfriend!’ in my face. The Marnie relationship is based on my relationship with my best friend, which has been long and intense and complicated. The Thomas-John character was a little bit based on someone who I hung out with one night and I was like, ‘You are a horror show!’ In the second season the characters have become so completely owned by the actors that play them, and we started writing to the people they’ve become. We don’t just follow the life threads of the people that they’re based on.”

“I was sitting at the Emmys next to my mom. I had already staked out where [Louie C.K.] was and was planning my attack for later. And then during a commercial break he came over and he said ‘Stand up!’ and then he gave me a really nice hug and said — I sound like I’m bragging but it was really the best — ‘What you’re doing is important’ and then the commercial break was over and he went back to his seat. And I said, ‘I dressed as you for Halloween,’ and he said ‘You’re too much’ and kept walking.”

Sperm Flying Through the Air

“We did shoot sperm flying through the air and hitting him in the chest” in the scene where Adam masturbates. “HBO really indulged us and let us do a cut with that in. Then they were like, ‘Don’t do the sperm.’ It wasn’t even a network being like, ‘We can’t put sperm on TV.’ It was more like, ‘It’s not cool. Don’t be a jerk with the sperm.’ At first I was like, ‘We probably wanna see the top of the penis?’ And [director Jesse Peretz] was like ‘Lena, we don’t wanna see top of penis.'” She has one regret: “I feel like we made the thing” — the penis prop Driver was using to simulate the sex act — “too big. It looks crazy. It’s a whole distracting other element. We were fine with a normal-size penis. He didn’t need to be doing that and literally have a two-foot penis.” Also: “Adam kind of stays in character between takes a little bit. [That day] he’s whacking his dildo around and yelling things at people.”