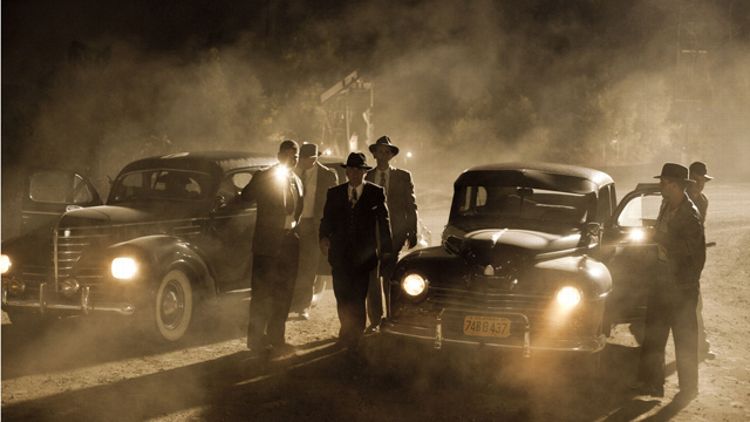 TNT’s been watching your pool party, Twitter. It sees your TV hashtags and live-tweeted finales splashing in the shallow end, your blue-checkmark-verified actors doing fancy tricks off the diving board. And now TNT’s jumping in with its own cannonball, tweeting a complete multimedia adaptation of Mob City‘s pilot script. A press release first coins the term adaptweetion, then buzzes that “the Twittersphere will be transported back to gritty 1940s Los Angeles 140 characters at a time. The story will unfold gradually over three days, taking followers to the point just before the end of the first episode, when a shocking turn of events occurs.” And that’s where they get you. (The word adaptweetion is not where they get you.)

So. Adaptweetion. At its worst, the plan is ambitious and fairly thought-out; at its best, it’s very cool and exciting. Most potentially obnoxious aspects seem to have been covered. For example, backtracking to experience a full narrative on Twitter can be a pain. So there’s a dedicated website compiling the story in order; the site is sleek, functional, and sports no fewer than two countdown clocks. Some of the tweets read a little rough on the site — “Thug1 prods him with the .38. THUG1: This look like a robbery? SHORT GUY: My mistake. Could be the guns. #MobScript” — but photos and Vines smooth over that roughness and make it presentable. The New York Times writes than 75 percent of the 400ish tweets will include media assets. (Also, that wonky example tweet doesn’t look at all bad on the actual Twitter feed; they’re using the return key without mercy, which is good etiquette in a situation like this.) This allows the casually interested prospective viewer to pop in for a single tweet and catch a looped video of an old-timey gangster firing a machine gun; it also allows screenwriting nerds/Darabont nerds/other assorted nerds to watch an entire script unfold — a script that a network liked a lot and paid a lot of money to make.

“The end result will be a complete screenplay accessorized with an abundance of rich media and fan interaction,” the press release beams. But who is this for, in the end? It comes across like a great DVD extra you’re encouraged to check out before seeing the product — one you have no idea if you’ll wind up enjoying. Potential viewers are obviously a target, but is there going to be much return on this creative investment? “Bringing the script to life in a different medium is designed to intrigue you so that you want to watch the premiere,” Tricia Melton, TNT’s senior VP of entertainment marketing and branding, tells the Times. “But this brings a different level of context and I think that it elevates Twitter as a platform because it takes it to a different level of storytelling experience.”

If a platform gets elevated but the engagement is weak, does it really count as elevation? I’m thinking here of Pulitzer-winning author Jennifer Egan’s bid to publish an 8,500-word short story over The New Yorker‘s Twitter feed last year. She’s one of my favorite authors; I breathlessly speculated about the event, ostensibly psyched to follow along. Then I just … didn’t. I caught up a year later, gulping all the tweets at once. Maybe that was a win for Egan and Twitter and the fiction-elevation game anyway? Maybe the point is something larger than “let’s gather around the computer tonight at eight and experience something as a culture again.” We’ll have to see how other networks riff off of TNT’s idea, and how Mob City‘s #adaptweetion works as a whole.