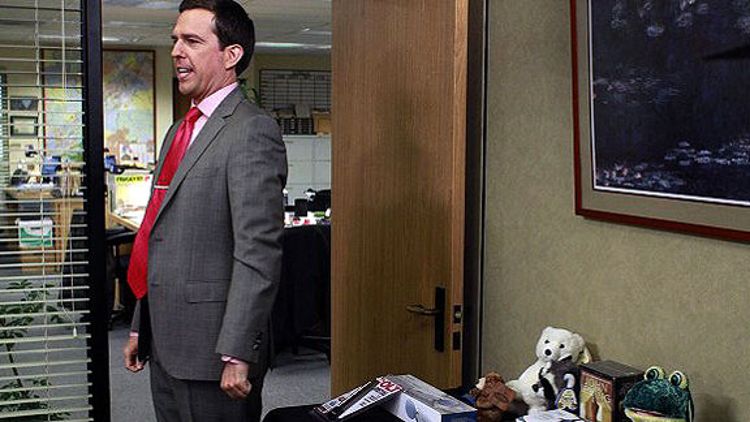 1. The Office
After last week’s enjoyable season premiere, I praised the possibility of The Office settling into its forward-momentum free, post-Carell late period in true Cheers-ian style, coasting comfortably like a wily pro on charisma, familiarity, and experience. Last night’s episode, “The Incentive,” revealed the downside of veteran leadership: It was creaky, stale and broke down noticeably in the fourth quarter.

But there was a larger sense that we’d seen this all before. James Spader’s Robert California, a character built on the premise of infallible action, is neutered just as all authority figures have been before him, from poor, “Suck It!”-inventing David Wallace through to Sabre rattler Jo Bennett. In a long-running sitcom, especially one in set in a single location, continuity is king. Not even the fearsome Charles Miner could stand in the way of Michael Scott’s reign of incompetence. And so last night we had the sight of California reduced for the second straight week to leadership mindgames without consequences while Ed Helms had to flopsweat his way through a very familiar sort of professional pickle: He needs everyone to do their jobs while still liking him. But because Andy Bernard was once part of the procrastinating masses, his treatment at the hands of his former peers felt cruel. Doesn’t Jim have anything better to do at this stage of his life than try and force a buddy to get an ass tattoo?

Worse, the assumption of Andy has only hastened last season’s worrying slide towards sentimentality (see last season’s “Andy’s Play” — or just pound a juice glass full of molasses instead). Ed Helms’s increasing panic as his plan works too well was fine — particularly his panic-call to a Cornell professor to discuss the practice of “de-incentivizing” — but the happy hugs at the end of the half-hour as the office has both doubled sales (in a single day!) and left the Nard Dog with a surprise tattoo of his own nickname didn’t so much ring false as they rang dull. The Office has a precarious balancing act: It’s about people working but not too hard, it’s about individuals who have grown to love each other but not too much. When the rhythm is off, the whole facade crumbles. “There’s something about an underdog that really inspires the unexceptional,” Spader smarms at the closing credits. Seems to me he could have easily been talking about the episode.

2. Whitney
Watching Whitney is like watching television in another language. A desperately less-funny language built on on the backs of broad takes, dated references, and retrograde cultural politics. The problem here isn’t the laugh-track per se, it’s the disconnect it highlights. “He’s not a bartender, he’s an artist,” says one character about an elusive mixologist. HAWHAWHAW brays the live studio audience — or, at least, the “live studio audience” button in the editing bay. Serious question: what about that was funny, exactly? It wasn’t a joke, it wasn’t an insight. It was an observation and a rather tame one. Yet the multi-camera beast must be fed and so the laughter rains down, alienating us even further. You could tell me this show was being broadcast in Bulgarian and it would elicit the same stone-faced reaction.

I didn’t want to hate Whitney. The snarky hordes that greeted last week’s premiere by brandishing their 30 Rock DVDs like high-class shurikens seemed unfair and more than a little mean. There’s room for all sorts of comedy on TV — even on NBC’s sacrosanct Thursday night. But last night was just terrible, the second week in a row to rely on bizarre relationship role-playing games to sex up a punchless half-hour. Worse, these stunts seem to betray the whole premise of the show, such as it is: that Whitney and her boyfriend and her boyfriend’s hair have a perfectly functional relationship, one doesn’t require marriage to validate it. And yet 100 percent of the aired episodes have been about spicing up their dull union — and guaranteeing Whitney herself some ill-advised sex-doll dress-up time. Let’s not even get started on Alex’s misogynistic cop friend (sure) who parades around shirtless complaining about how “women make their own money now” so you need to be mean to them. He’s a less believable dinosaur than the shiny cartoons chomping foliage over on Terra Nova. At the end of last night, Whitney and Alex reconcile over his gentelmanly act of ordering her a favorite cocktail: a vodka soda. Tasteless and cheap, it’s actually the perfect accompaniment to this show.

3. Parks and Recreation
Much will be written — and much deserves to be written — about the titanic Tammy-off that capped this enjoyable episode. Patricia Clarkson was devastatingly good as the Ron Swanson-delivering (and schooling; and dominating) “cold distant mother” April never had. Paula Pell, as the original Tammy, was perfect clomping around her gun-filled shack hollering about America. And Megan Mullaly deserves a special place in screen comedy heaven for the way she eye-raped Andy Dwyer alone.

But we’d rather hit the party button and revel in the slam-dunking, terrible nicknaming, iPad-distributing, champagne swilling ponzi scheme that is Entertainment 720. Together, Ben Schwartz’s douchetastic Jean-Ralphio (“get a thicker tie; it looks weird on you — makes your head look a fish) and Aziz Ansari’s Tom Haverford are able to consistently print their own joke money. But when you add Adam Scott’s slow-burning, accounting nerd Ben Wyatt to it, the result is comedy gold. And we’re not talking Swanson family decoy gold either. Paying someone upwards of $100,000 just to nap in front of a computer? As a freelancer, that’s not just totally Snapple — it’s the dream come true!

4. Community
“Geography of Global Conflict” was a definite improvement from last week’s meek pity party as it zeroed in on two of the show’s more reliable plot generators: Annie’s manic, competitive perfectionism and Britta’s vain altruistic streak. In the A-story (literally), Annie vs. Asian Annie allowed for a better deployment of Pierce (hateful crank vs. malevolent sociopath), introduced Martin Starr as the droll Professor Cligoris (either pronunciation is fine), and went full Boutros-Boutros Gali in an epic Model UN-off. “Ready, set . . . peace!” followed by a gunshot was the sort of small-bore chuckle Community usually skips over in favor of an overambitious guffaw, and the intradimensional climax worked both as something that would excite Abed and the intensely serious nerds who gravitate towards Model UN in the first place. As for Britta v. Chang, well, it was nice to see two Community members fully appreciate just how much they need one another, even if it had to happen from opposite sides of a dog cage or a lyrca body-suit covered in doll parts.

If only the same spirit had extended to the Jeff/Annie romance plot which went way over the top in soft-shoeing its way around the icky age difference between them (“You’re acting like a little school girl and not in a hot way!”) before, in typical Community fashion, undoing everything it had accomplished just because. And so Jeff and Annie reboot themselves back to zero at episode’s end, declaring their newfound maturity — and mutual googly eyes — “gross.” Keep undermining everything, Community! As Britta has proven, a life devoted to oppositional anarchy can really take you places in this world.